the ‘ministar‘ series of travel guitars offers a full sound in bodies that are not only as small as nineteen inches long but also appear to be lacking a central component: the guitar body. resembling elongated panels, the designs are the result of extensive research by american instrument designer bob wiley, who discovered that despite continuous controversy to the contrary, the body shape of a guitar is of little importance to its tone.

the ‘ministar’ series is thus composed of only the neck and head, along with a battery-powered headphone amp termed a ‘scamp’ (‘self-contained amp’). the scamp includes its own distortion circuit on electric guitar models and EQ and contour boost on basses. a volume knob– on/off in older models, continuous in newer versions– and various pickup selectors are also positioned at the lower end of the device. 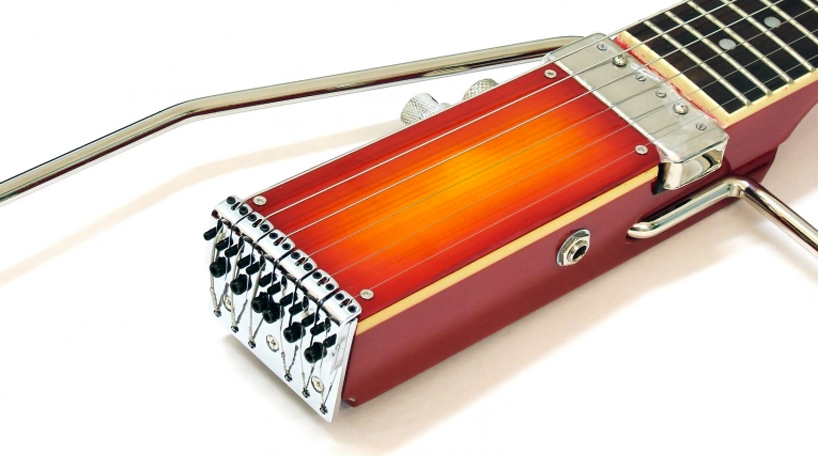 detail on base of ‘jazzstar pro’ in cherry sunburst 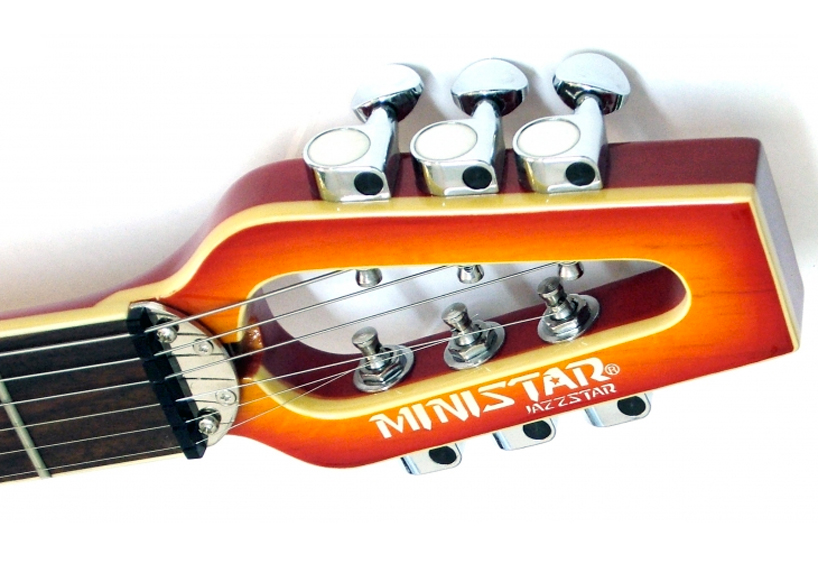 in another contrast to most conventional guitars, the ‘ministar’ utilizes a piece of wood that runs continuously from the top of the fingerboard to the end of the neck and headstock, providing a more solid platform on which the strings can vibrate. the cutaway center of the headstock positions the tuning components in a way that helps ensure rattle-free performance. all composed of a maple body, the devices vary in the composition of their fingerboards, athough all feature frets of nickel/silver alloy.

the metal antennae sticking out of the ‘ministars’ enable players to attach a strap to the guitar or perform while seated, with the left rod including an adjustable wooden plate on which the user can rest his picking hand. 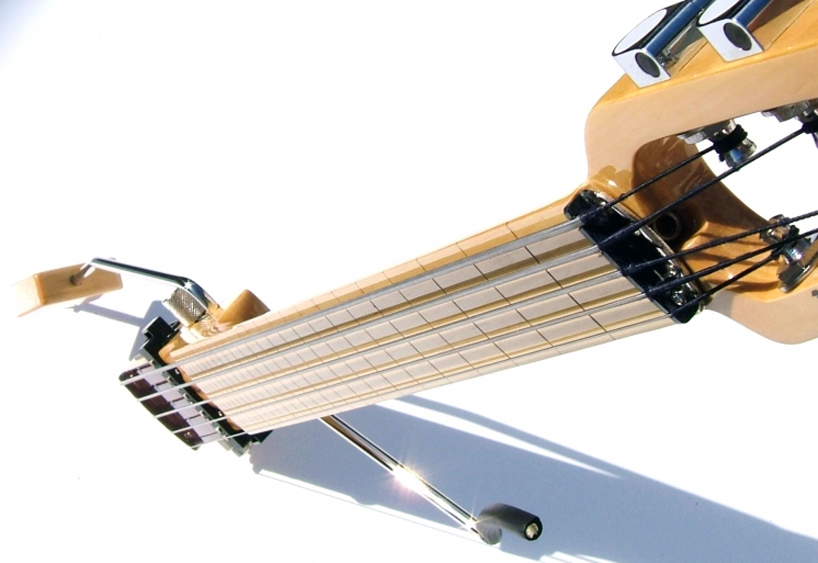 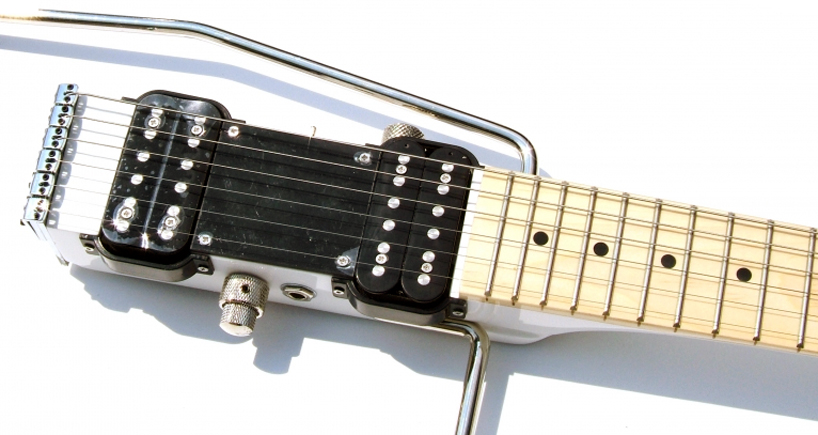 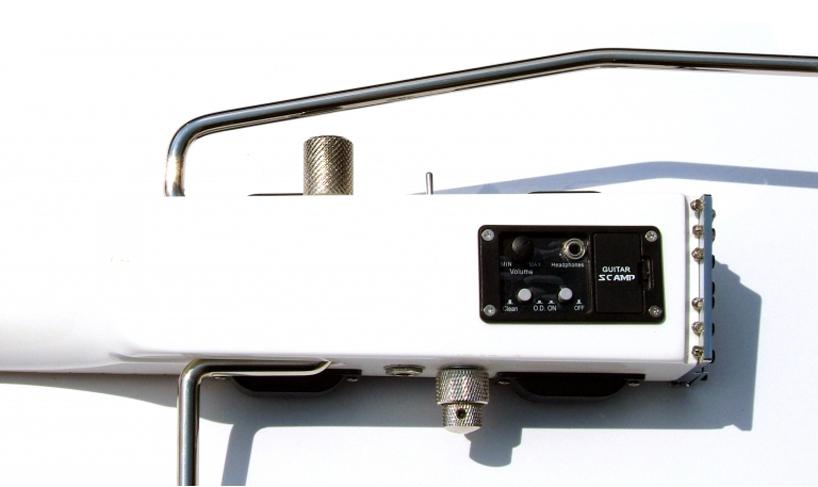 rear view of base, including the ‘scamp’, of ‘castar ii pro’ in gloss white

each guitar is optimized to achieve a particular sound. the ‘folkstar’ mimics a dreadnaught acoustic guitar, while the ‘jazzster’ and ‘rokstar’ suggest in their very names the music for which they are intended. the rock ‘caster’ (named after the fender ‘stratocaster’) or ‘testar’ (‘telecaster’) electric guitars join a range of bass models in the company’s offerings.

averaging 31-inches in length and three pounds, the ‘ministar’ guitars retail for around 280 to 350 USD, with the basses running 300 to 360 USD, about 41-inches long and five pounds.. optional accessories include a convertor kit that lets basses be played upright, or the ‘twinstar’ rod that connects any two compatible models to mimic a double-necked electric. 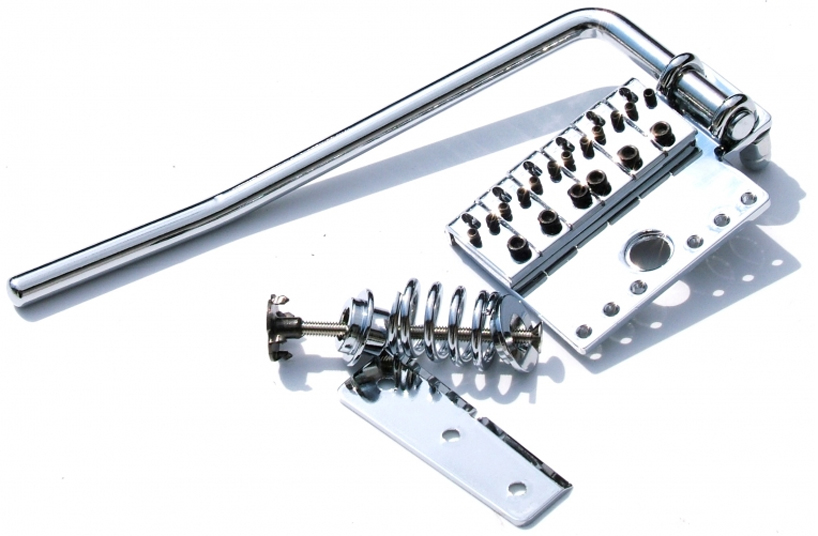 read more about bob wiley and the ‘ministars’ on gizmag