enhancing the agility and performance of flying microrobots

MIT researchers have generated a new fabrication technique to produce low-voltage, power-dense and high-endurance artificial muscle-like actuators for aerial microrobots. these muscles improve the robot’s payload extensively and allow them to hover for twenty seconds — the longest ever observed by this kind of robot. weighting less than one-fourth of a penny, its body consists of a set of four wings, each driven by a soft actuator.

as they mentioned in the video, these actuators are constructed from layers of elastomer fastened between two extremely thin electrodes and then wrapped into a squishy cylinder. the electrodes squeeze the elastomer when voltage is applied to the actuator, and a mechanical strain drives the wings to flap. the bigger the surface area the actuator has, the less voltage is demanded. therefore, the researchers have built these artificial muscles utilizing as many ultrathin layers of elastomer and electrode as they could. 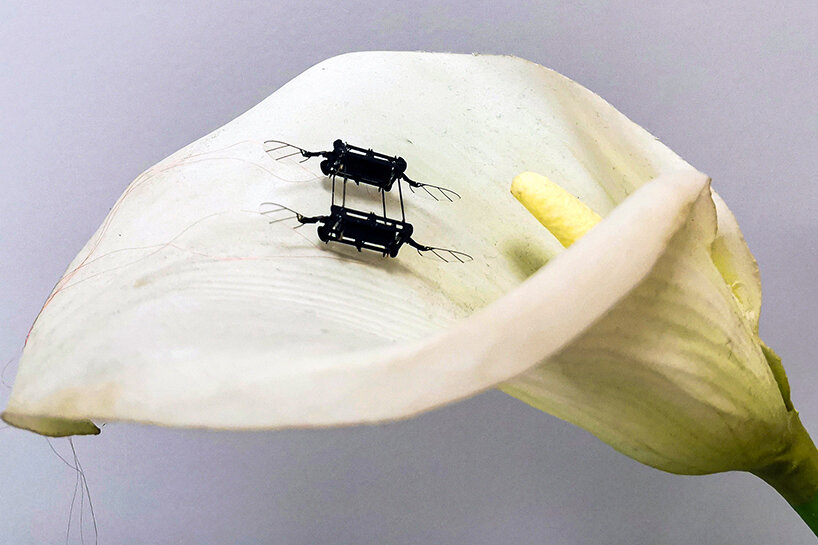 MIT researchers have pioneered a new fabrication technique that enables them to produce low-voltage, power-dense, high endurance soft actuators for an aerial microrobot

reinventing parts of the fabrication process, the MIT researchers (see more here) were able to form an actuator of 20 layers, each of which is 10 micrometers in thickness (about the diameter of a red blood cell). they had to overcome a major issue caused by the spin coating process: during spin coating (an elastomer is poured onto a flat surface and rapidly rotated), tiny air bubbles appeared in the elastomer as the thickness decreased. the solution to this, was an additional vacuuming process immediately after the coating, while the elastomer was still wet.

the MIT team has developed a fabrication technique that enables them to build soft actuators that operate with 75 percent lower voltage than previous versions while carrying 80 percent more payload. this new fabrication technique produces artificial muscles with fewer defects, increasing the power output — and thus the robot’s payload — of the actuator by more than 300 percent and significantly improving its lifespan.

‘this opens up a lot of opportunity in the future for us to transition to putting power electronics on the microrobot. people tend to think that soft robots are not as capable as rigid robots. we demonstrate that this robot, weighing less than a gram, flies for the longest time with the smallest error during a hovering flight. the take-home message is that soft robots can exceed the performance of rigid robots,’ stated kevin chen, who is the d. reid weedon, jr. ’41 assistant professor in the department of electrical engineering and computer science, the head of the soft and micro-robotics laboratory in the research laboratory of electronics (RLE), and the senior author of the paper. 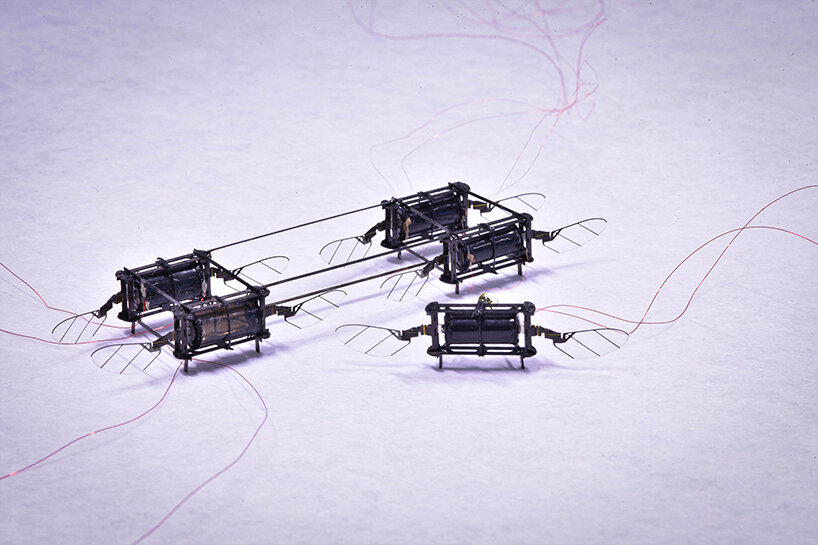 another difficulty they had to deal with was that as more layers were added, the actuator took longer and longer to dry. ‘the first time I asked my student to make a multilayer actuator, once he got to 12 layers, he had to wait two days for it to cure. that is totally not sustainable, especially if you want to scale up to more layers,’ chen said. they discovered that baking each layer for a few minutes immediately after the carbon nanotubes are transferred to the elastomer shortens the curing time as more layers are added. during liftoff experiments, the 20-layer actuator, which requires less than 500 volts to operate, exerted enough power to give the robot a lift-to-weight ratio of 3.7 to 1, so it could carry items that are nearly three times its weight. the 20-layer actuator was still working smoothly after being driven for more than 2 million cycles, far outpacing the lifespan of other actuators. 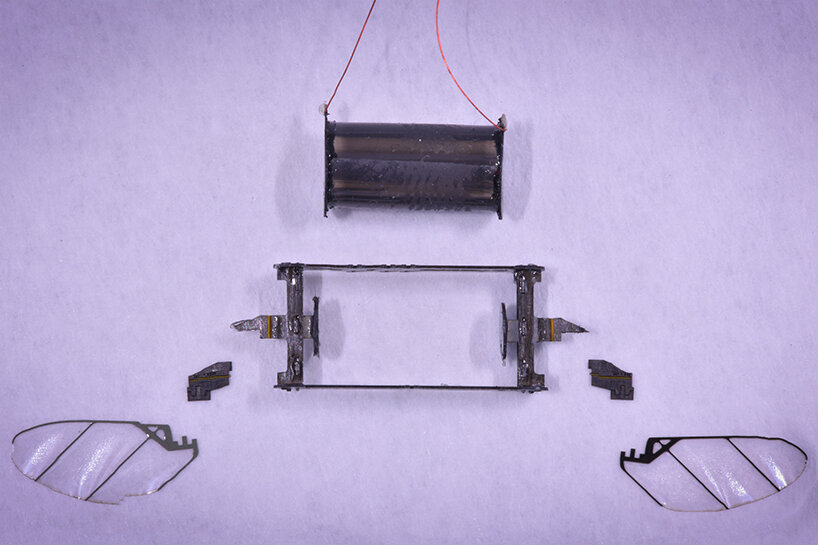 the rectangular microrobot, which weighs less than one-fourth of a penny, has four sets of wings that are each driven by a soft actuator

‘two years ago, we created the most power-dense actuator and it could barely fly. we started to wonder, can soft robots ever compete with rigid robots? we observed one defect after another, so we kept working and we solved one fabrication problem after another, and now the soft actuator’s performance is catching up. they are even a little bit better than the state-of-the-art rigid ones. and there are still a number of fabrication processes in material science that we don’t understand. so, i am very excited to continue to reduce actuation voltage,’  he mentioned.

the next step for the project is to build actuators in a cleanroom at MIT. producing in a cleanroom will eliminate issues caused by dust and air pollution and allow them to use methods that are more precise than spin coating. chen’s hope is to reduce the thickness to only 1 micrometer, which would open the door to many applications for these insect-sized robots. 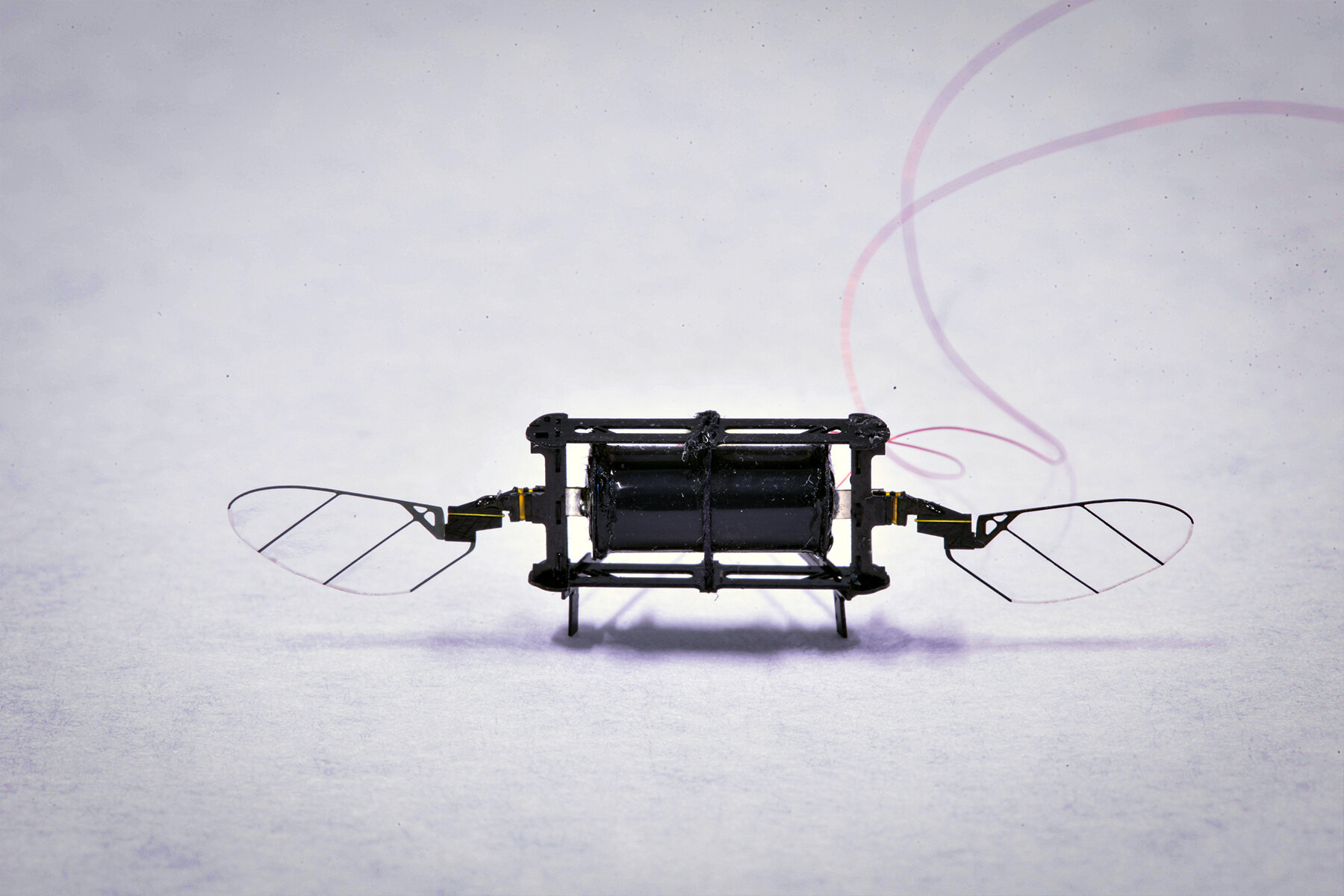 ‘we demonstrate that this robot, weighing less than a gram, flies for the longest time with the smallest error during a hovering flight,’ says kevin chen.