as a continuation of the polish workshop’s obsession to create the perfect motorcycle but in a different way, moose moto customizes a second pair of yamaha XV920 following their pursuit for ‘good and evil’ in 2019. it is another declaration of love to the original bike’s muscular box-frame and exposed V-twin engine, this time using two produced in 1983. the result, called ‘the other worlds’, distinguishes two aggressive-stance ‘drag’ cafe racers – one in gold and one in silver. 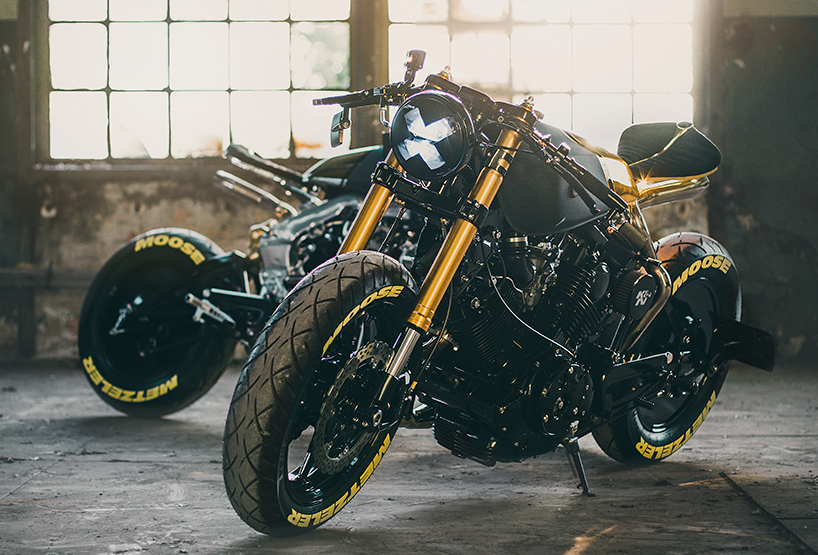 all images by marcin bukowski

moose moto’s yamaha XV920 motorcycles are defined by full ‘drag’ rear wheels and sculptural exhausts. made from high quality, polished stainless steel pipes, the exhausts flow through the right side to the left but beneath the machines to appear from underneath the seats. their forked ends perfectly reflect the power of the bike’s V-twin engine. to complement this characteristic, all unnecessary structural parts were shaved off and pre-designed frames and tanks were used to carefully hide wires from view. 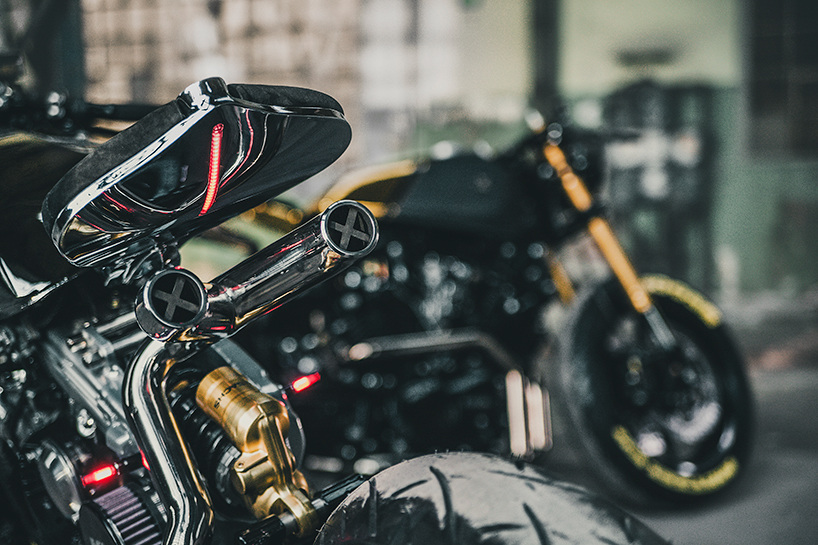 the clean, discrete frames are coated in a silver chrome paint. the tanks, whereas, were first covered with a galvanic chrome and gold chrome paint, then a carbon hydro-graphic was applied to the front and protected in a matt clear varnish, before lastly being finished with carbon gloss pinstripes. the results are clean yet mesmerizingly eye-catching. 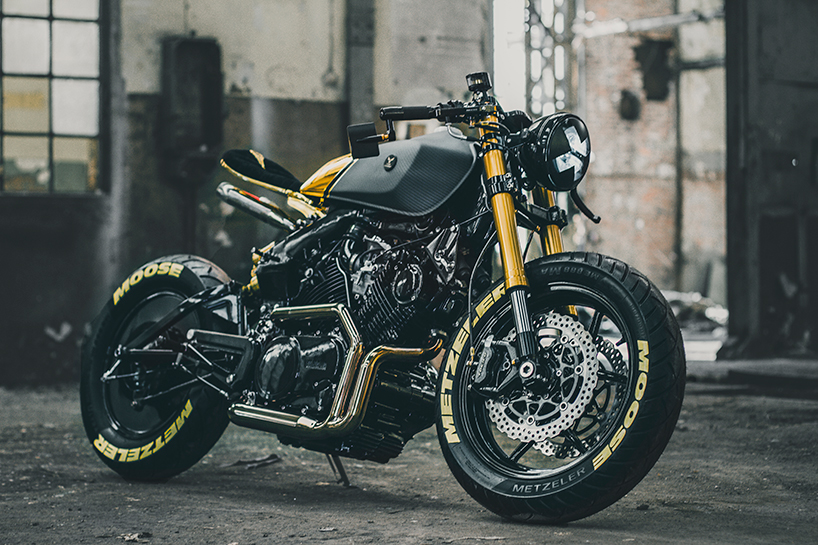 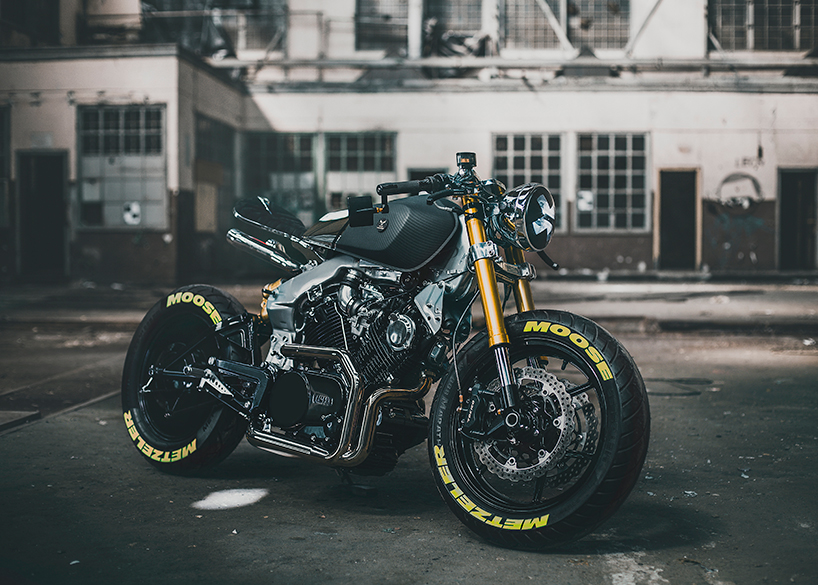 as a feature seemingly as sculpted as the exhaust pipes, the motorcycles’ tail saddles were redesigned. they follow the same line as the raised tanks to create a dynamic, slightly aggressive body impression. made entirely from cut and bent uniform steel, the saddles are fitted with high quality suede leather and a real carbon fiber logo. holes are milled and then fed with LED lights so that the taillights beam in sci-fi-like lines from under the seats. 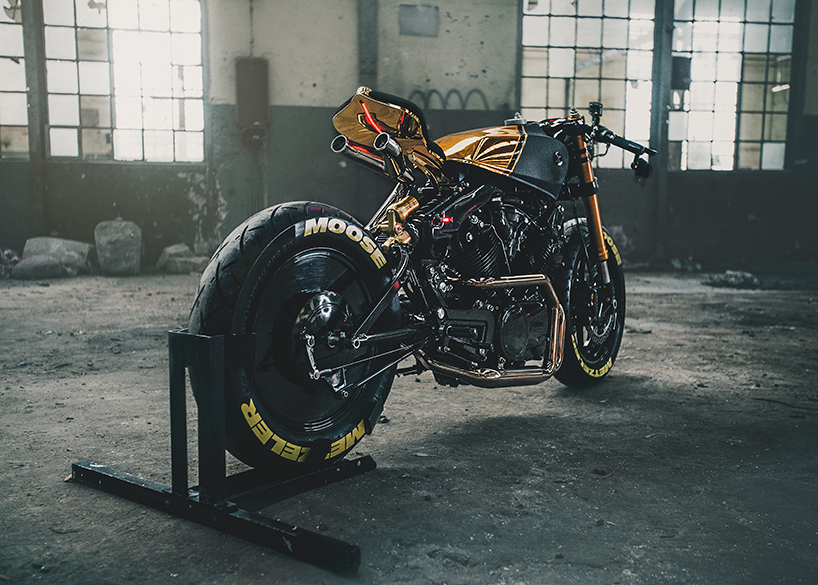 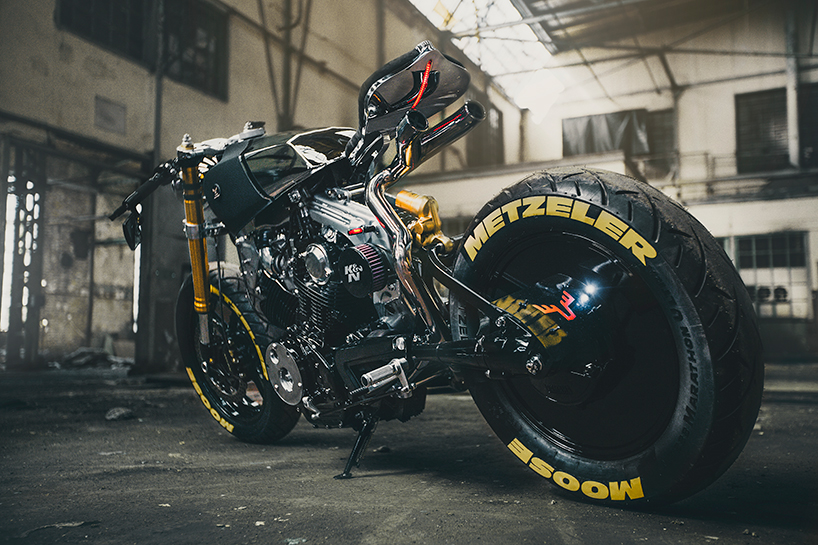 at the front, the bikes feature headlamp LEDS with a racing-style cross labelled across the glass. kawaski zx6r front suspension – the rear suspension is made from dismantled mv agusta sachs rear shocks – extend towards an upper triple modified and integrated with specially designed casings for the motogradget digital dash. here, the bars are equipped with minimalist switches. the two motorcycles ride upon fat metzeler tires with yellow racing letters. 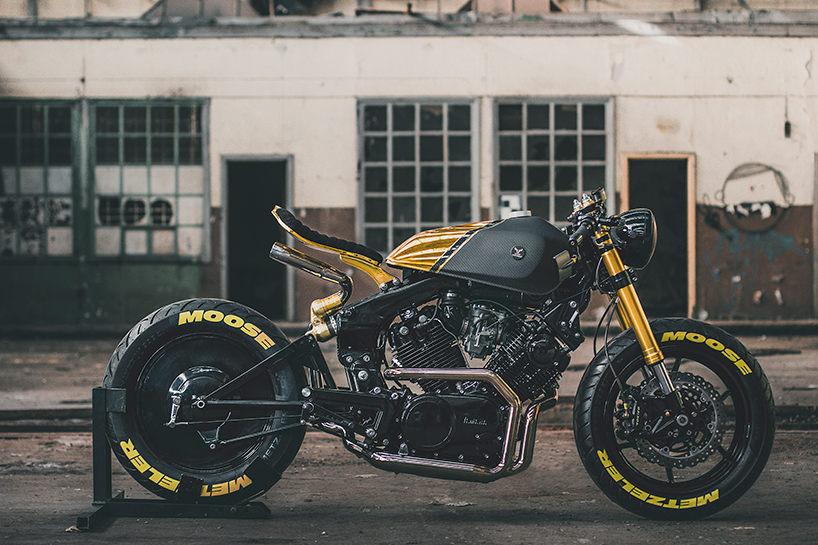 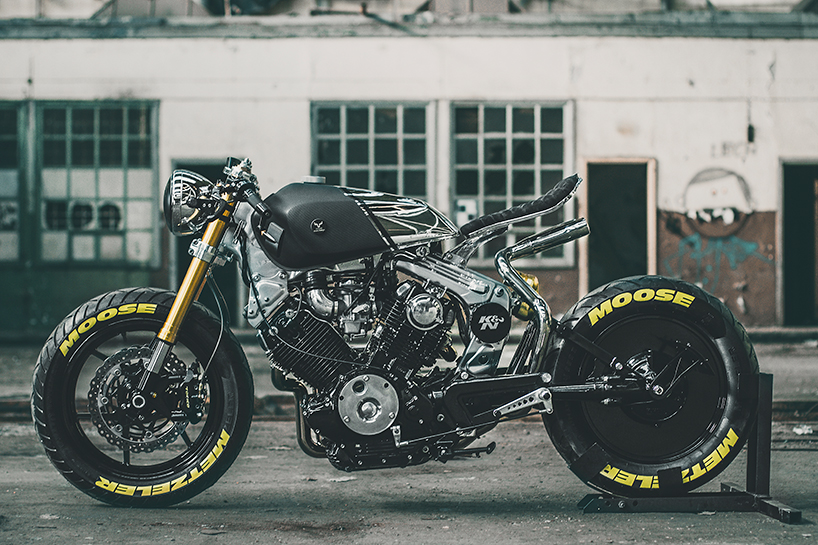 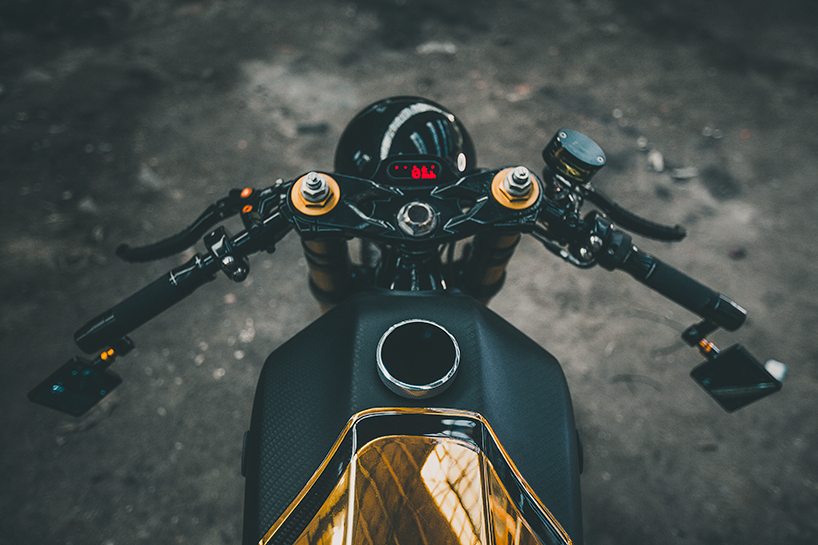 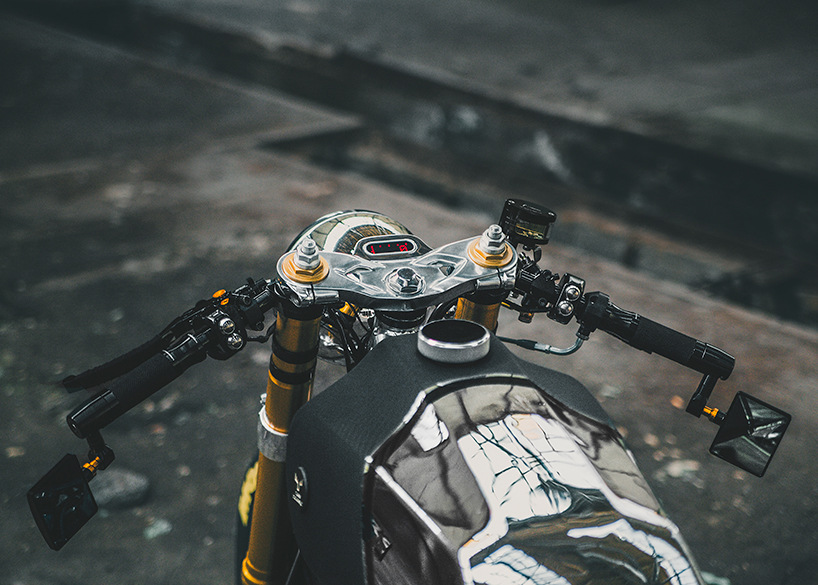 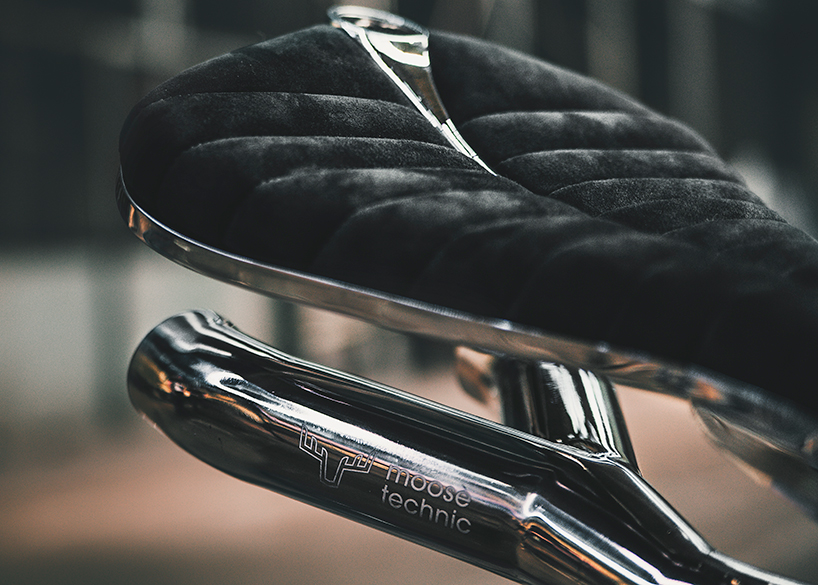 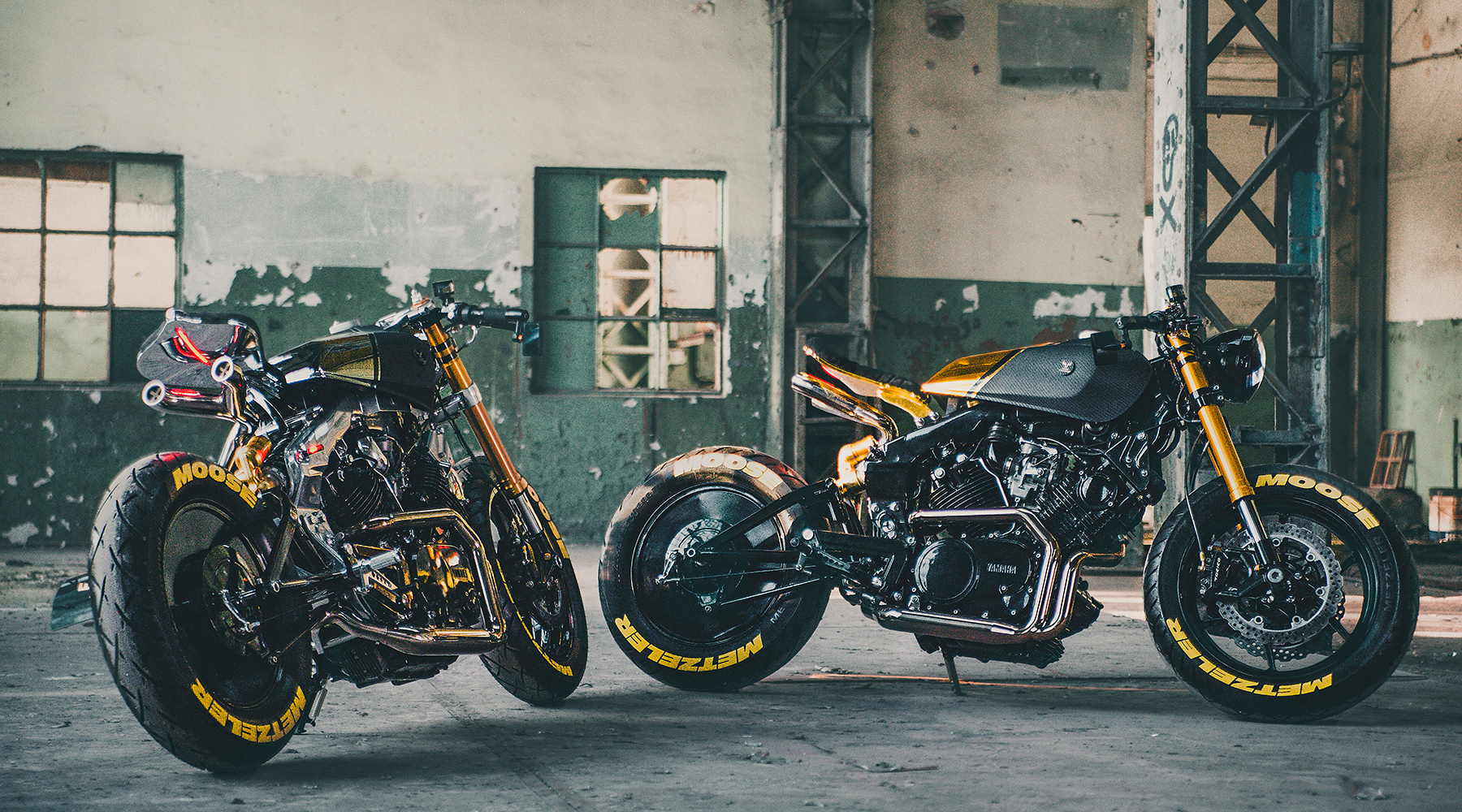 project name: the other worlds