NASA has announced plans to test its updated solar sail technology in 2022. known as ACS3 (advanced composite solar sail system), the aim of the mission is to replace conventional rocket propellants by developing and testing solar sails using sunlight beams to move nanosatellites.

‘just as a sailboat is powered by wind in a sail, solar sails employ the pressure of sunlight for propulsion, eliminating the need for conventional rocket propellant,’ NASA wrote in a june 23 statement. 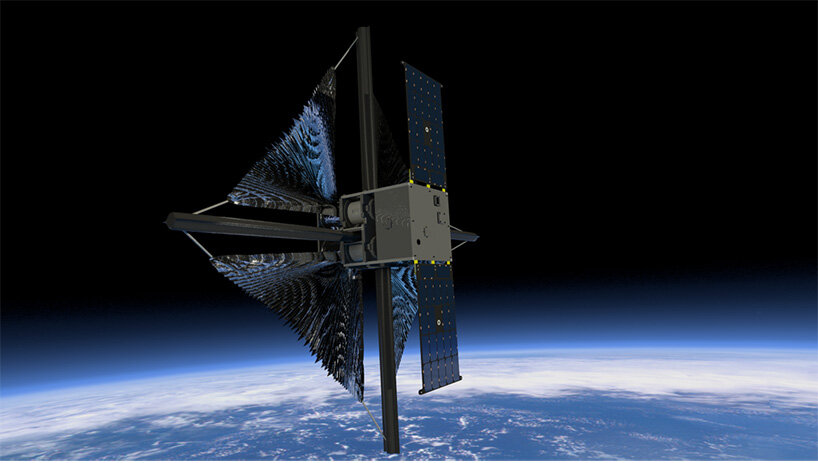 the NASA solar sail propulsion systems have been designed for future small interplanetary spacecrafts destined for low-cost deep-space and science missions requiring long-duration and low-thrust propulsion. the benefit of nanosatellites with solar sails is a continuous thrust without using expending propellants, enabling orbits that are not possible with conventional propulsion systems.

‘the primary objective of the ACS3 mission is to demonstrate the successful deployment of the composite boom solar sail in low-earth orbit,’ said NASA. ‘after reaching space, the mission’s CubeSat spacecraft will deploy its solar power arrays and then begin unfurling its solar sail via four booms that span the diagonals of the square and unspool to reach 7 meters (about 23 feet) in length. after approximately 20 or 30 minutes when the solar sail is fully deployed, the square-shaped solar sail measures approximately 9 meters (about 30 feet) per side or about the size of a small apartment. a suite of onboard digital cameras will obtain images of the sail during and after deployment in order to assess its shape and alignment.’

interest in solar sailing as an alternative to chemical and electric propulsion systems continues to increase. using sunlight to propel small spacecraft in lieu of consumable propellants will be advantageous for many mission profiles and offers flexibility in spacecraft design to help NASA meet its missions’ objectives most efficiently.