american rapid prototyping development team made in space has collaborated with NASA to design a 3D printer capable of performing in zero gravity conditions. the printer is currently being used for testing purposes as NASA investigates how additive manufacturing processes could be used for the next generation of melt deposition modeling, as well as for any future 3D printing technologies such as metals or electronics in-space manufacturing on both the ISS and deep space missions.

if successful, this project will provide a detailed analysis of how ABS thermoplastic resin behaves in microgravity, a gateway for fabricating parts on-demand in space, which would ultimately reduce the need for bringing spare components on future missions. it is expected that additive manufacturing technology will quickly become a critical part of any mission’s infrastructure, such as the application of 3D printed food. ‘this developmental testing was vital to the design of our flight unit printer. we’ve engaged in a fast-paced mission starting in early 2013 to produce hardware that nasa would qualify for launch and installation to the ISS in 2014. the fact that we’ve been able to pass another milestone in an abbreviated time frame is extremely exciting,’ said michael snyder, made in space’s director of R&D. 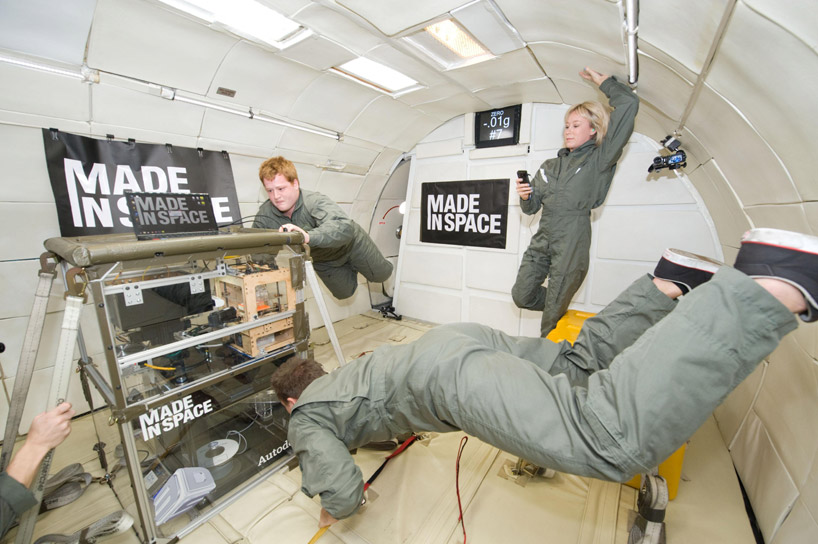 monitoring each of the 3D printers aboard a modified boeing 727 as the simulated gravity environment reaches -.01g
image © made in space, inc