ideal for environments requiring safe and environment-friendly transportation solution, ‘navia’, the eight passenger robotic driverless electric vehicle has been designed by induct technologies to complement conventional transport (public or private) by taking care of the dreaded ‘last mile’ in daily commutes. capable of navigating through pedestrianized city centers, large industrial sites, airports, theme parks, university campuses or hospital complexes on its own, ‘navia’ travels at a maximum speed of 20 km/h (12.5 mph) carrying people independently thanks to its on-board lasers and sensors.

as part of a two-year collaboration between nanyang technological university and JTC corporation’s cleantech park in singapore, ‘navia’ will be tested along a pre-determined two kilometer route, where induct will improve and enhance electric vehicle battery reliability and charging speeds, as well as overall vehicle efficiency.

using sensory technology, the autonomous form of transportation can locate itself within its surroundings, detect and avoid obstacles in its path or even map out a route for passengers on-board. a touchscreen within the interior offers various stops and end points – users just select their destination on the screen, and the shuttle automatically follows the desired route. once there, the doors open to let passengers get on and off.  ‘public transport is not enough on its own. we have to think of ways of getting around that are accessible and near at hand.’ says pierre lefèvre, CEO of induct. ‘the aim is to improve mobility by thinking beyond traditional layouts and the private car,’ he adds. ‘being electric, the navia is silent; it recharges itself unaided at a docking station, and needs no special infrastructure such as rails, so it can work on any kind of site.’ 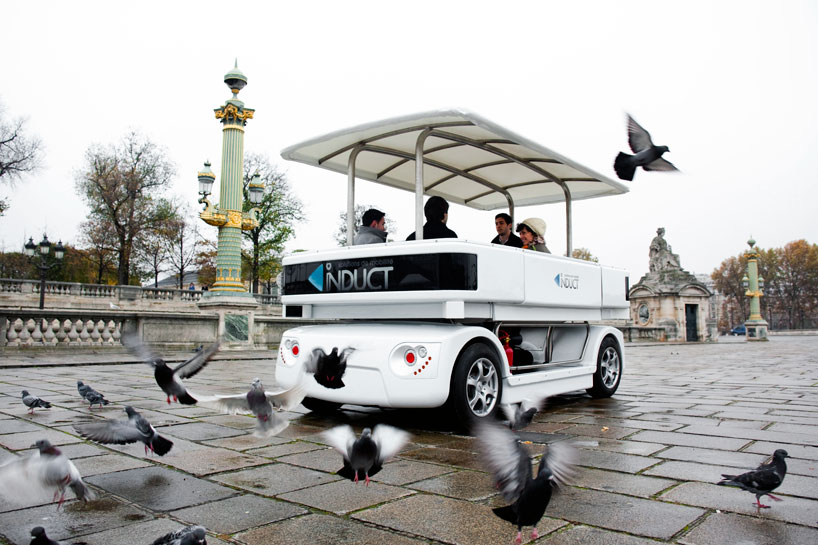 navia’s system provides a flexible mode of transport that can be tailored to the layout of any site. the vehicle can be used like a bus, with predefined stops and a strict timetable; or it can provide on- call transport where it is summoned from a terminal, a smartphone or online. in this mode all the passenger needs to do is get on board and enter a destination at the control screen. the vehicle can be used like a bus, with predefined stops and a strict timetable

GPS and sensors that detect the vehicle’s acceleration (accelerometers) and its rotation (gyroscopes) around all three axis, enabling it to instantly calculate its position, route and distance traveled since the last known position. 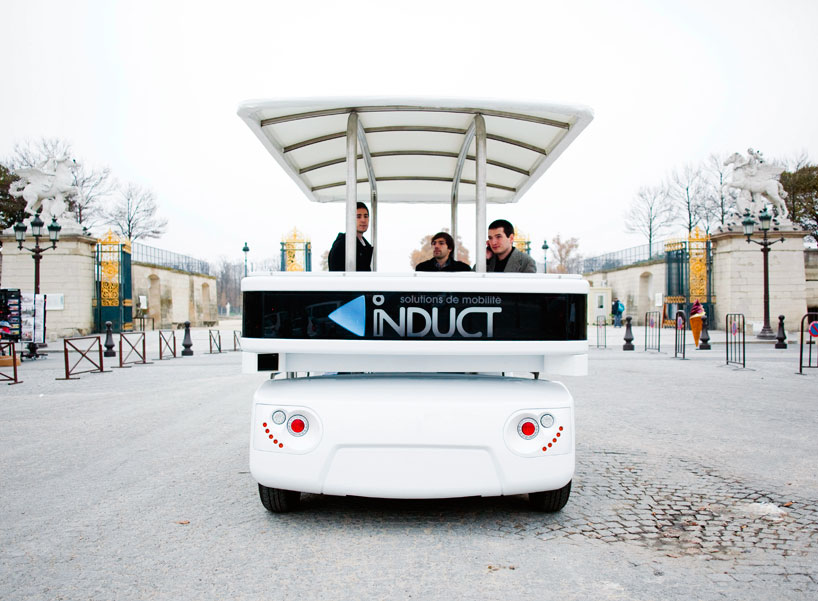 four laser-based light detection and ranging units with a 200 yard range sweep the area ahead and provide a precise reading of the space around it, accurate to one centimeter. from the data the system generates, a map of the immediate surroundings is created which it uses to steer the vehicle’s course. obstacles are detected by combining the LIDAR information with a system of optical cameras that give stereo vision in the same way as a person’s two eyes. 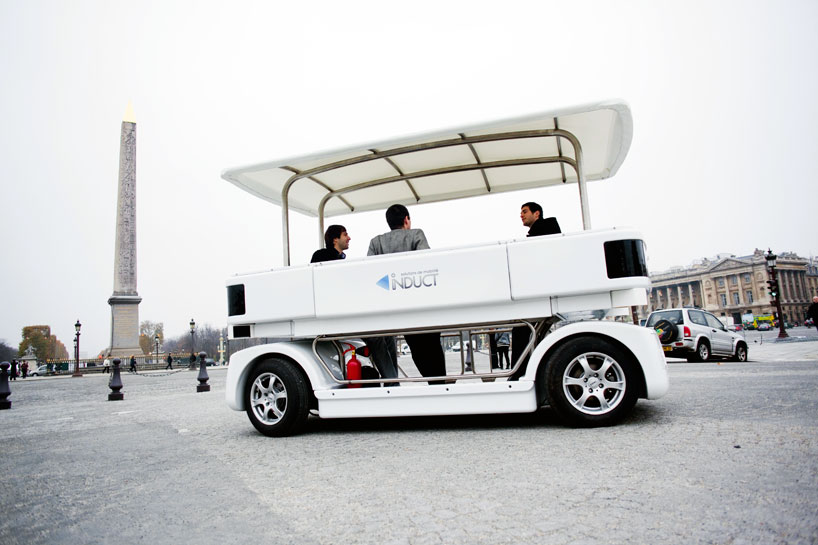 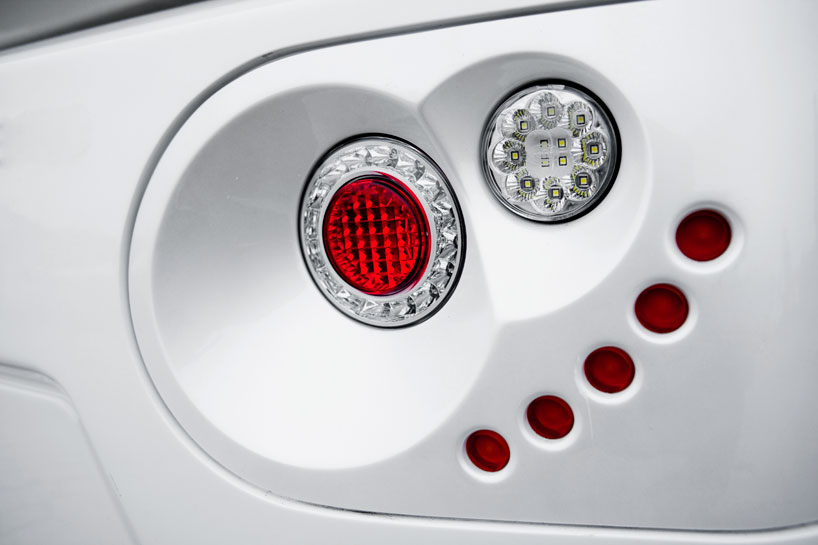 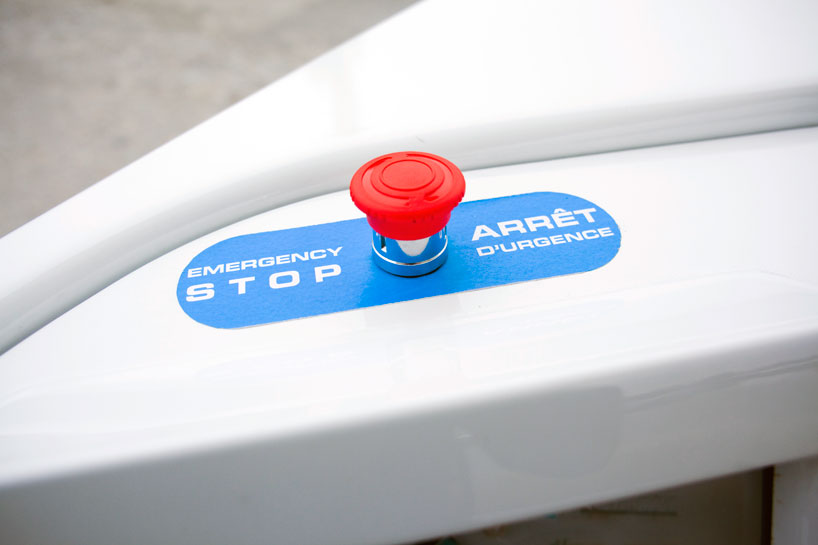 the navia comes equipped with an emergency stop 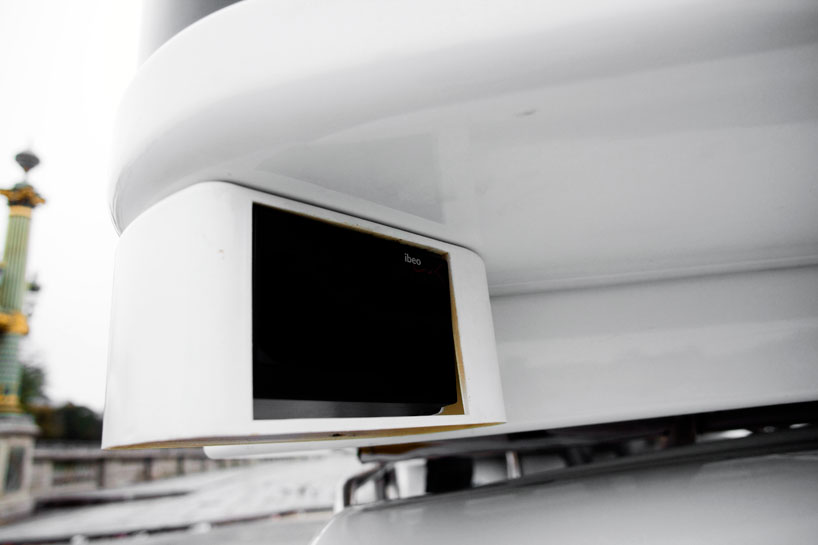 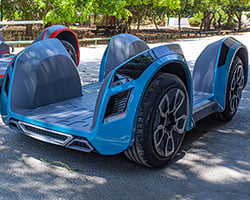 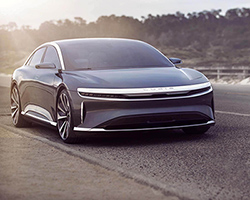 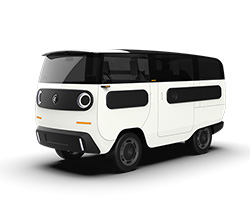 Jul 28, 2020
eBussy is an electric modular EV that can turn into at least 10 different vehicles

Sep 08, 2020
virgil abloh and mercedes-benz remix the G-class as a race car for project geländewagen
the design lays its construction methods bare, and celebrates the handcrafted imperfections that make it unique.
technology
0 shares
connections: +1500