the nissan ‘kicks’ concept is unveiled at the 2014 sao paulo international motor show and marks the company’s second ever brazilian design exploration. it follows the 2012 showing of the ‘EXTREM’ concept by reflecting both the vibrancy and seriousness of the country in its modern styling. with bold, distinctive color treatments, a dramatic stance and an attention to detail, the car hints at a possible production model for the fast-growing market in the south american nation. the event runs from october 30th to novemeber 9th, with the ‘kicks’ vehicle being showcased throughout.

the nissan kicks concept reflects the country of brazil

‘the new nissan kicks concept takes the nissan EXTREM from pure fantasy to a market position that is a little closer to reality – and possibly toward a future production vehicle,’ said nissan brazil president françois dossa. ‘while the exaggerated form of EXTREM, as the name suggests, was all about fun, the kicks concept adds elements of robustness and security that are highly appropriate for today’s fast-moving brazilian professionals.’ 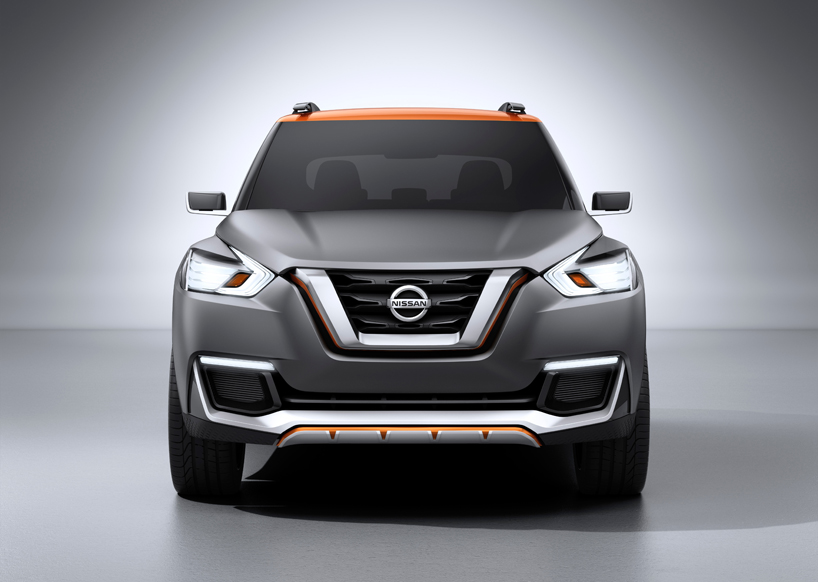 the front view of the concept car

the project was led by their global design center in japan and was conceived in a worldwide collaboration between california-based nissan design america and nissan design america rio. the studios sought out the perfect balance between a traditional compact SUV and a performance car by creating a rock solid foundation that has a highly grounded yet ready to pounce form. its new proportions of a high beltline, cowl, full wraparound glass and pushed out 19-inch six-spoke aluminum -alloy wheels add a sense of security as well as robustness. a dynamic personality is also reflected because of how the sculptural upper body interplays with the lower section’s blunt vertical front end and powerful rear. 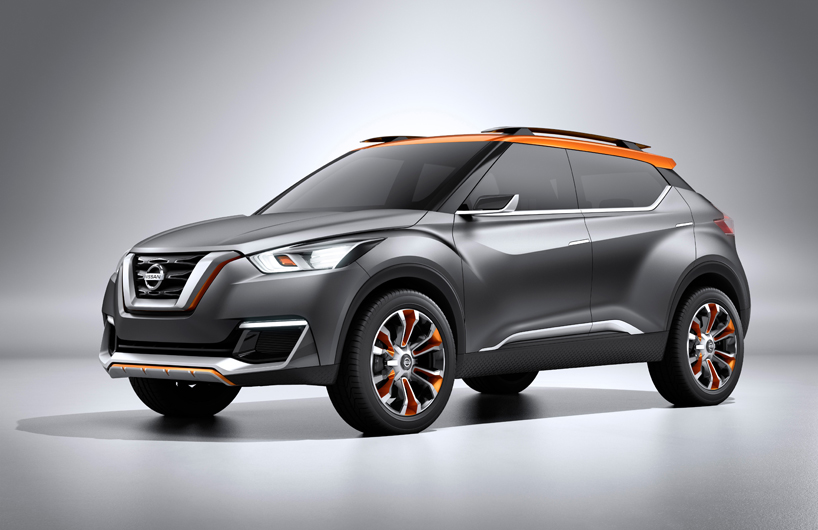 ‘the kicks project has been an outstanding example of how our global design network works to create vehicles that are well suited to the regions where they will be seen and enjoyed. for this concept car, we called on our rio de janeiro team for their expertise and local insight,’ said shiro nakamura, senior vice president and chief creative officer, nissan motor co., ltd. ‘this type of collaboration between different studios has long been a strength of nissan and is a key to our design leadership.’

‘while the kicks concept borrows some design influences from EXTREM, we wanted to explore a fresh, unexpected perspective on the future of the urban crossover segment in brazil.’ he added, ‘kicks is intended to be a little more mature and thoughtful than EXTREM. it is fun-to-drive, but also a serious vehicle. it’s designed to be a vehicle that has an eye-catching presence, a vehicle that owners would be proud to own and drive.’ 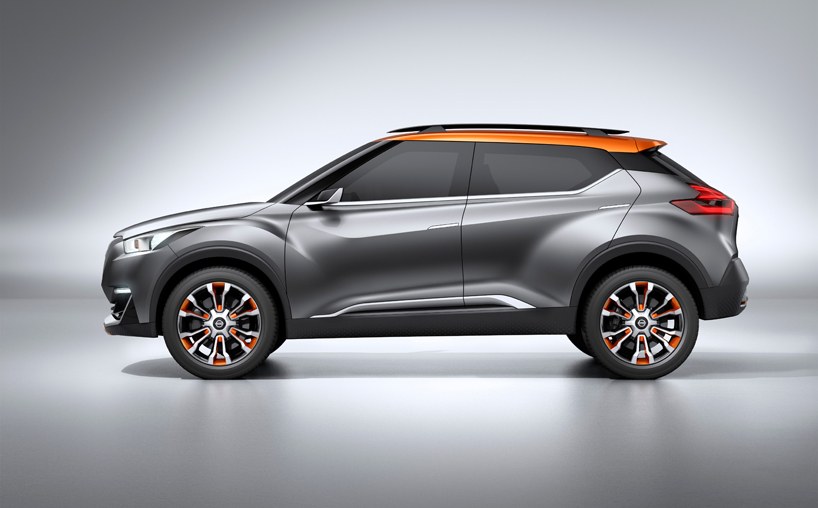 the kicks’ side view

the nissan ‘kicks’ concept stays true to the company’s brand identify by incorporating signature elements such as the V-motion grille, boomerant lights, energetic surfacing and the recent floating roof – that lightens up the cabin. the automobile’s name intends to express its combination of agility, athletic attitude, youthfulness and its tough demeanor.

speaking about the choices of color for kicks, NDA-rio chief designer robert bauer said, ‘gray is an extremely popular color in brazil, reflecting the seriousness and sophistication of the urban community. so the kicks concept features a superfine finish we call liquid satin titanium’. he continued, ‘but we also wanted the vehicle to express the pop and drama that makes life special, so we brushed the kicks concept with bold strokes of rich, deep rio sunset orange on the roof, wheels and other accent areas.’ 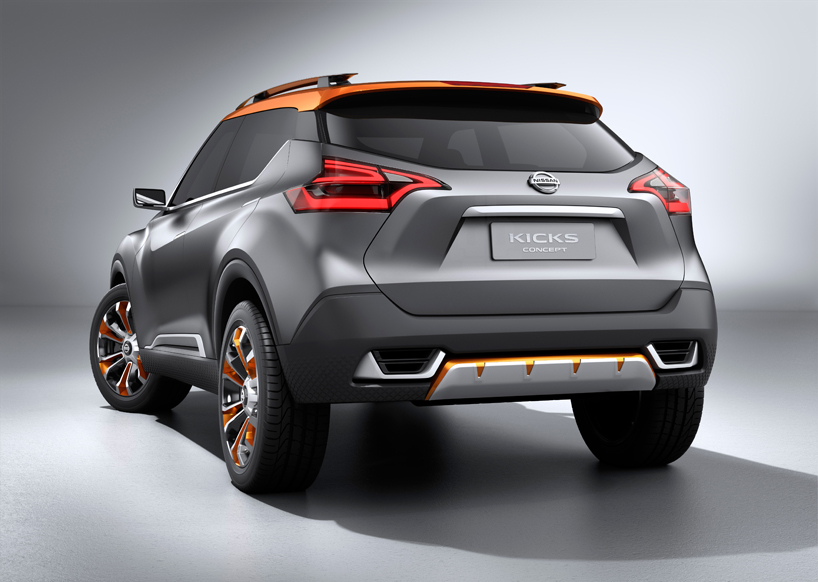 ‘brazil has a mix of people and cultures that blends a range of styles, flavors and tastes,’ explains nissan’s executive design director, mamoru aoki. ‘in developing the kicks concept, we sought to create a design that is both aspirational yet attainable – a vehicle that is rugged enough to handle the reality of brazilian back roads but that is sporty, sophisticated and business-like with year-round utility.’

‘where the stance of the nissan frontier pickup might be compared to a power lifter and the nissan GT-R to a world-class sprinter, the kicks concept is more like a brazilian jiu-jitsu fighter – coiled for action and precise in every movement,’ explained Aoki. 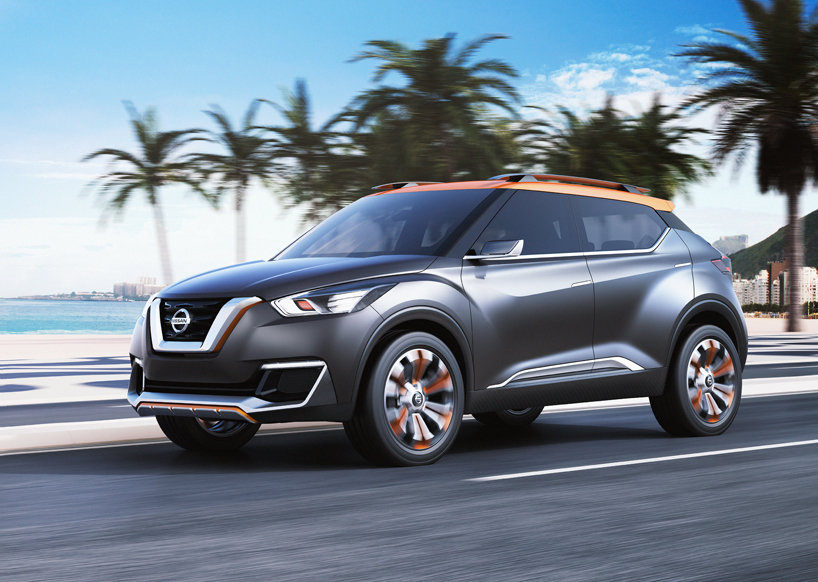 from all angles, the car looks highly grounded yet ready to pounce 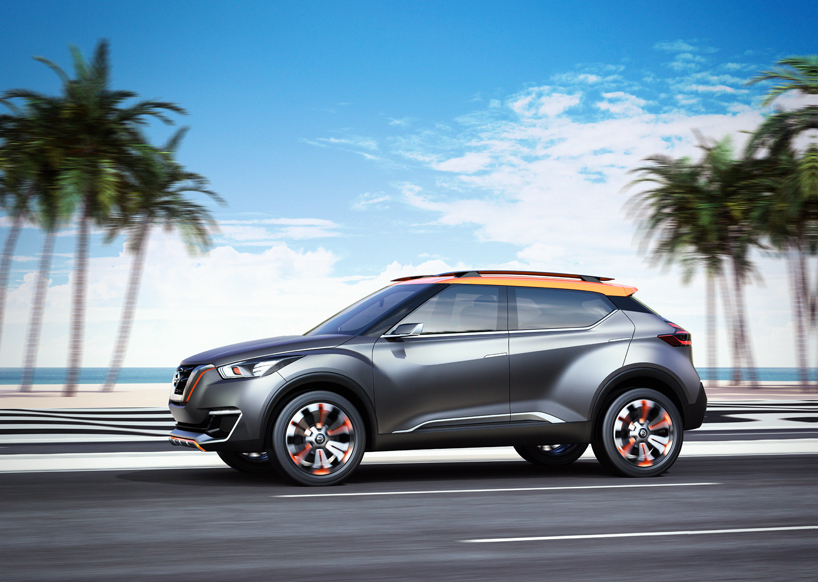 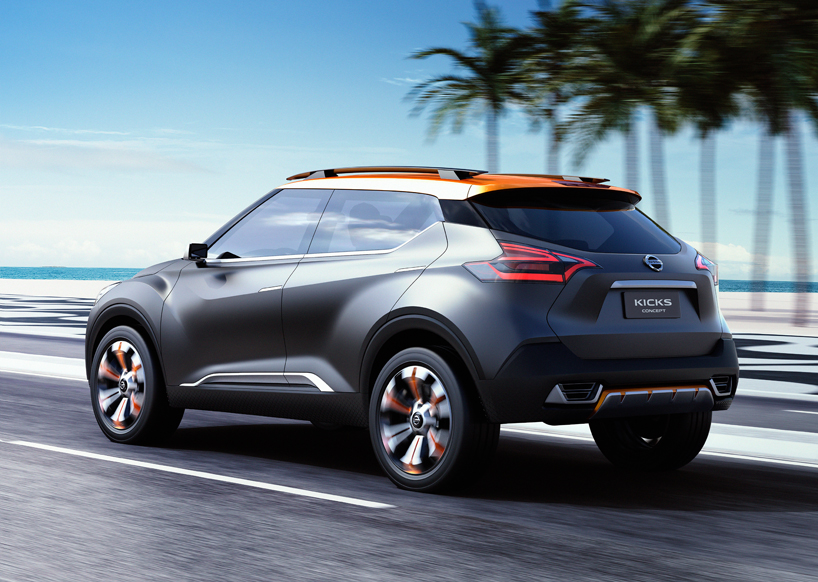