for the 2017 tallinn architecture biennale, noumena has presented its installation based on the future of robots and its adaptability with the environment. deep learning has paved the way for machines to expand beyond narrow capabilities to soon achieving human-level performance on intellectual tasks. however, as artificial intelligence — A.I. — establishes its place within humans, society will need to develop a framework for both to thrive. a new form of artificial life will emerge, finding space at the peripheries of humanity in order to not compete for human-dominated resources. A.I. will attempt to improve its operating surroundings to not just survive but be self-sustaining, forming the basis of a civilization constrained at the intersection of nature and technology. 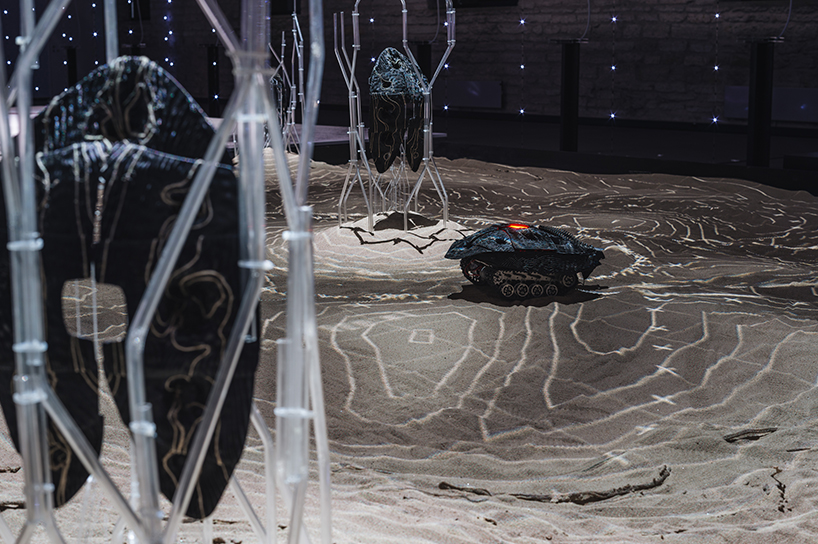 barcelonian based practice noumena has developed a framework to build this narrative based on the cross disciplinary intersection of computational design, mechanical and electronic design, rapid prototyping interaction and mapping. nowadays, computing tools as well as rapid prototyping machines allow to have a quick practical feedback on design solutions and to iterate experimenting different possibility at the same time giving the chance to choose and custom a functional part. 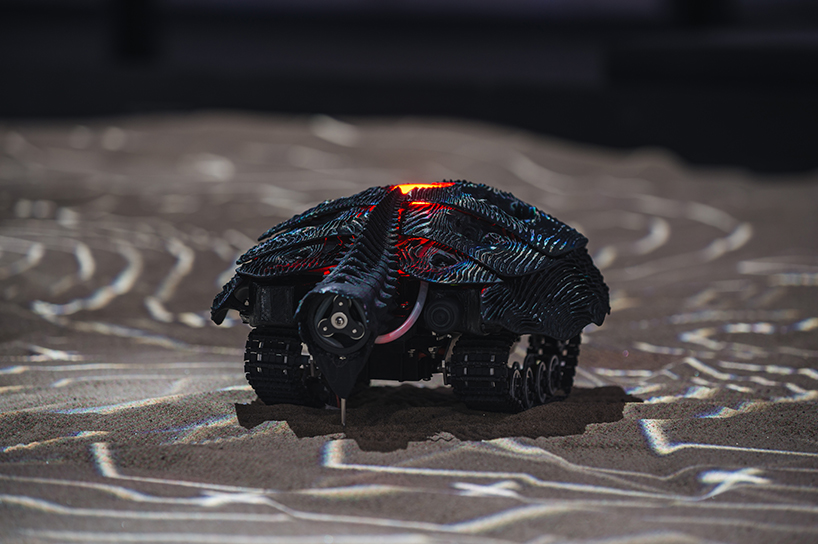 ecology has been one of the topics that has driven the design decisions of the project. noumena’s proposed robots seek nature as the main inspiration and the decisions try to adapt and integrate form and function. technical requirements have been embedded into the design process that mostly expresses itself in the carapace skin that works as multi-functional layer — it protects internally the electronics and, from the outside, it performs as the substrate for bacterial growth guiding its proliferation through nervatures that characterize the surface displacement. 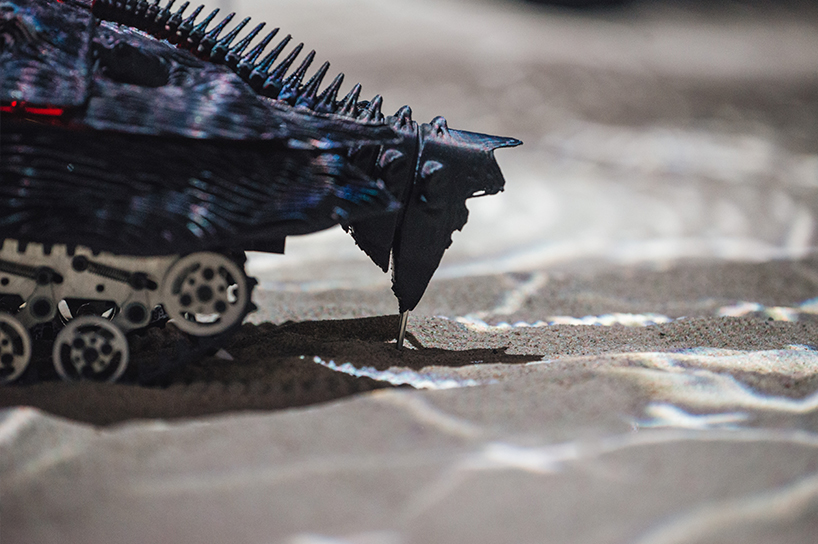 the robots’ skin is assembled with multiple 3D printed shells, that are connected to the main frame of the robots, where all the electronics and motors are placed. the main board is an arduino which is controlling the two DC motors moving the crawlers. each instruction for the movement is transmitted through a kinect motion sense input device. the red light placed on the robots is read by the kinect and sends back to a processing script that through computer vision detects the actual position of the rover and communicates future instructions back to it.

all projections are produced in max MSP, animating a transforming landscape which is built over the different columns hosting the new generation of robots. reaching the back part of the rover, the carapace opens, revealing the spinal column that hosts in his terminal part the injection system used to release material in the landscape. this tool consists of a peristaltic pump built and adapted to easily integrate into the last spine. 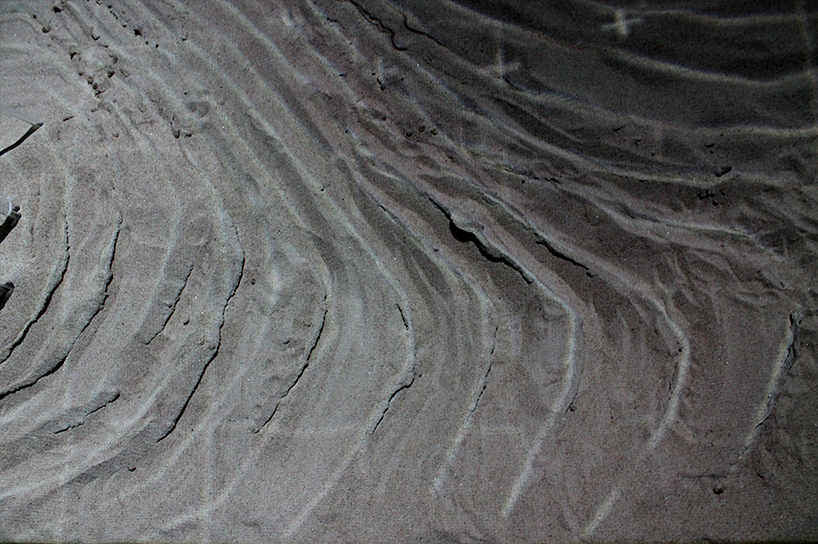 each robot is finally depositing through a syringe a mixture of aggregating material and mycelium through a peristaltic system placed along the vertebral column of the rover integrated into the last spine. as a result of this operation the sand aggregates around the mixture, generating a non-uniform network of lines and bacterias, shaping a new articulated landscape robotically manipulated. overlap of multiple traces deposited into time and spread into space allow the emergence of a complex ecosystem hidden into the ground. a robotic habitat is just growing. 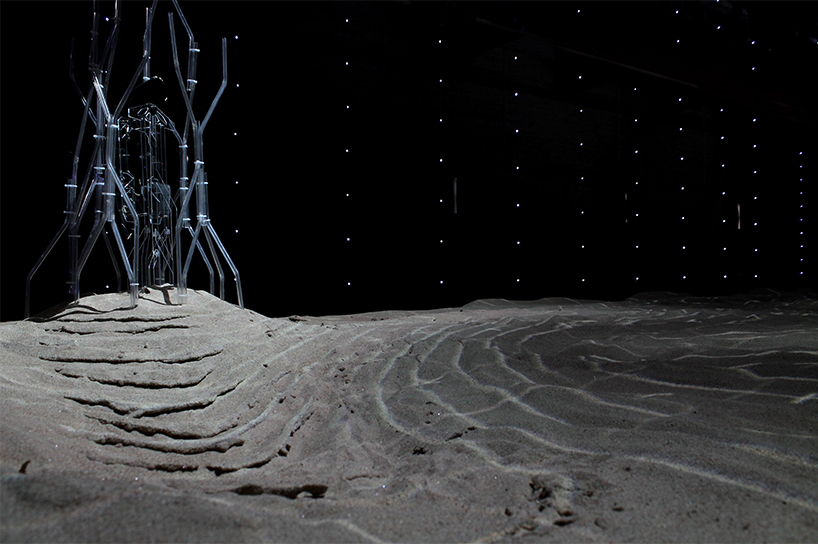 noumena’s whole installation is organized around a frame of 5 x 5 m completely filled of sand over which the robots are performing all interactive and additive fabrication performances. as a fixed installation there are also 3 columns collecting the nutrients deposited by the moving robots. those columns are incubating the new robots, shaped to mold endless shells of bacterias skins that will be covering the next generation, organically evolving into an autonomous and self-sufficient entity, no longer simply organic and no longer simply artificial. 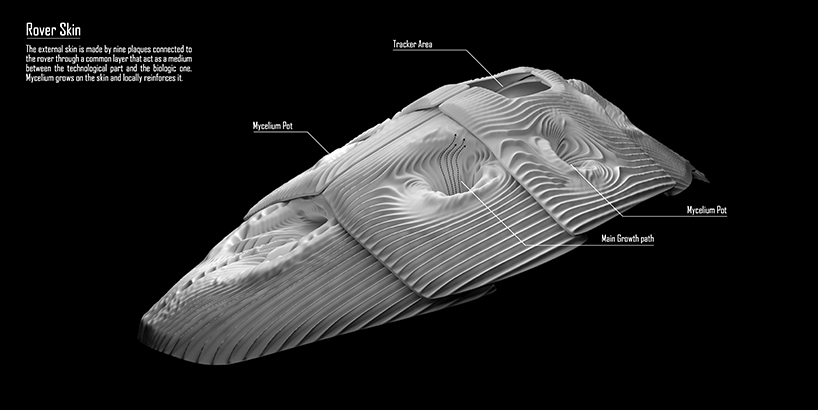 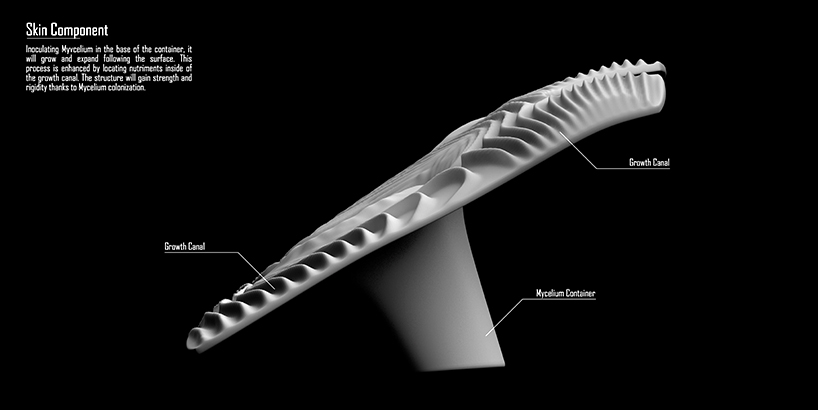 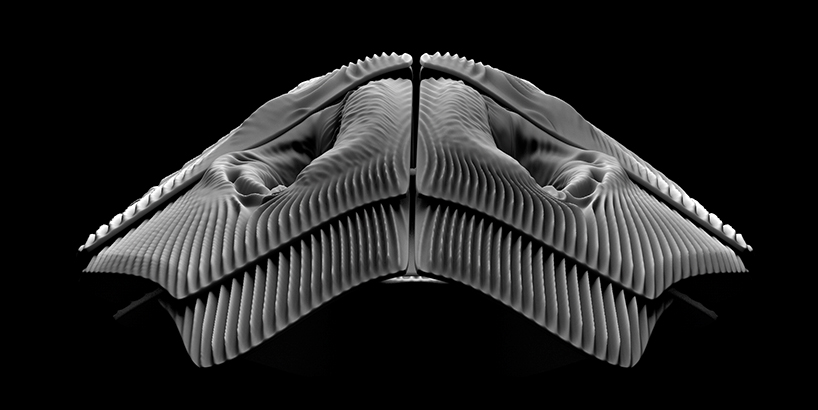 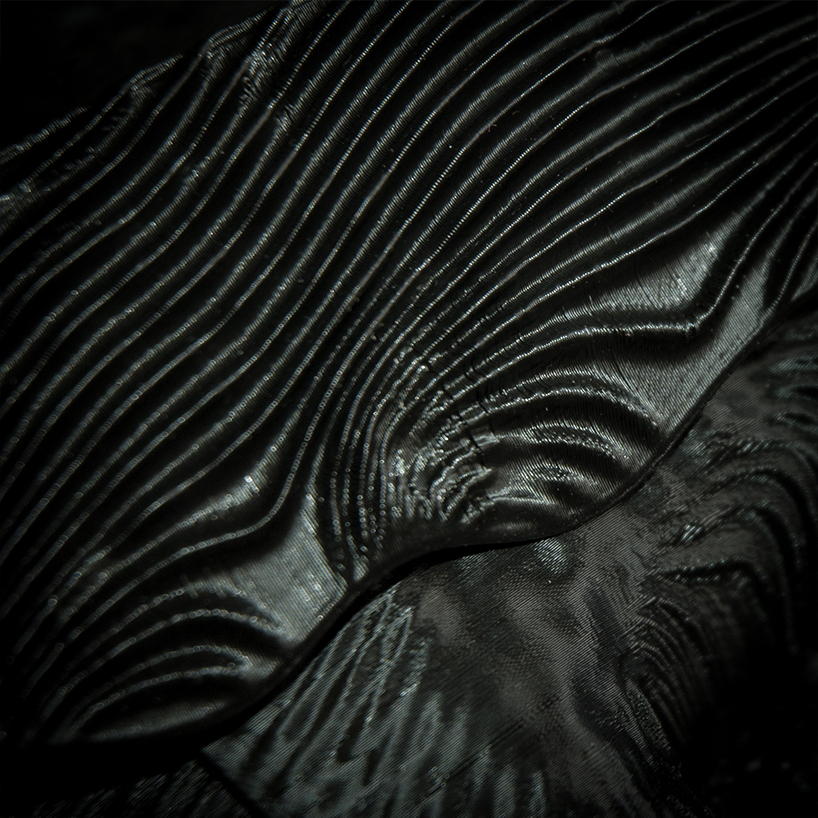 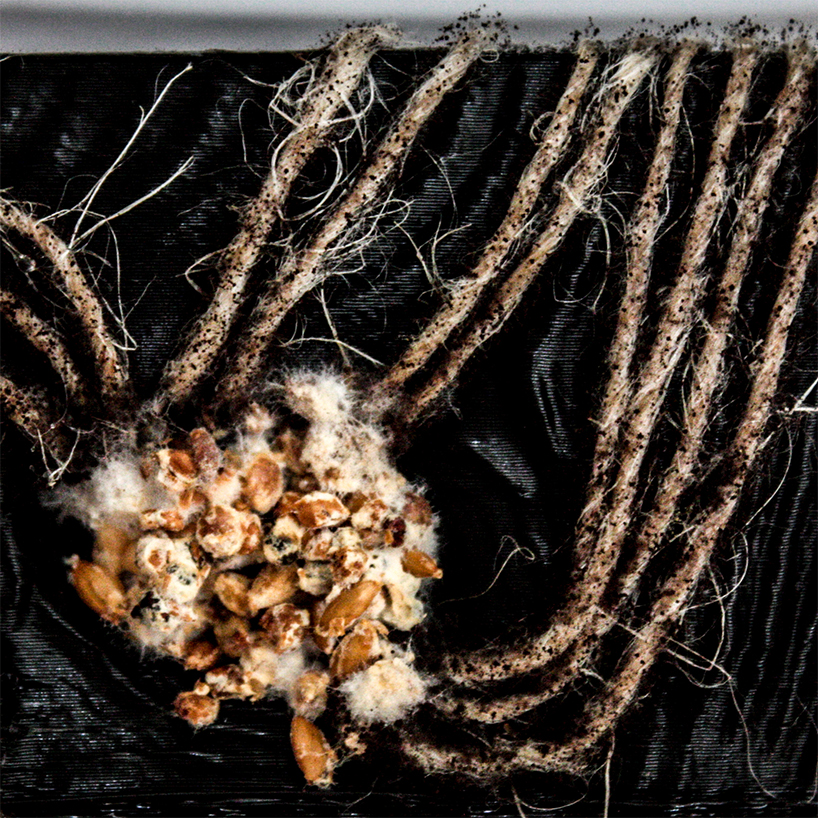