in a highly efficient effort toward the generation of renewable energy, solar panels are being suspended overhead man-made irrigation canals. first seen in the indian state of gujarat in 2014, this strategy has been found to reduce evaporation by providing shade from the sun’s heat. importantly, these bodies of water are man-made and therefore do not host wildlife. by situating the panels here, engineers are able to keep from harming natural habitats and ecosystems that would otherwise be affected in a natural river. the running water further serves to cool the panels, preventing overheating and lending an average efficiency increase of 2-5%.

now, researchers at UC santa cruz are looking to india as precedent weighing the benefits of over-canal solar across the canals of california. while the state’s 82-mile long ‘all-american canal’ marks the largest irrigation canal in the world, california is home to 3,946 miles (6,350 kilometers) of man-made canals — not to mention its average 290 days of sunlight. after hydrologic simulations, the team predicts that implementing over-canal solar arrays could save 63.5 billion gallons of water from evaporation annually while providing approximately 13 gigawatts of renewable power for the state. this is a colossal gain considering the state’s intermittent water rations and regular droughts. 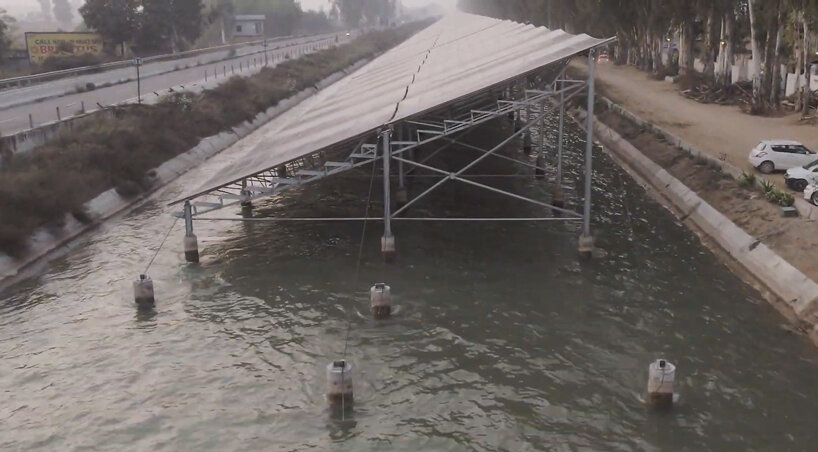 the benefits of over-canal solar panels exceeds the reduced evaporation and the inherent energy generation. the team at UC santa cruz claims that the financial benefits from shading the canals outweigh the additional costs of the cable-support structures which suspend the panels over the canals. the net value of over-canal solar photovoltaics would surpass typical overground solar by 20–50%. the addition of the shading element has even been found to reduce the growth of harmful aquatic weeds. concluding their investigation, the UCSC researchers note that the results have succeeded in ‘challenging the convention of leaving canals uncovered and calling into question our understanding of the most economic locations for solar power.’