just released for testing in spain, the robotic fish created by the shoal commission swim and communicate together to monitor aquatic pollution above: an early, carp-shaped prototype of the robotic fish

the shoal european research project has developed robotic fish that work together to monitor pollution in harbors and other aquatic areas. the bright yellow robots are undergoing their first in-vivo trials in the port of gijon, spain.

traditional methods of monitoring pollution involve the collecting of water samples by human divers– generally about once a month– which are then tested in labs onshore. by contrast, using autonomous robots, data could be collected onsite and in realtime, offering quicker response in the event of pollution problems. 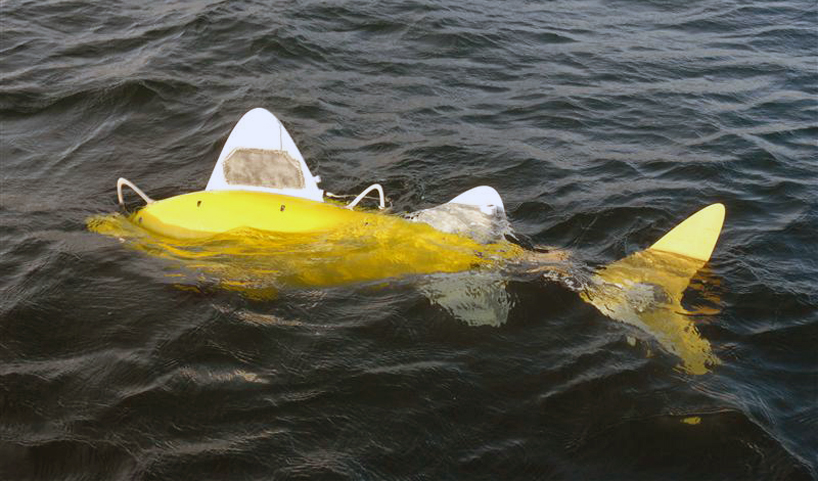 the yellow, tuna-shaped fish model above is the one deployed for testing in spain

the fish are each about 5 feet (1.5 meters long), about the size and shape of a tuna. their motion has also been modeled on that of real fish, relying on undulating motion instead of conventional propellers, and a dual-hinged tail to permits sharp turns. micro-electrode arrays can detect lead, copper, and other pollutants, in addition to water salinity and oxygen levels.

battery-powered, the fish run for 8 hours on a single charge at a maximum speed of 1.1 yards (1 meter) per second, before being recovered by boat. safety features include a built-in airbag that inflates to make the fish surface in distress, with a  GPS and cellphone chip built into the fin to send location details via text message. in addition, the fish communicate with one another, using low-frequency sound waves over a region of water up to about 11,000 square feet (1 kilometer square), to a depth of 98 feet (30 meters). in this way, a fish detecting pollution in one area can call upon the others to create a detailed map of high and low concentrations around it, helping authorities determine the source of the pollutant.

in the future, developments should let the fish automatically return to charging stations, preventing the need for them to be collected and charged every 8 hours. researchers also note that the device’s modular design facilitates the switching out of chemical sensors to monitor specific contaminants in certain environments; alternatively, sensors and materials could be loaded towards other applications, providing different functions from search-and-rescue data to underwater photography.

video demo of the motion of the early robotic fish prototype

the fish themselves are being built by professor huosheng hu and his team at the university of essex school of computer science and electronic engineering. shoal is a consortium of business and academic organizations managed by BMT group, funded by CORDIS, the european commission community research and development information service.

Apr 02, 2021
aether's new audio-enabled eyewear collection invites users to create their own ambience
a simple tap at the temple of the frames activates rich directional sound, allowing wearers to 'seamlessly press play on the soundtrack of their lives'.
technology
0 shares
readers
connections: +1410