The Aston Martin DBX 707 – the number stands for its horsepower – is the most powerful SUV you can currently get. designboom went to beautiful Costa Smeralda, in the north-eastern part of Sardinia to test it out. Driving the DBX 707 is fun and comfortable, it gives you a feeling of control and safety which effortlessly blends with the atmosphere of inner-Sardinian valleys and their tortuous roads.

The Aston Martin DBX 707 is a successful evolution from its 2021 predecessor, with more power, state-of-the-art ceramic brakes, and a revised design. Slim curves and attention-to-detail form the car’s body, which is characterized by an elegant yet robust front with its enlarged grille and an aerodynamic, eye-catchy rear. Not very long after the start of our test drive we got pulled over by the highway patrol for speeding – with an engine capable of going from 0 to 100 km/h in only 3.3 seconds it is easy to get overwhelmed by its power – or maybe the police officers were just fascinated by the mysterious look of the DBX 707. 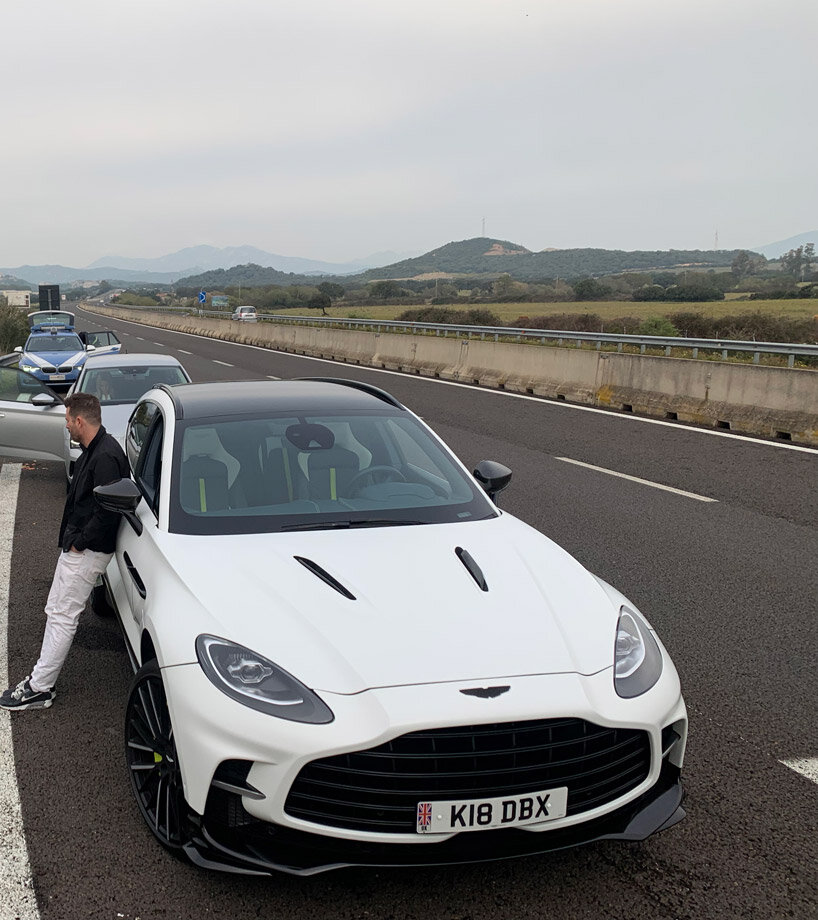 the test drive was soon interrupted by a police speeding check, which luckily only resulted in a small fine. image © designboom

THE MOST POWERFUL SUV YOU CAN GET

‘The huge gains we have found in both power and torque demonstrates not only the inherent prowess of the 4.0-litre biturbo V8, but Aston Martin’s appetite and ability for finding uncompromising engineering solutions.’ Aston Martin’s Head of Powertrain, Ralph Illenberger says. ‘The combination of this magnificent engine with a new 9-speed ‘wet-clutch’ transmission sits at the heart of DBX707’s formidable capabilities and unforgettable character.’

Every area of the car has been enhanced to boost performance, intensify driving pleasure and amplify its on-road presence. A huge effort was spent on realizing the full potential of the DBX’s 4.0-litre V8 engine which now features ball-bearing turbochargers and engine calibration to liberate more power (707 HP) and torque (900Nm). A 9-speed ‘wet clutch’ automatic transmission is also a new addition to Aston Martin’s flagship SUV. 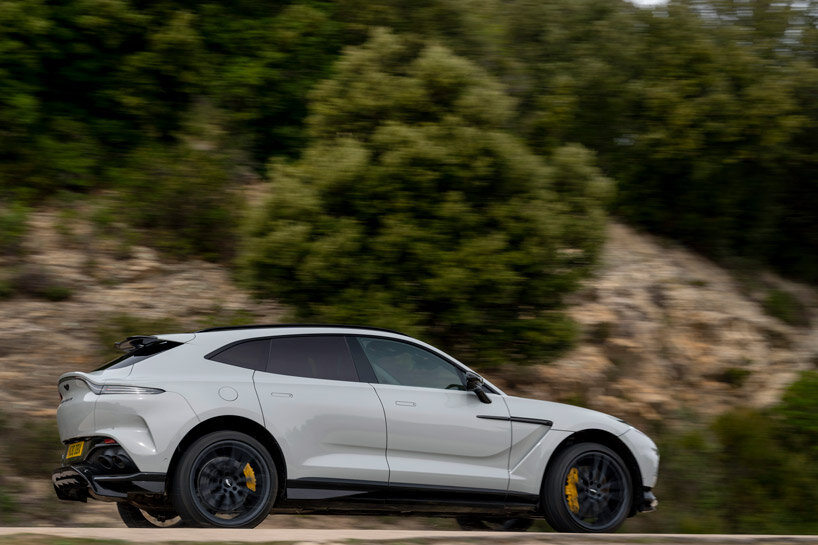 Driving the DBX 707 is fun and comfortable, it gives you a feeling of control and safety. All images courtesy of Aston Martin Lagonda, unless stated otherwise.

Other core improvements in the DBX707 is the standard fitment of Carbon Ceramic Brakes, improved pedal feel, and braking response. Brake cooling has been revised to take air from both the main cooling intake and the underfloor one. DBX707’s torque distribution front-to-rear remains fully automatic, with the ability to send up to 100% of the torque to the rear axle on demand. 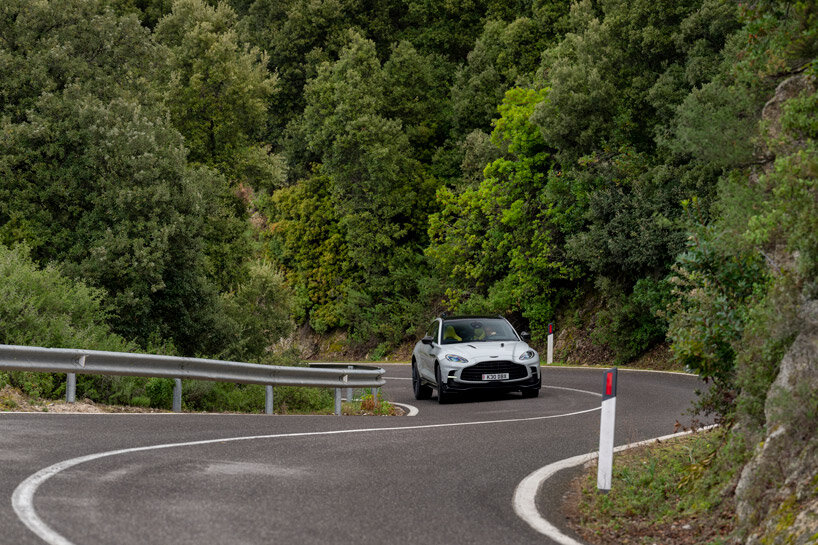 Every area of the car has been enhanced to boost performance, intensify driving pleasure and amplify its on-road presence.

TOTAL CONTROL TO THE DRIVER

The key settings are available to the driver via the central console that controls the suspension mode, ESP, manual gear selection, and active exhaust switch. The latter opens the valves of the new quad tailpipe sports exhaust system, for a solid sound you can’t dislike. The infotainment system works just fine, but it’s perhaps the only aspect of the British SUV that has some room for improvement, especially regarding the built-in navigation system, which gave us some questionable directions during the Sardinian drive.

‘With the DBX707 we have pushed the boundaries in every area to create a car which sets new standards of performance and desirability,’ says Aston Martin Chief Executive Officer, Tobias Moers. ‘The fastest, most powerful, best handling and most engaging car of its kind, it propels Aston Martin to the pinnacle of SUV performance’. 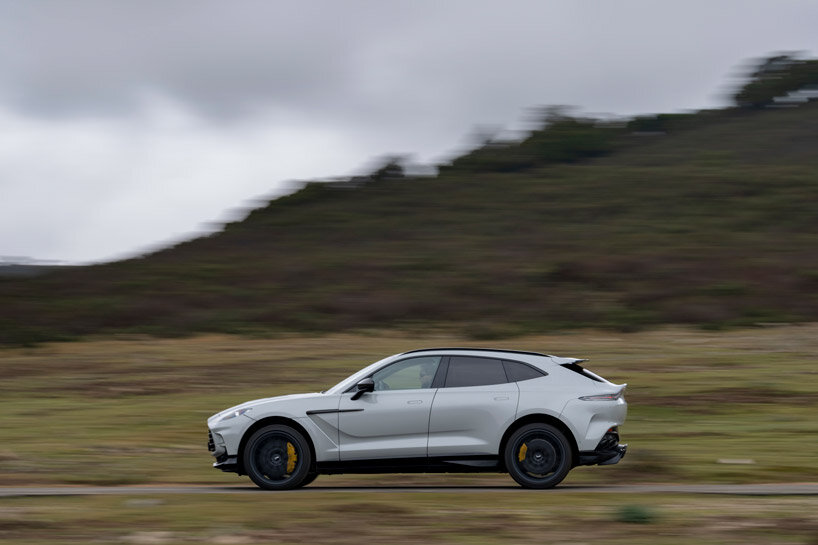 Slim curves detail the car’s body, fronted by an elegant yet robust grille and an aerodynamic, eye-catchy rear. 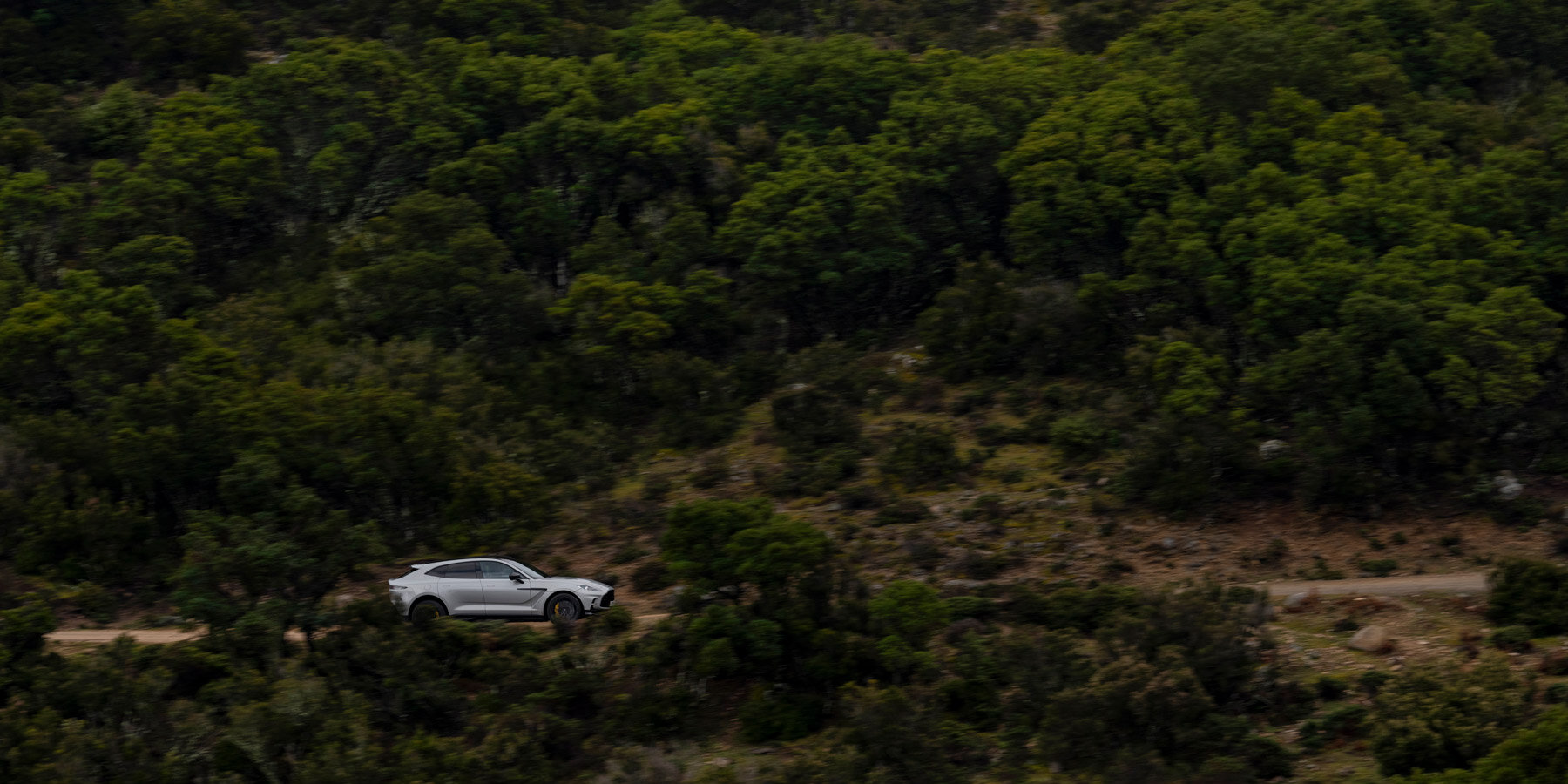 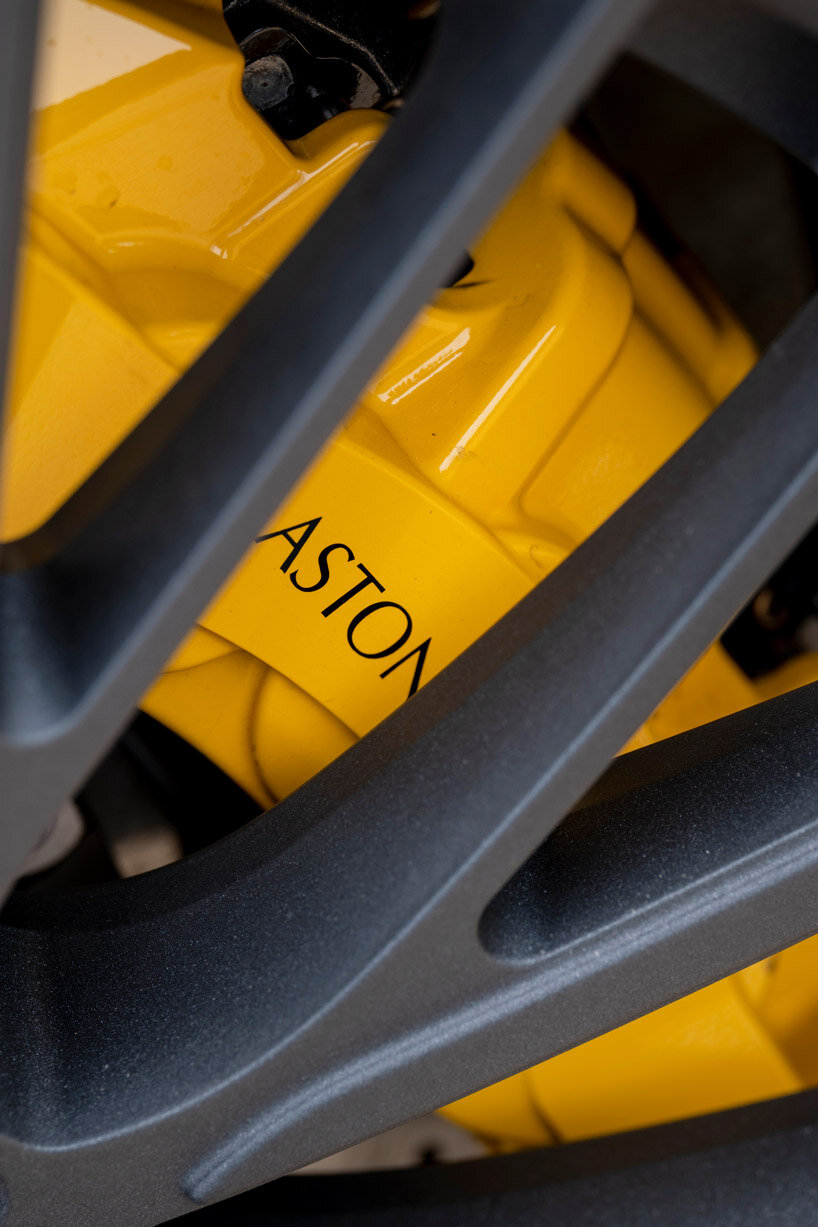 Other core improvements in the DBX707 is the standard fitment of Carbon Ceramic Brakes, improved pedal feel, and braking response. 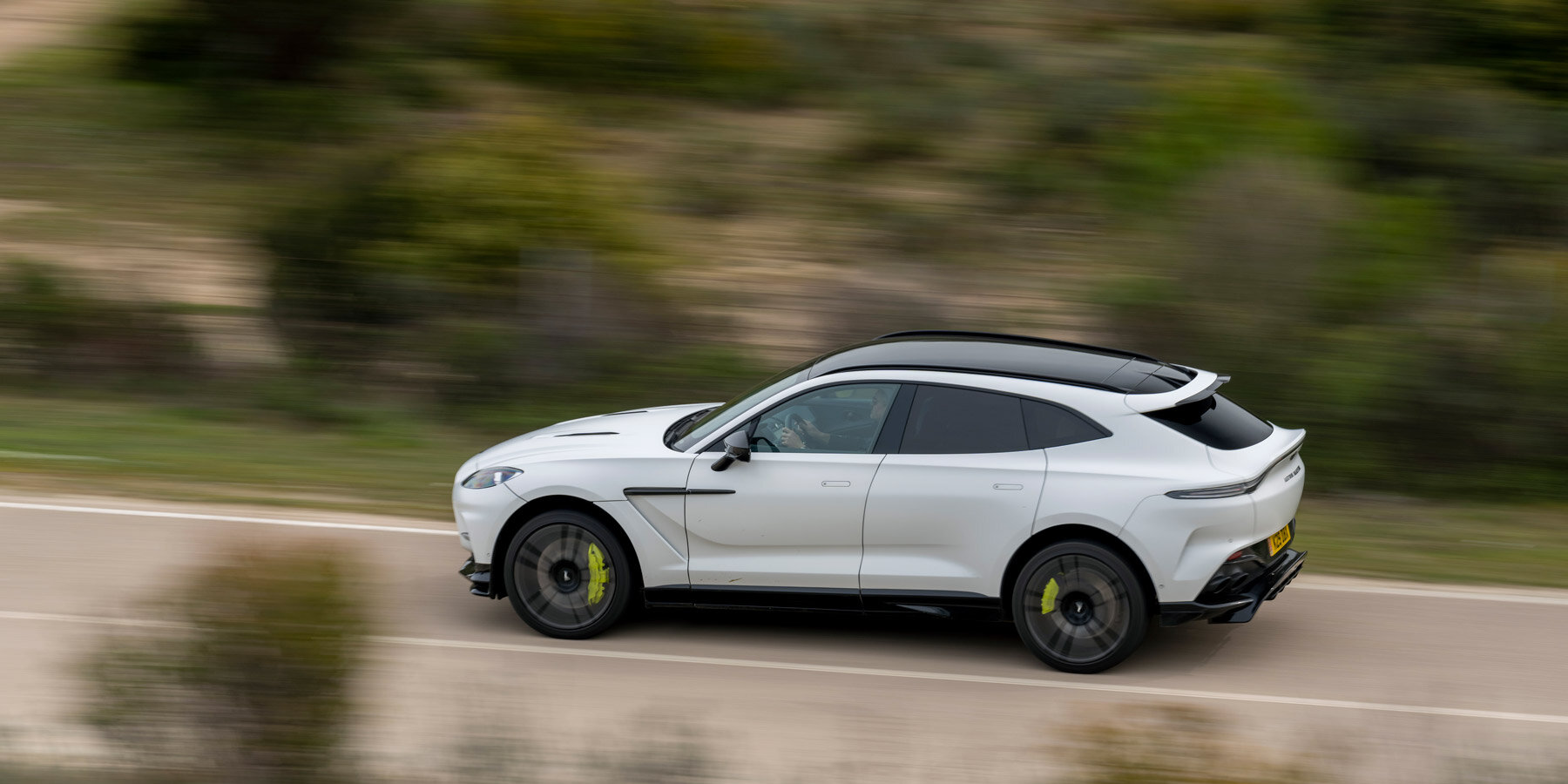 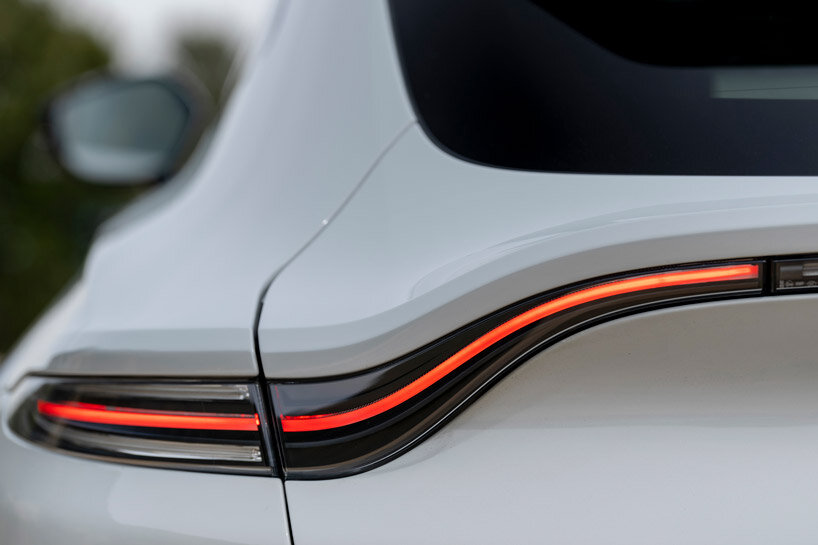 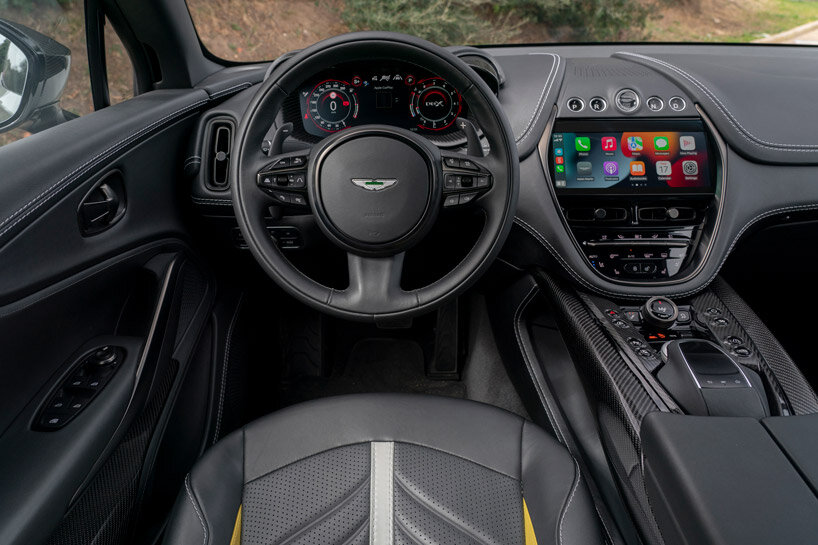 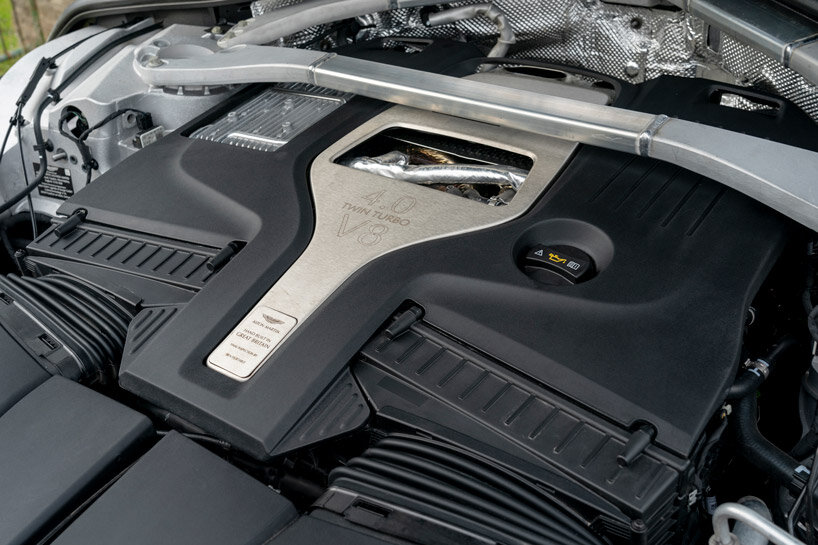