french carmaker renault revealed new life in the alpine division which brought the company success in the 1960s. the ‘vision’ is a mid-engined two-seater coupé that heralds the style and performance of a road-going sports car of today.

‘motorsports and sports cars are deeply rooted in the DNA of groupe renault,’ describes CEO of renault groupe carlos ghosn. ‘earlier this month we announced our return to formula one with a renault team, and today we are announcing alpine. this is an exciting next step in our strategy to leverage talent and technology between road and track, and we look forward to reaching new customers in the sport premium cars segment.’ 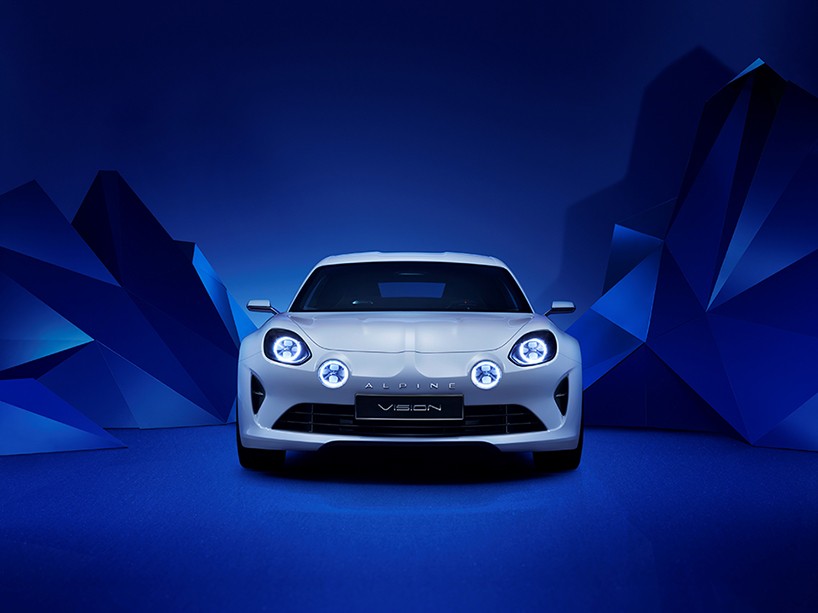 the alpine ‘vision’ has low profile, rounded bonnet, twin round headlights and sculpted sides that flow to its pronounced rear wings that narrows towards the rear to form an elongated tail. the marque’s arrowed ‘A’ badge is visible on the front wings and on the sides of the car, along with more subtle references to the legendary ‘A110’ rally car. its diamond turned wheels suggest speed, while the muscular stern integrates air intakes into the rear panels to facilitate engine cooling. the rear lights incorporate a distinctive x-shaped lighting signature and the rear window similarly pays tribute to old models. 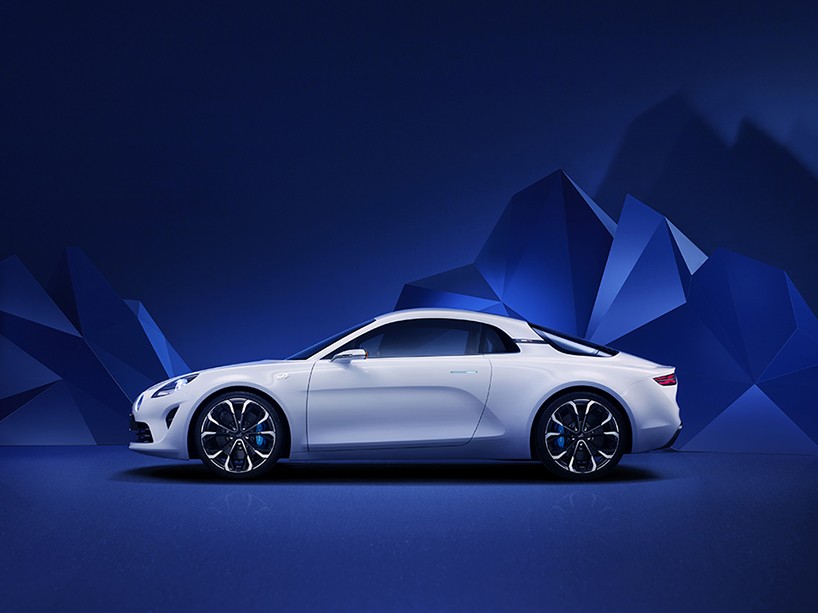 ‘the alpine vision show car ticks all the boxes expected of a modern, exclusive alpine sports car,’  explains antony villain, director of design at alpine. ‘it blends a fiery spirit inspired by motorsport success, with alpine’s legendary expertise and a french flavour that can be found in every detail. the alpine vision is aimed at aficionados and connoisseurs, and 80% of the style of our forthcoming road car will be reflected in it.’ 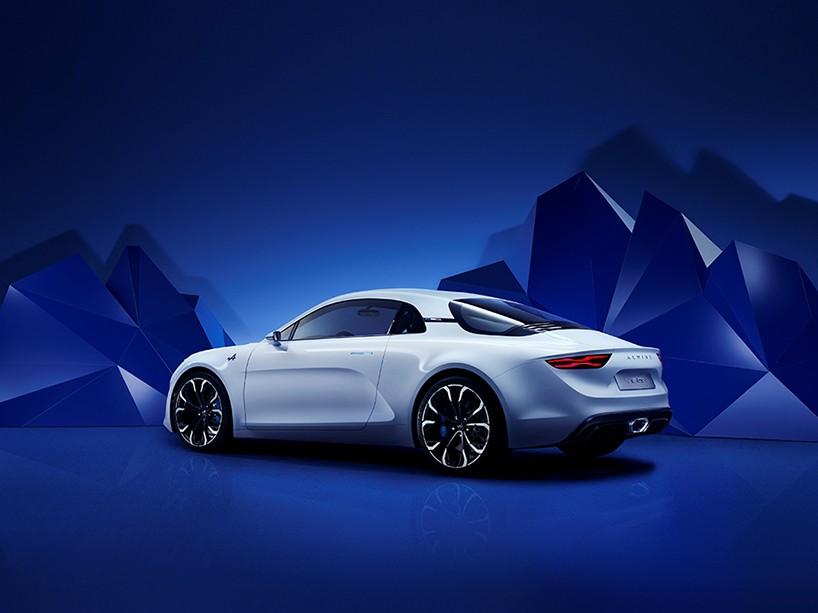 the ‘vision’ features a four-cylinder engine

inside are a contrast of materials and colors. careful detailing is juxtaposed with elements that seem to be in their raw state. in employing a blend of leather, microfibre fabrics, aluminum and carbon, the cabin exudes a contemporary feel. the centre console rests upon a prominent leather-trimmed aluminum structure which takes cues from aircraft cockpits. it houses a multimedia touch-screen tablet topped by a circular stopwatch. 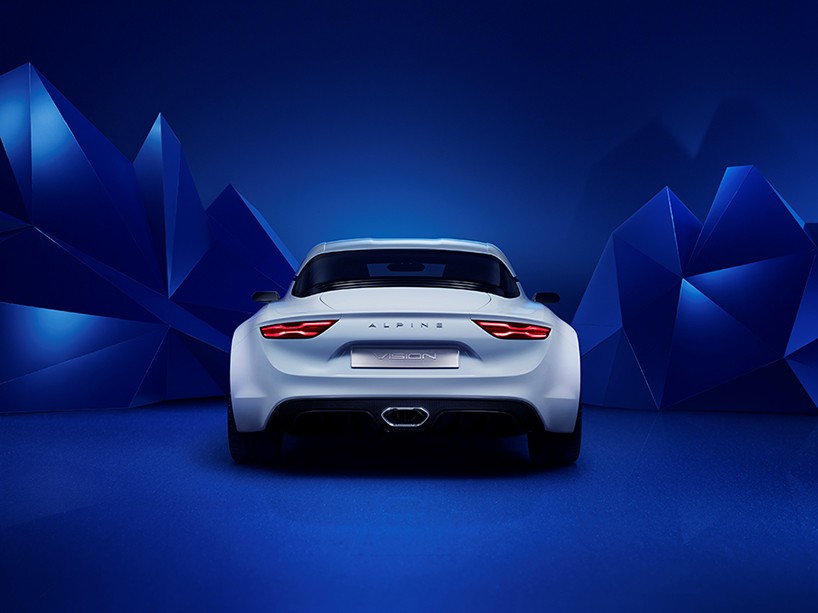 the rear lights with the single exhaust

‘the alpine vision explores the full sporting spectrum and packs all the ingredients traditionally associated with french sports cars,’ says interior designer of the alpine ‘vision’ laurent negroni. ‘it is an object of seduction and a sensory experience – a car that generates intense driving pleasure, particularly on twisty roads, along with timeless style and a unique personality. but we were also eager to incorporate another vital ingredient: refinement. this can be seen clearly in the alpine vision’s design, materials and in-car ambience – all of which benefit from painstaking attention to detail.’ 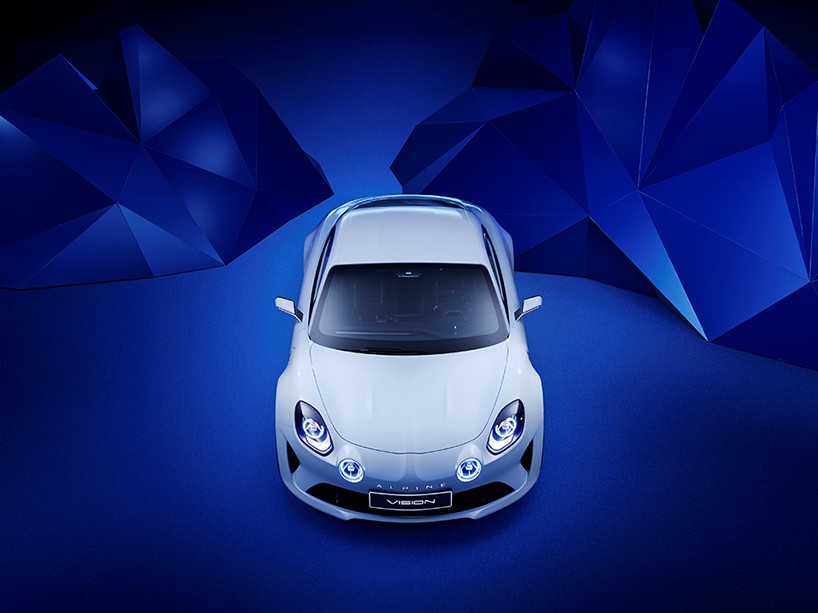 the four-cylinder turbocharged engine delivers its power with an inviting soundtrack, and thanks to the car’s lightweight nature, every inch of energy is dedicated to performance. sprinting from a standstill to 100 km/h, the car will accelerate in 4.5 seconds. the fun factor of the alpine ‘vision’ is intense at all speeds. made in dieppe, france the new alpine ‘vision’ will go on sale in 2017 initially in europe, followed by other markets worldwide. 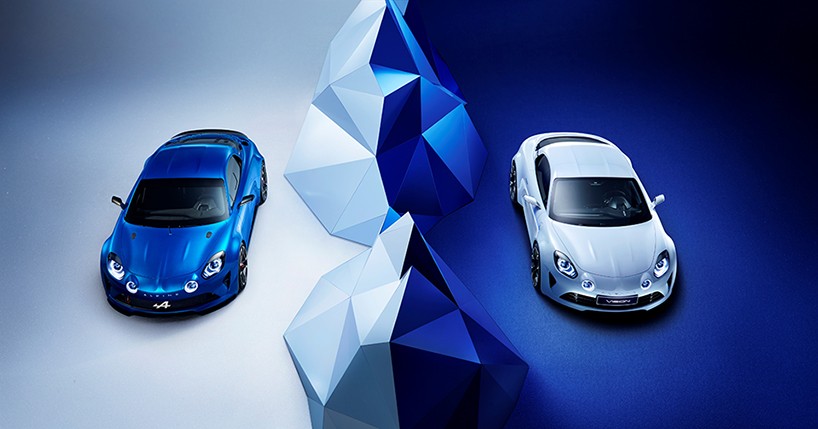 the alpine ‘vision’ in two colors 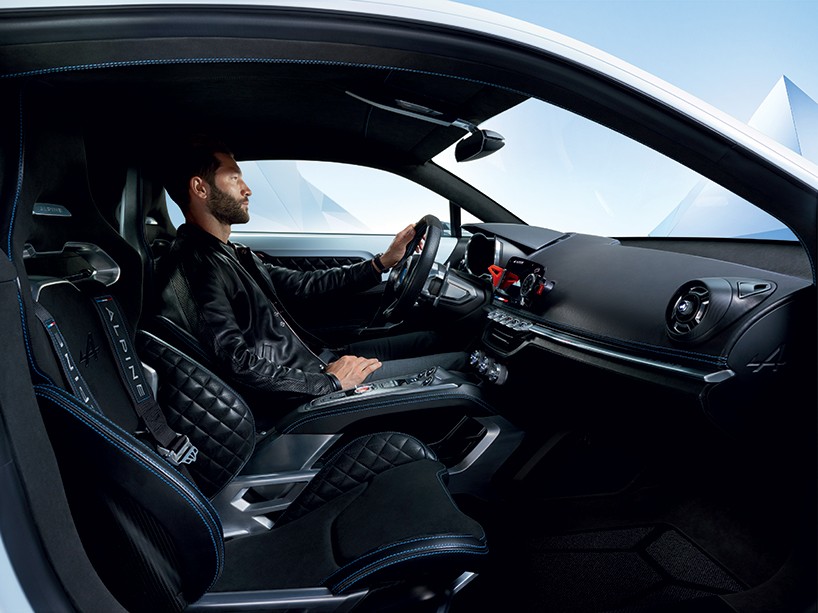 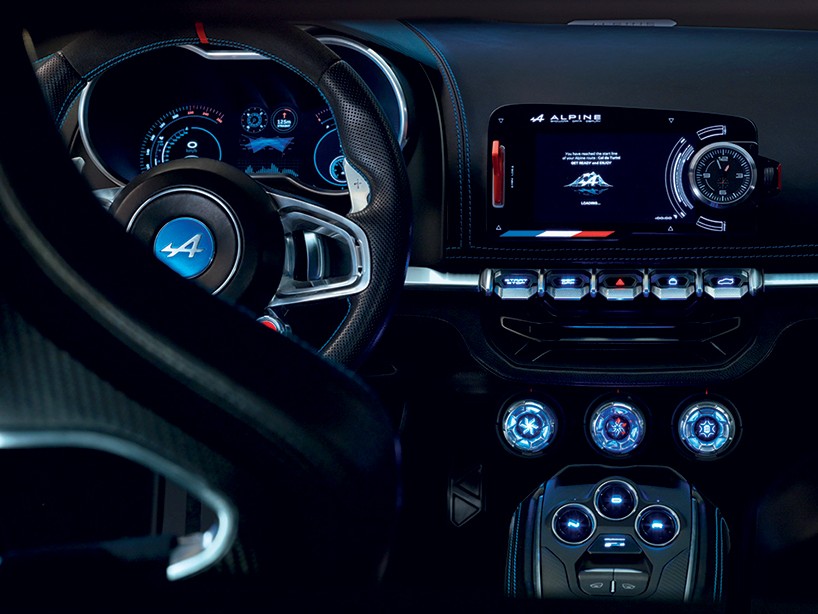 a mix of carbon fiber and aluminum cover the dashboard