Japanese researchers Michio Kawai, Minghao Nie, Haruka Oda, Yuya Morimoto, and Shoji Takeuchi from the University of Tokyo published their findings and progress on creating a 3D living skin made of human cells for robots last June 9th. The skin materials for the robots have transitioned from stiff and heavy to soft and pliant materials to better resemble the looks and functions of human beings. The researchers have adopted a bio-hybrid approach to creating robots covered with tissue-engineered skin. They write that skin coverage not only results in a human-like appearance but also enables self-healing functions.

‘We demonstrate the seamless coverage of a three-joint robotic finger by culturing a single piece of skin tissue surrounding the robotic finger.’  They have been inspired by grafted hydrogels – the medical treatment for deeply burned skin – and demonstrated healing the wounds of the skin that covers the robotic finger – their test subject – by culturing the wounded tissue grafted with a collagen sheet, the collagen component being known as a protein that contributes to the skin’s elasticity and stretchiness. Their findings aim to show the potential shift from traditional robotics to the new scheme of biohybrid robotics, leveraging the advantages of both living materials and artificial materials. 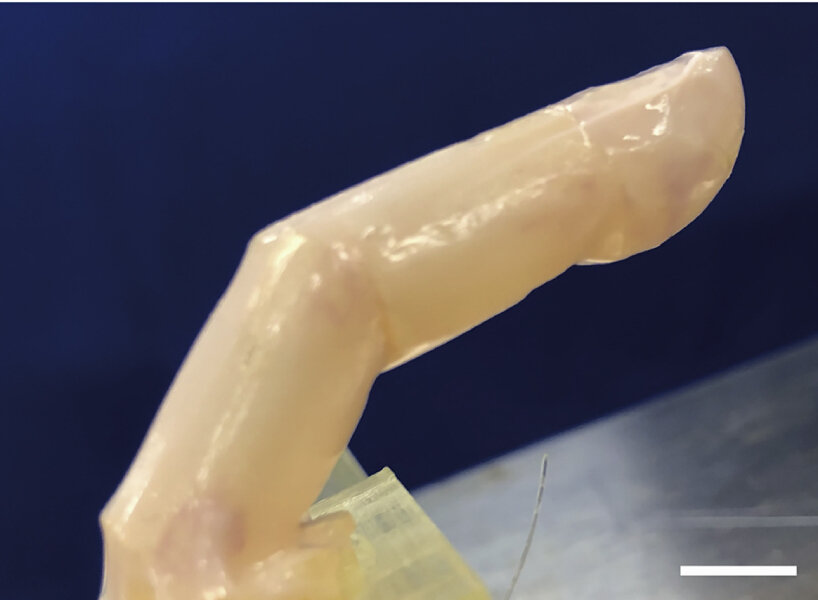 For the researchers, humanoids are robots created with human forms or characteristics that also have the potential to interact with human beings. They believe that by replicating the appearances and functions (such as self-healing) of human beings, humanoids have the potential to establish more harmonic and natural human-robot interactions. ‘Here, we propose the use of skin equivalent, a living skin model consisting of cells and extracellular matrix, as a human-like and self-healing coverage material for robots. We fabricated a three-joint robotic finger covered with skin equivalent by developing a method to cover three-dimensional objects with skin equivalent.’ 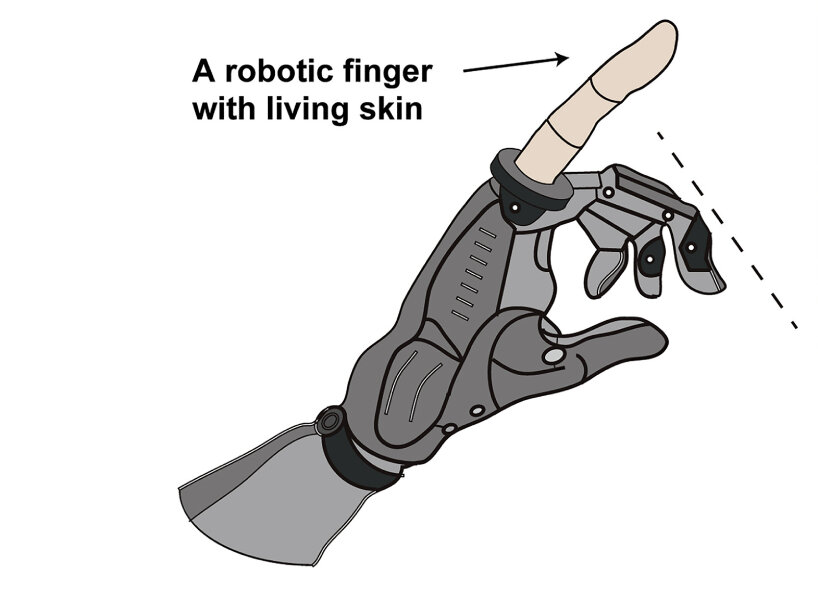 The future of robots

The present work of the researchers shows the construction of a robotic finger covered with a living skin equivalent. The anchoring structure located at the stem of the finger allowed them to cover the uneven surface of the robotic finger by controlling tissue shrinkage. ‘In addition, epidermal structures could be uniformly formed by seeding cells from multiple directions. The wound was also repaired by dermal fibroblast activity after the collagen sheet was applied to the wound site,’ the researchers write. Their results and progress display the applicability and possibility of robots being covered with living materials and biological functions in the future to make them more likable to look like social beings in society. 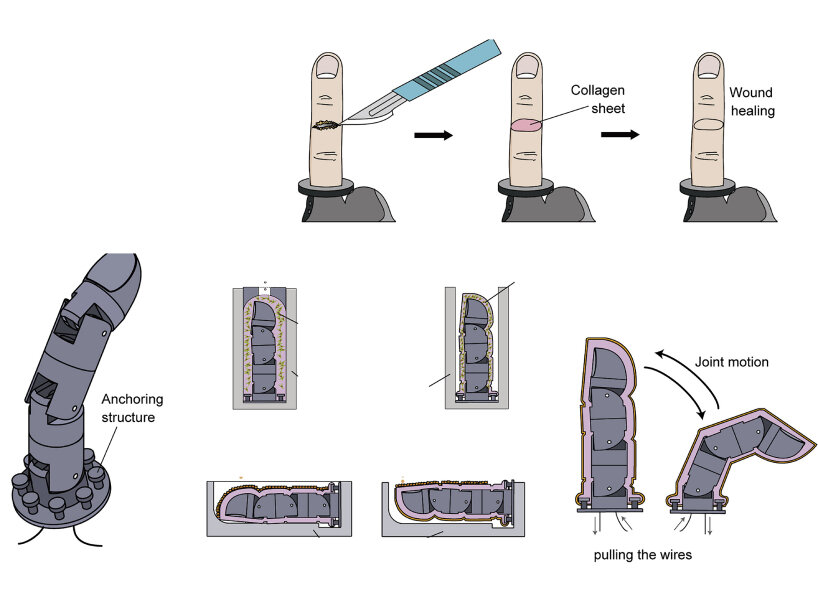 collagen sheet is used as a component of living skin 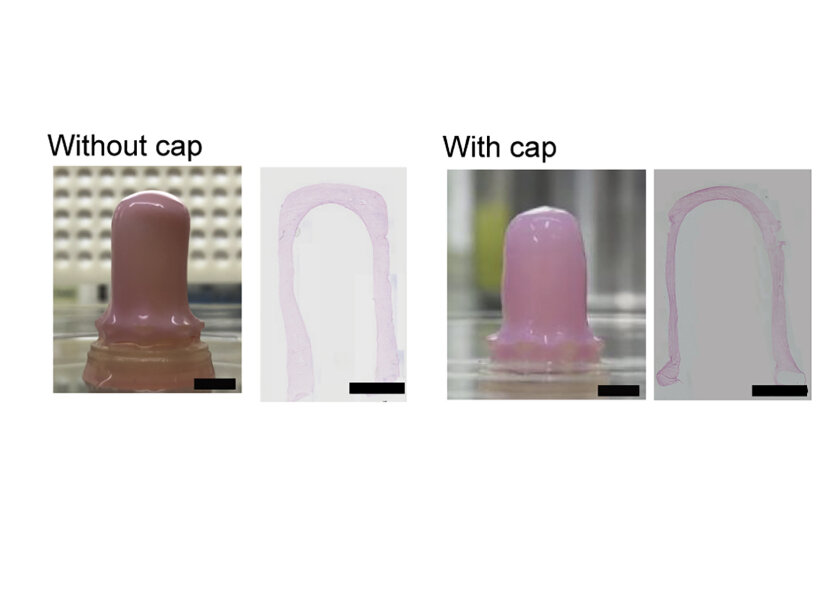 the living skin is also made of human cells 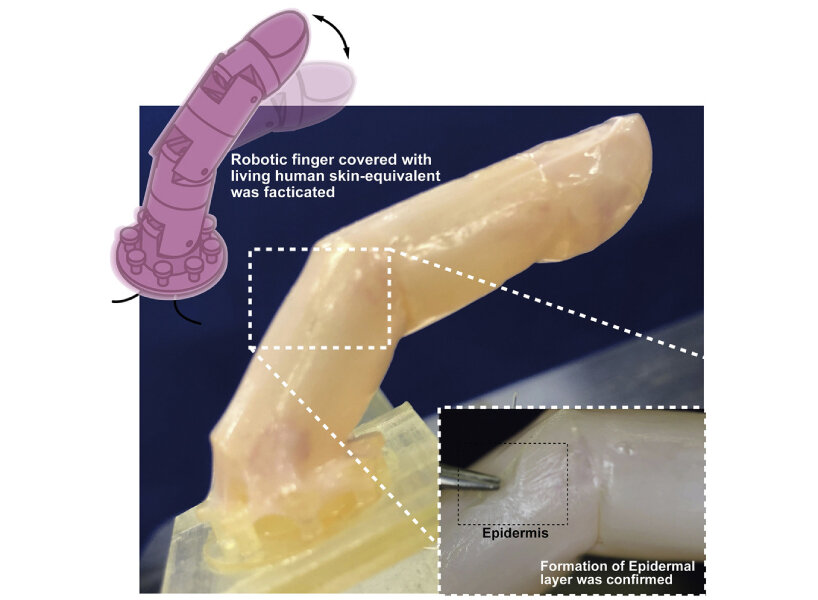