‘robojelly’, a first generation of the ‘biomimetic jellyfish robotic’ vehicle being developed by alex villanueva, is an underwater surveillance robot that is powered by the ocean water of its surroundings. the device is modeled as closely as possible after aurelia aurita, the moon jellyfish, for its mechanisms of movement. in addition to potentially serving in the future in underwater recovery efforts, the vehicle provides insight on jellyfish propulsion mechanisms, and concomitantly offers an example of how a hydrogen-fuel-powered machine might eliminate the need for batteries, fuel, or external electricity.

video of the ‘robojelly’ prototype

originally developed in 2009 for the office of naval research, the newest iteration of the robot is composed of silicone and shape memory alloys (of nickel and titanium)– materials that ‘remember’ their original shape, and return to it when unprovoked– wrapped in platinum-coated pure carbon nanotubes. chemical reactions between the platinum of its surface and the oxygen and hydrogen in the water produce heat that is transferred to the artificial muscles of the robot, reshaping them.

the current prototype flexes each of the eight segments composing its bell simultaneously but researchers are looking into ways to control each individually, permitting it to move in different directions. the team behind the ‘biomimetic jellyfish robotic’ is composed of researchers from five US universities, most foremost virginia tech where villanueva is based.

an article on ‘robojelly’ is published in the journal of smart materials and structures, volume 21, number 4.

the robot is modeled after aurelia aurita, the moon jellyfish, pictured above 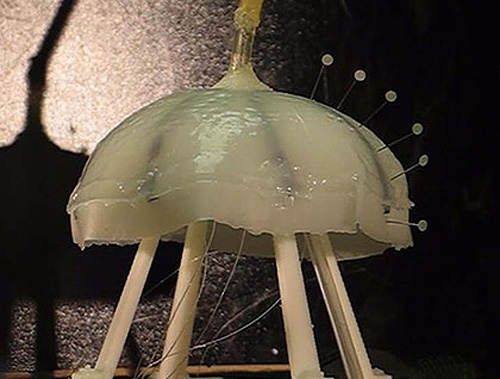