technology 11k views
MIT researchers at their computer science and artificial intelligence laboratory (CSAIL) have created SoFi, a silicone rubber robotic fish that could unlock secrets of marine life. according to their report this is the first of its kind that can swim untethered in three dimensions for extended periods of time.
the researchers behind the new study, published in science robotics, say robotic fish technology could aid scientists in learning about organisms that are hard for humans to reach. tested in fiji, SoFi’s spec sheet includes being able to swim more than 50 feet below water for a duration of 40 minutes. 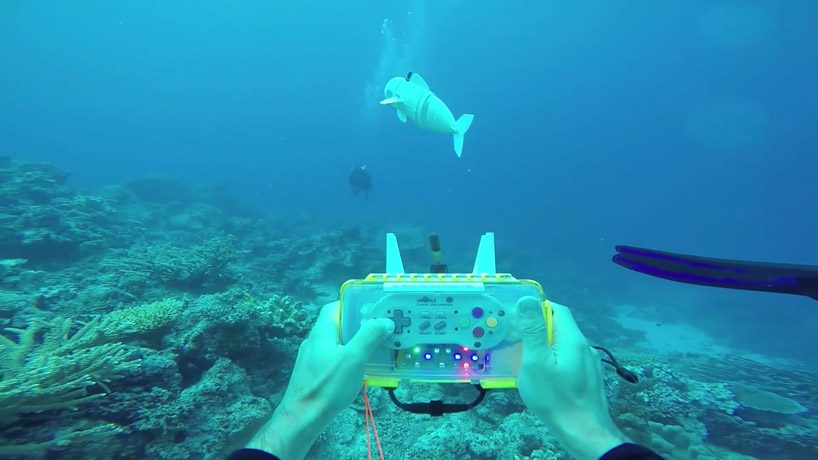 SoFi has been designed to withstand strong currents and is able to capture high-res photos using a fisheye lens. using its undulating tail and a unique ability to control its own buoyancy, SoFi can swim in a straight line, turn or dive up or down.with its alternating movements producing side-to-side actions that mimic real those of real fish, perhaps explaining why it is able to swim right up close and personal with other sealife, as the report highlights.
the back half of the robot is comprised of flexible plastic and silicone rubber whilst urethane foam chambers provide buoyancy. many of SoFi’s components are 3D printed including the head, which encases all of the electronics. the team has also hacked a super nintendo controller making it waterproof and incorporating and acoustic communications system that enables them to change SoFi’s speed and have it make specific moves and turns.
kieron marchese I designboom