automated machines which led to the development of the industrial robots currently available today.

in the greek myth pygmalion, king of cyprus, is a sculptor who fell in love with his ivory statue of a woman. his passion was so overwhelming, that he asked aphrodite to transform the statue into a living person.

one of the earliest documented automata makers was hero of alexandria, a greek mathematician, physicist and engineer who lived in 10-70 AD. descriptions on various automata (automaton meaning: moving itself) are included in see hero’s pneumatics here

leonardo da vinci sketched a complex automaton around the year 1495. the design of leonardo’s robot was not rediscovered until the 1950s. the robot, which appears in hiss sketches, could, if built successfully, move its arms, twist its head, and sit up. 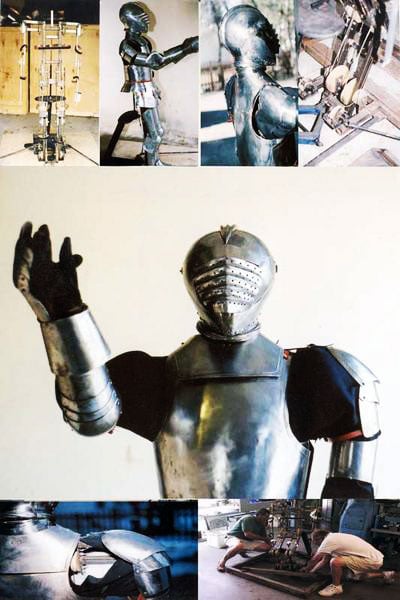 this medieval robot was built by roboticist mark rosheim from leonardo’s drawings for a discovery channel program. see the device here and here

the flute player, invented by the french engineer jacques de vaucanson in 1737.
he also constructed a mechanical duck. 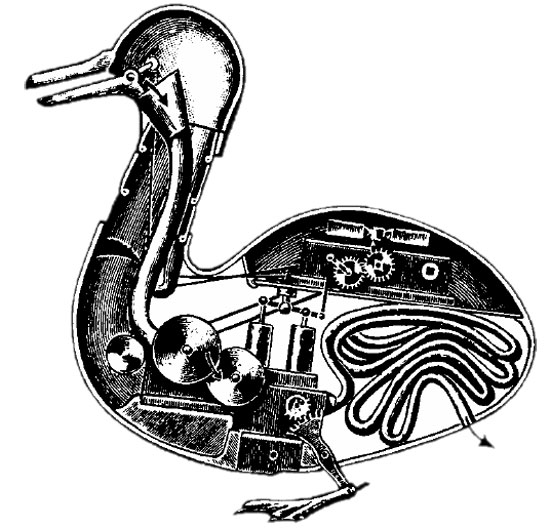 jaques de vaucanson’s mechanical duck, 1738 it had over 400 moving parts, and could flap its wings, drink water, digest grain, and defecate

in 1769, a chess-playing machine called ‘the turk’ was created by the austro-hungarian author and inventor wolfgang von kempelen. the turk made the rounds of the courts of europe and was exhibited from 1770 for over 84 years, by various owners, purporting to be an automaton, but later explained, after its destruction by fire in 1854 as an elaborate hoax. the turk was operated from inside by a hidden human director, and was not a true automaton. read more here 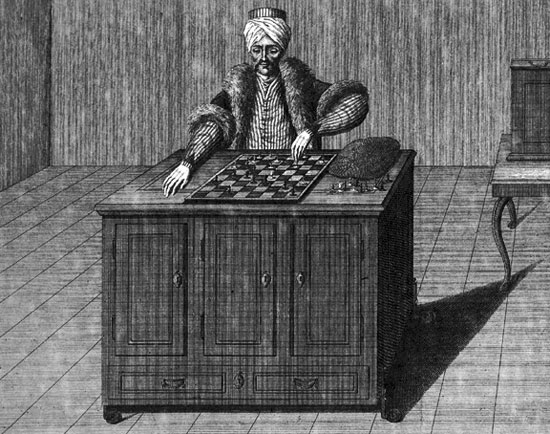 image of a copper engraving from karl gottlieb von windisch, 1783

designed by the canadian inventor george moore in 1893, this life-size (6-foot tall) steam-powered android was constructed of tin. an exhaust pipe led from the engine to the nose of the figure, from whence steam escaped when the machine was in motion. The body contained a motor and a gear train for motion. 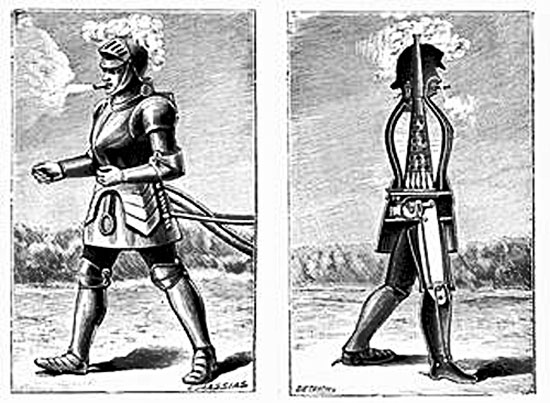 the term ‘robot’ derived from a czech word ‘robota’, meaning ‘drudgery’ or ‘slave-like labor’. it was first used to describe fabricated workers in a fictional 1921 play by czech author karel capek entitled ‘rossum’s universal robots’. in the story, a scientist invents robots to help people by performing simple, repetitive tasks.

for the new york world’s fair 1939, westinghouse electric corp. builds a mechanical man ‘elektro’. humanoid in appearance, the robot relied on a combination of motors, photoelectric cells, telephone relays and record players to perform 26 preprogrammed routines, each one initiated by voice commands from a human co-star. these were spoken into a telephone connected to the robot’s chest, where circuitry converted each syllable into a pulse of light and transmitted it to a photoelectric cell. a second circuit added up the syllables and triggered relays to operate the corresponding electromechanical functions: a command with three syllables, for example, would start the robot’s routine, and four syllables would stop it. as part of these routines, elektro would raise and lower his arms, turn his head, move his mouth, count on his fingers and even smoke a cigarette and puff out smoke. his photoelectric eyes could distinguish red and green light. read more here and here

the original elektro appeared in the film ‘sex kittens go to college’ (he played thinko, the greatest electronic brain in the world) 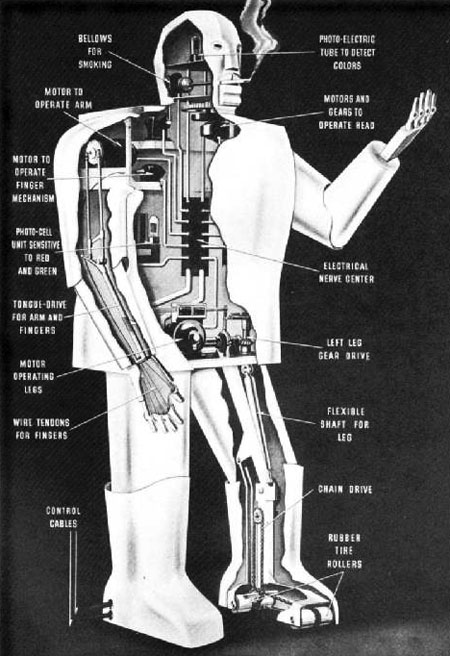 but real robots wouldn’t become possible until the 1950s and 1960s, with the invention of transistors and integrated circuits. garco was created in 1953 by the american inventor harvey chapman. the robot was built from discarded aircraft parts andoperated by remote control. 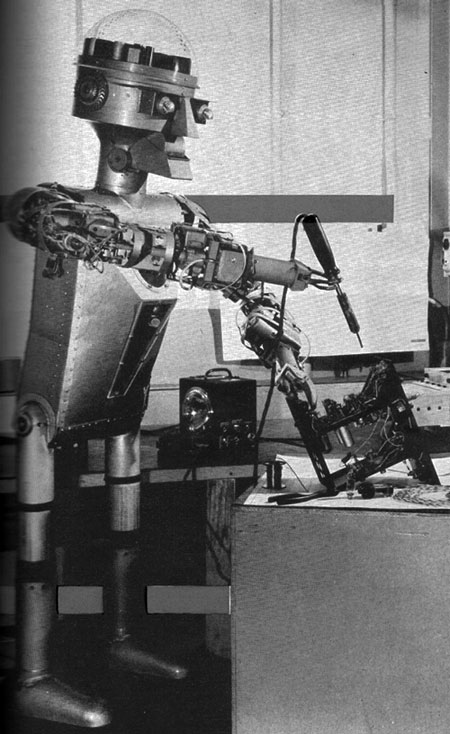 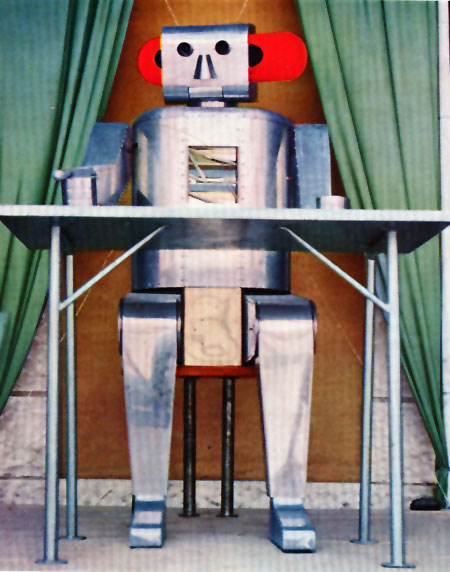 romolo II was exhibited in rome in 1957. he reacted to external stimuli, his eyes consisted of camera lenses and his body was built with sensors.

bipedal movement is essentially a continuous, controlled fall that’s avoided only by precisely timing each step. people do it without thinking, so it seems simple. but the computational horsepower needed to prevent a biped bot from falling on its face is considerable. early mobile robots had to drag a cable connecting them to a big computer. see designboom’s history article ‘robot sapiens’, compiled back in 2001.

a rusted symbol of a once-promised technical and social progress: a massive statue of a robot stands outside the former soviet-era synthetic rubber factory in sumgayit, azerbaijan 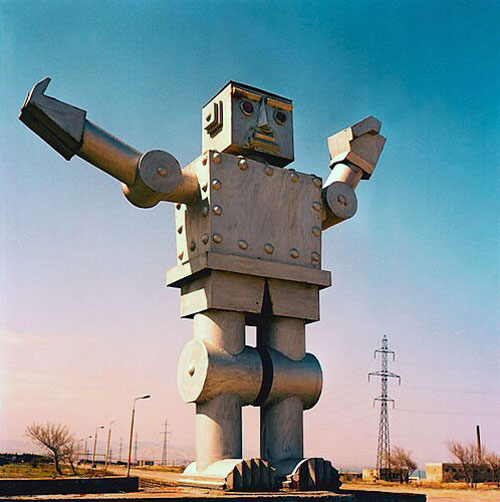 rena effendi’s photo of a massive statue of a robot 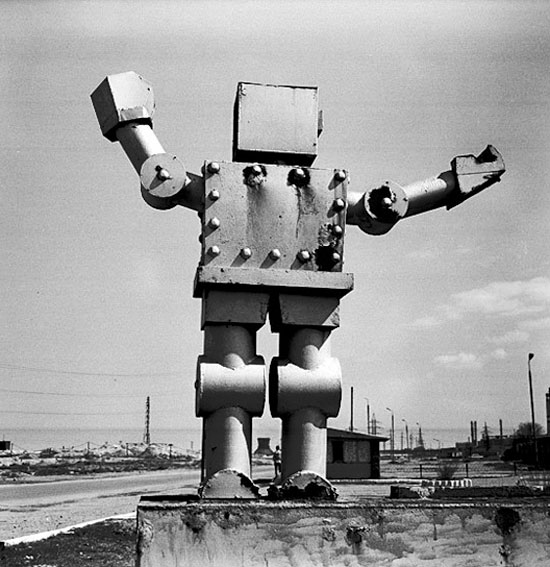 john palmisano estimated that about 50,000 people are interested in robotics online per day but he also found out that the number of robotics related google searches has been dropping year on year. in the last four years it has dropped an average of about 40%! it seems that most hobbyists are under the age of 20 and over the age of 40. 85% are estimated male. read more here