roland gumpert, the man behind the gumpert apollo, believes his nathalie sports car could be the solution to limited range and slow charging when it comes to EV‘s. at the core of this 2-door electric supercar is a 2way energy concept made up of a methanol fuel cell which charges the batteries as you drive. that’s promise of a never-ending EV road trip. 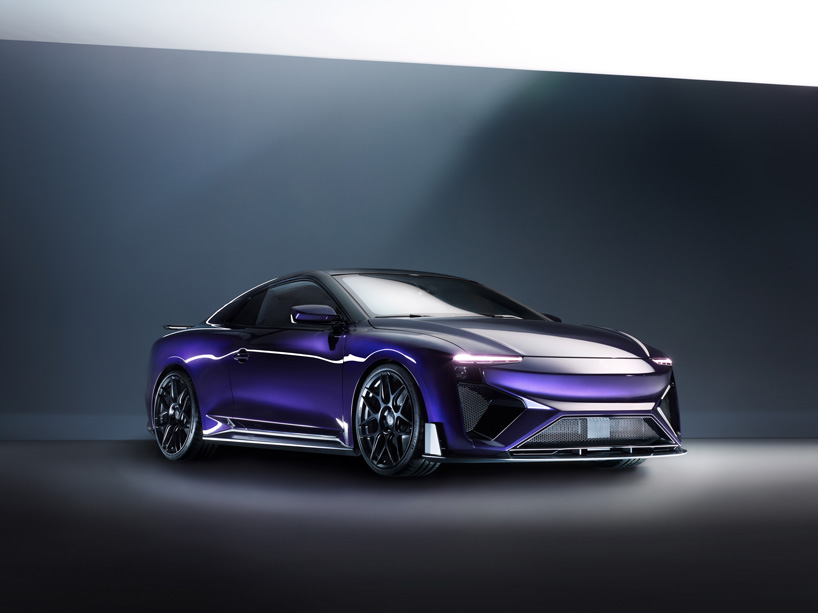 the nathalie boasts 800-horsepower, a 530 mile range at 50 mph (or 745 mi in eco mode). it can go from 0-60 in under 2.5 seconds thanks to its four electric enginesat each wheel and has a top speed in excess of 306 km/h (190 mph). a chrome molybdenum steel tubular design and carbon exterior-chassis is light weight to provides optimum performance. meanwhile, an aerodynamic package includes a vortex generator, rear wings and racing rims with slicks. 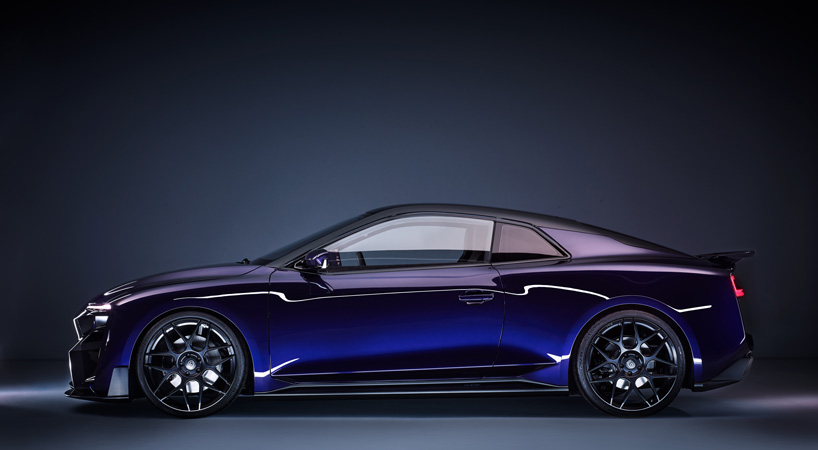 ‘we asked ourselves what the big difference between gasoline-powered and electric-powered vehicles is?‘, explains lorenz loew, the designer behind nathalie. ‘thrust is precisely the high emotion that we have seen from the very beginning but also a kind of whispering, more of a gliding on the road. we conveyed this feeling of gliding through an extensive but soft geometry on the vehicle.’ the futuristic design puts energy on the tapered fenders and abandons the exhaust pipe in favour of a carefully articulated diffuser with lower scoops surrounding the front lights. inside, the rapid display is directly in the driver’s line of sight giving an overview of the speedometer, g-forces, battery levels, fuel cell recuperation and performance. a comfort display is conveniently located in the middle console and shows items such as navigation, media, climate control and other fundamental vehicle function. 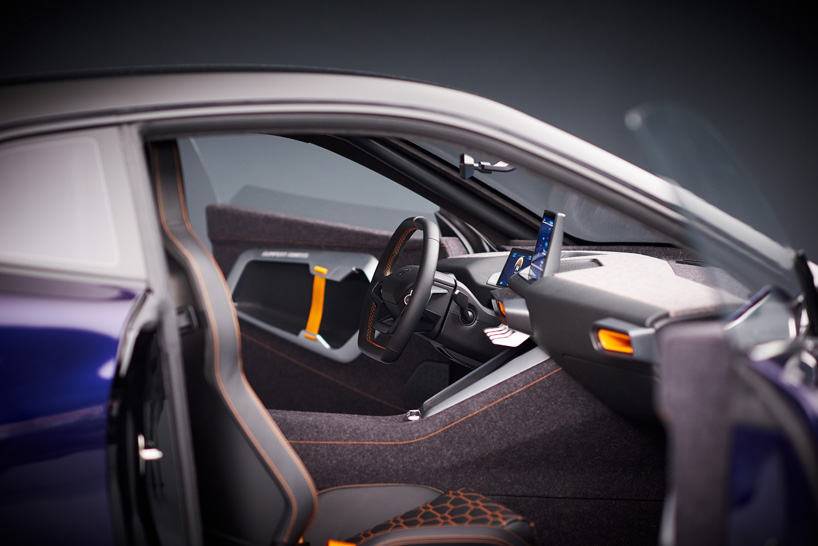 how does a fuel cell work? here’s the sciencey bit. basically, it uses two electrical conductors (the anode and the cathode) where a chemical reaction between methanol and air produces water and CO2. these reactions emit electrons into the fuel cell, providing enough energy to keep the car going and re-juicing the battery whenever the car breaks or is at low speeds. 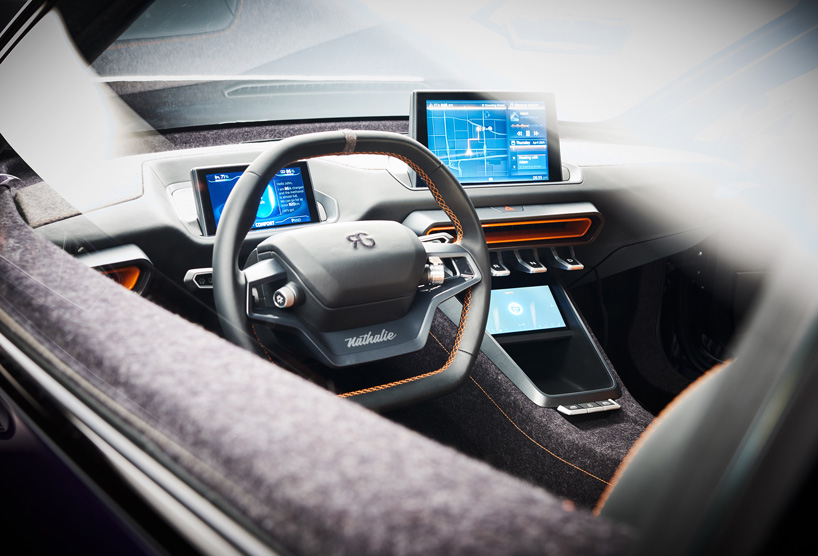 ‘[methanol] is far superior to all other fuels to date as it can be synthesized in an environmentally neutral way. black methanol, is understood as refined fossil fuel,’ it explains on the roland gumpert website. ‘green methanol however is synthesized. it binds the CO2 contained in the air and releases it later while providing energy. this makes green methanol a great clean and neutral energy carrier. the products of the chemical reaction are water and CO2 with a negligible percentage of nitrogen oxide.’ 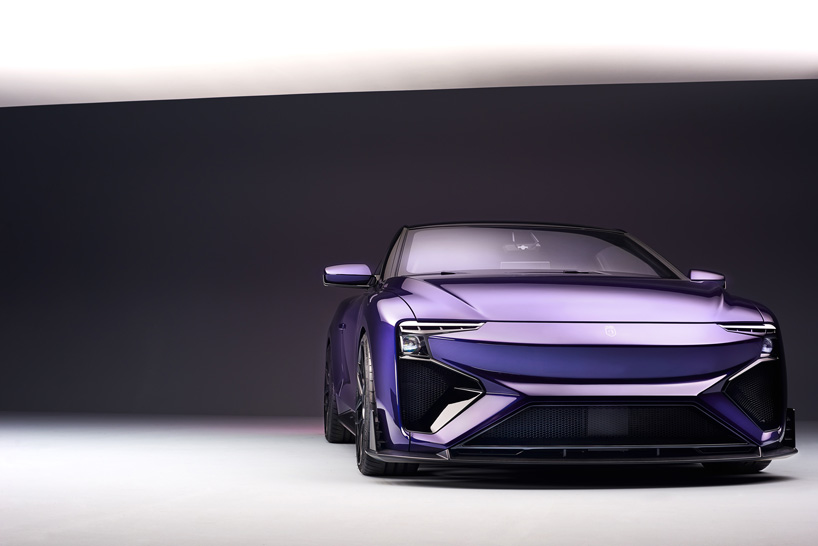 it proposes a solution to limitations when it comes to electric cars which are commonly used for short, regular daily trips. though their are those which offer super-fast charging and others that use petrol or diesel generators to charge batteries, roland gumpert positions methanol as a more efficient and cheaper alternative. its a third of the price of petrol and allows the car to be refuelled in three to five minutes, after which it has enough energy to hit the road again. 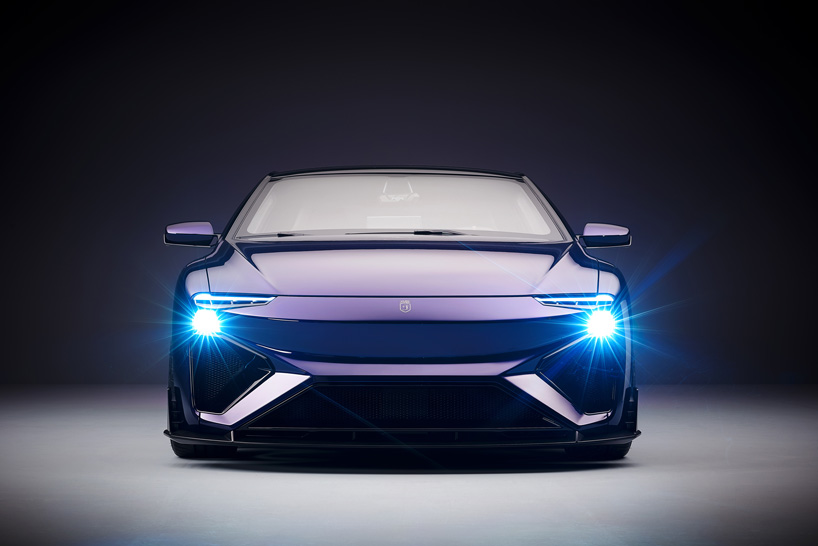 whether this is enough to usher in the methanol age is questionable however. sure the car emits CO2 which obviously isn’t a good thing, but then it’s a myth that electric cars are zero emission anyways. more the issue is that methanol isn’t readily available at gas stations and whether or not to belive that a 5 kilowatt charge rate is enough to maintain 70mph…