after months of speculation samsung finally debuted its foldable smartphone on wednesday during fifth annual developers conference. justin denison, samsung senior vice president of mobile marketing, showed off the device, which is a tablet when fully open and a phone when it’s closed. 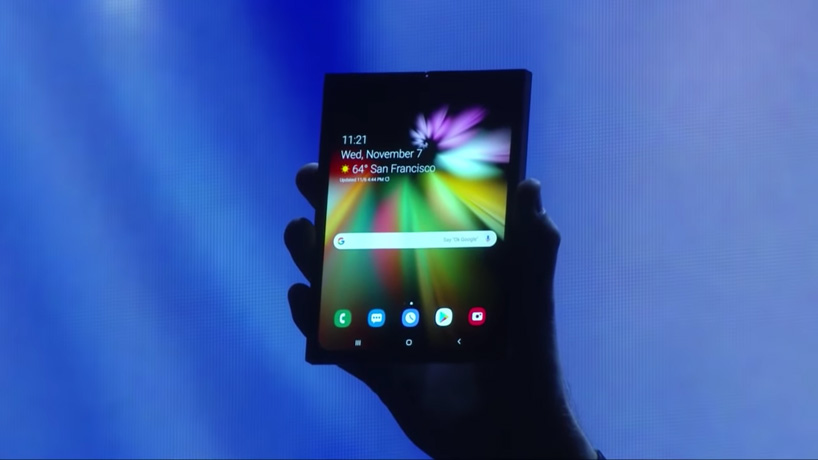 the smartphone uses a new display technology called infinity flex display that lets you open and close the device over and over again without degradation. when unfolded the device resembles a 7.3in (18.5cm) tablet and has a 4.2:3 ratio. samsung says the resolution is 1536×2152, with a screen density of 420 dpi. when closed, a separate smaller 4.58in ‘cover display’ has the appearance of a regular, if not quite retro-looking phone, with 21:9 aspect ratio. this one has a resolution of 840×1960, with a screen density of 420 dpi. 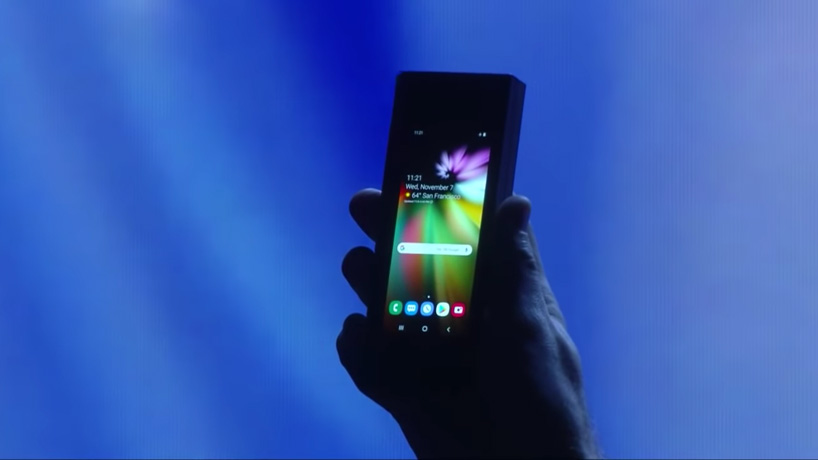 rather than give away full design specs, samsung focused mainly on the display and the device’s multi-tasking capability. the actual look and feel of the phone were kept cleverly concealed behind a chunky casing whilst some deliberate backlighting helped to maintain some mystery. denison revealed that the forthcoming handset would be able to run three apps at once.

samsung has had to develop new materials to make this new technology possible. the infinity flex display uses a polymer that samsung says is ‘flexible and tough,’ allowing it to be folded and unfolded ‘hundreds of thousands of times.’ samsung has combined this with a new adhesive that laminates the various display layers together to allow them to flex.

‘few are debating ‘if’ foldable or rollable mobile displays are the future of smartphones, the only question is when and by whom,’ explains patrick moorhead, an industry analyst at moor insights and former AMD executive. ‘the core benefit of a foldable smartphone is that the user can have the benefit of a larger display but can still fit it into their pocket, coat, or purse.‘

the effect this could have on the material future of smartphones might see capacitive touch on glass become less popular. or it could reiterate why this choice has dominated the market since apple demonstrated its value with the introduction of the iphone. obviously the technology still has some maturing to do. that hasn’t stopped the galaxy maker promising rollable and stretchable OLED displays in the future. samsung’s device is just the beginning in a possible future of foldable phones, rollable TV’s and flexible tablets.

consumers have been waiting for samsung to reveal a foldable phone since it teased one at CES 2013 by showing off a flexible OLED display. since then the concept of a folding phone has met criticism from those seeing it as ‘gimmicky’ although that hasn’t stopped other companies from jumping on the bandwagon. there are several companies rumoured to be working on their own foldable handsets including LG, huawei, and apple. earlier this week american tech company royole beat samsung to the punch by revealing its own folding phone. whats more google were actually on hand at samsung’s unveiling to announce support for folding displays which confirms reason to believe multiple manufacturers are working on a similar concept.

‘this isn’t just a concept,’ says denison, SVP of mobile product marketing at samsung. ‘the breakthroughs we’ve made in display materials have been matched by breakthroughs in manufacturing. as a result, we’ll be ready to start mass production in the coming months.‘