may 19th at 4:55 EDT marks the first time in history that a private company attempts to send a cargo craft to the international space station above: test launch of the spaceX ‘falcon 9’ on december 8th, 2010, in preparation for the mission

saturday morning, may 19th, 2012, marks the first time in history that a private corporation attempts to deliver cargo to the international space station (ISS), a mission thus far achieved only by three government-launched crafts.

at 4:55AM EDT at the NASA cape canaveral air force station in florida, spaceX will use its ‘falcon 9‘ rockets to launch the ‘dragon‘ spacecraft, which if successful will arrive at the ISS five days later. ‘dragon’ is expected to remain docked at the station for two weeks, before being released back to earth and collected from the pacific ocean.

UPDATE (5/19): high pressure readings in the combustion chamber on engine five of the ‘falcon 9’ led NASA to cancel the launch one-half second prior to liftoff. a second attempt is anticipated for as early as tuesday, may 22nd. UPDATE (5/22): at 3:44 AM EDT, the spaceX ‘falcon 9’ successfully lifted off with ‘dragon’. within ten minutes the craft had reached orbit, and deployed its solar panels.

animated simulation of the launch and mission

the voyage marks the second flight of the spaceX ‘dragon’ craft, which was first tested in december 2010 to prove the ability of launching, orbiting, and recovering the unit. onboard is 1014 pounds (460kg) of supplies: over 160 meals, a set of ice bricks and nanoracks modules for experimentation, cargo bags, and laptops and power cords. researchers on the ISS will collect these materials, and refill ‘dragon’ with return cargo. 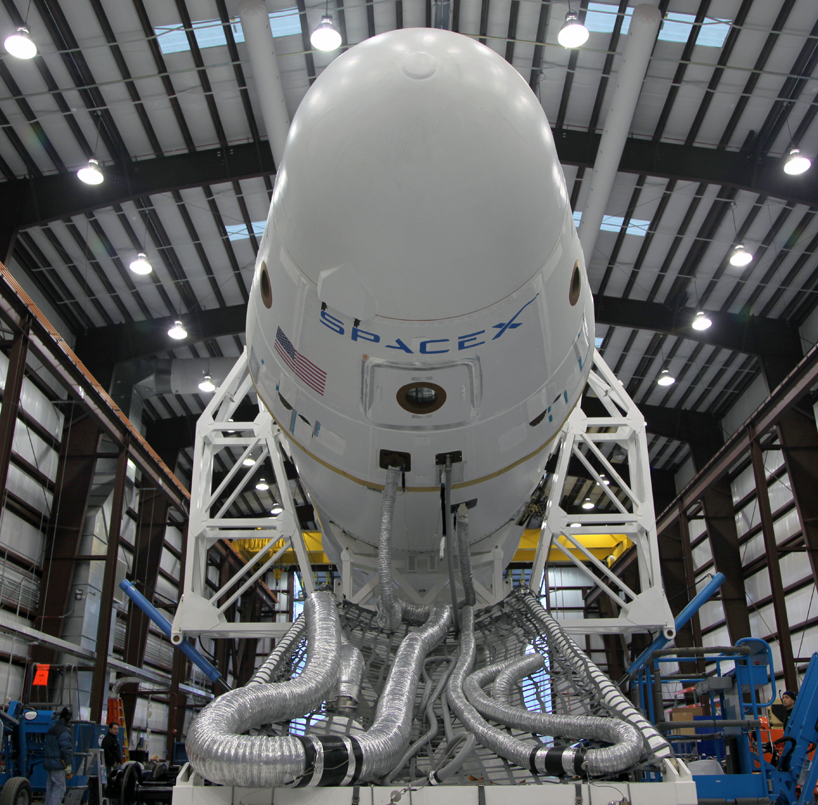 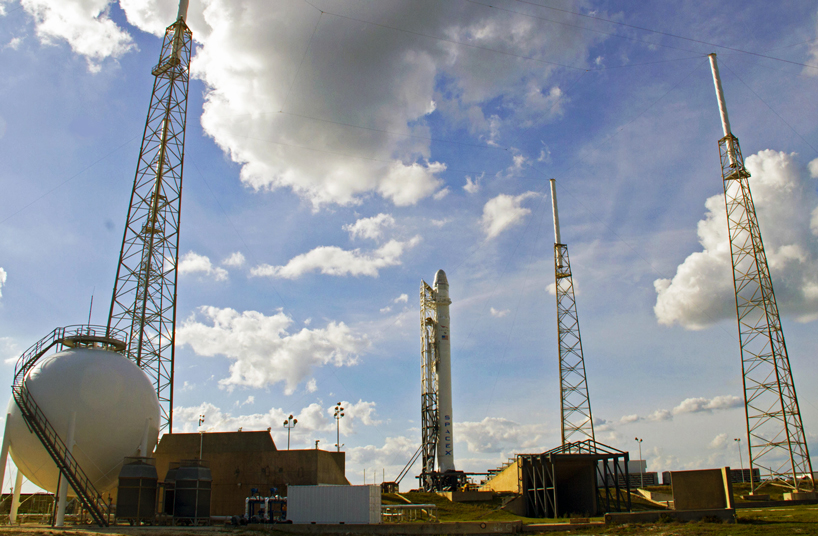 the spacecraft is already in place for the launch at cape canaveral, florida image © NASA / cory huston

‘dragon’ is 14.4 feet tall by 12 feet in diameter (4.4 x 3.66 m HD), measuring 54 feet (16.5 m) with its two, 8-panel solar array wings fully extended. it contains the most powerful heat shield yet produced, composed of PICA-X (a high performance variation of NASA’s phenolic impregnated carbon ablator). like the space station, it will complete an orbit of the earth once every 90 minutes.

the craft is designed to successfully separate from its rocket launchers, calculate whether it can berth with the space station, permits its capture by the ISS’s robotic arm, and ultimately detach from the station, returning to earth and landing softly via parachutes into the pacific ocean.

while this mission contains only cargo onboard, ‘dragon’ can also be configured to hold a combination of cargo and flight crew. 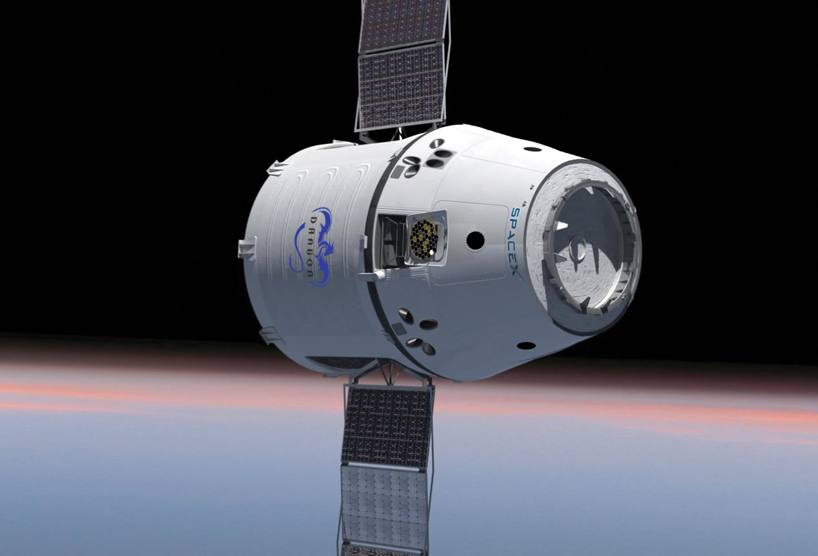 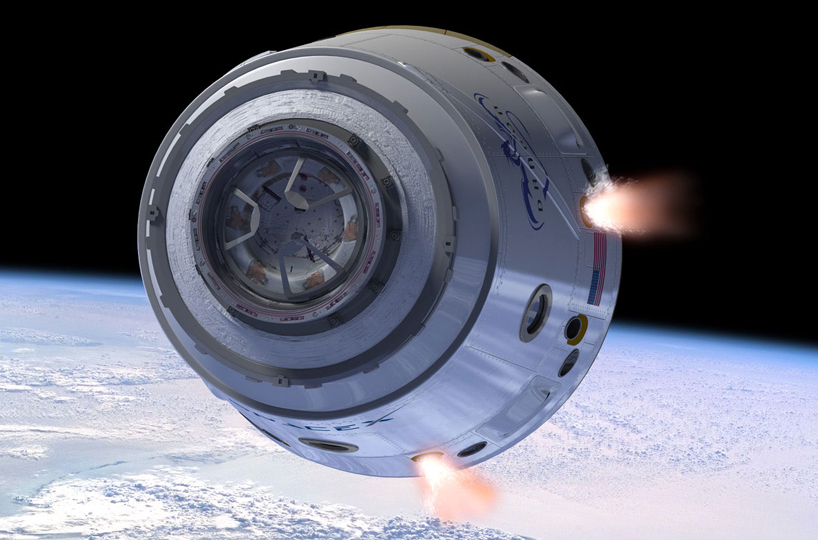 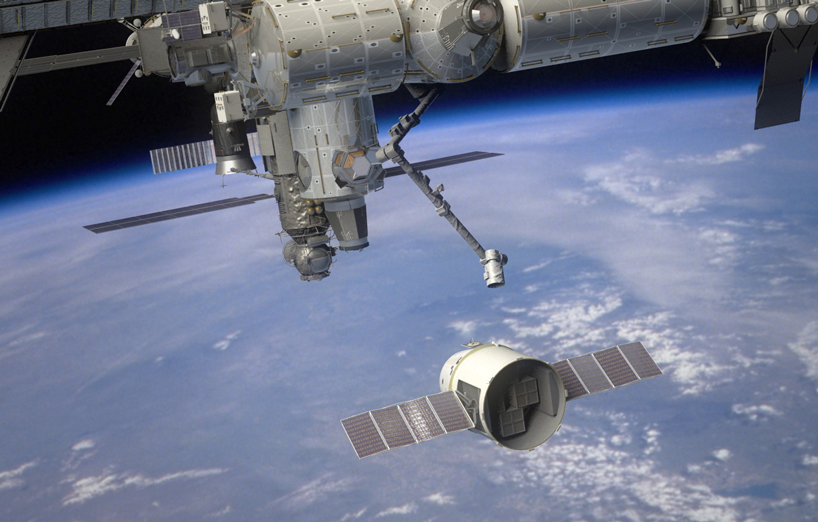 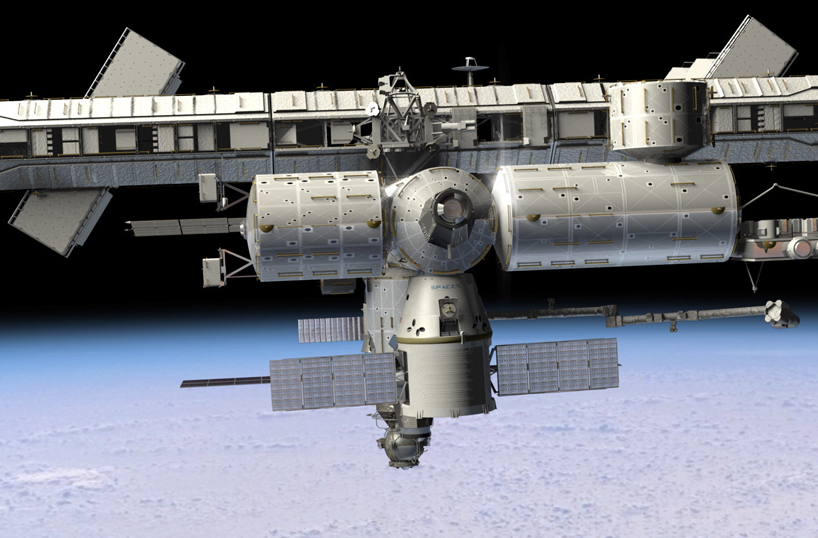 rendering of ‘dragon’ berthed to the ISS