on tuesday, may 22nd, 2012, the spaceX ‘falcon 9’ successfully lifted off from the NASA cape canaveral air force station, carrying the ‘dragon’ spacecraft loaded with cargo for the international space station. as both crafts orbited at 17,000 miles per hour, ‘dragon’ successfully docked on friday, may 25th, and the crew began unloading cargo the next morning (you can find designboom’s early reportage of the mission, and details about ‘dragon’, at ‘spaceX dragon launch‘).

dutch astronaut andré kuipers– who joined don pettit as the two ISS crewmembers responsible for docking ‘dragon’– photographed the capture, docking, and unloading of ‘dragon’. he reflects in his blog: ‘the ‘dragon’ mission is the operational highlight of my mission. but it is also a milestone for international spaceflight. this is the first time that a commercial spacecraft has flown to the ISS and docked with the station. you could say a new era of spaceflight has begun. soon private companies will take people to and from space.‘ (via gizmodo)

the ‘dragon’ will undock from the ISS on thursday, may 31st. it is then expected to re-enter the earth’s atmosphere, splashing down via parachute in the pacific ocean off of southern california.

NASA coverage of the ‘dragon’ berthing to the ISS

as designboom reported, onboard the ‘dragon’ was 1014 pounds (460kg) of supplies: over 160 meals, a set of ice bricks and nanoracks modules for experimentation, cargo bags, and laptops and power cords. in addition, 15 student-designed experiments represent ‘aquarius’, the first mission of the ‘student spaceflight experiments program’. researchers on the ISS will collect all of these materials, and refill ‘dragon’ with return cargo.

on the ‘falcon 9’ rocket boosters there was a more unexpected set of cargo: the cremated remains of 308 individuals, including those of actor james doohan, who played scotty on the television series ‘star trek’. as planned, the ‘falcon 9’ separated from ‘dragon’ nine minutes and 49 seconds into flight and it is now orbiting above the earth, anticipated to re-enter the earth’s atmosphere in about a year, burning up upon re-entry. 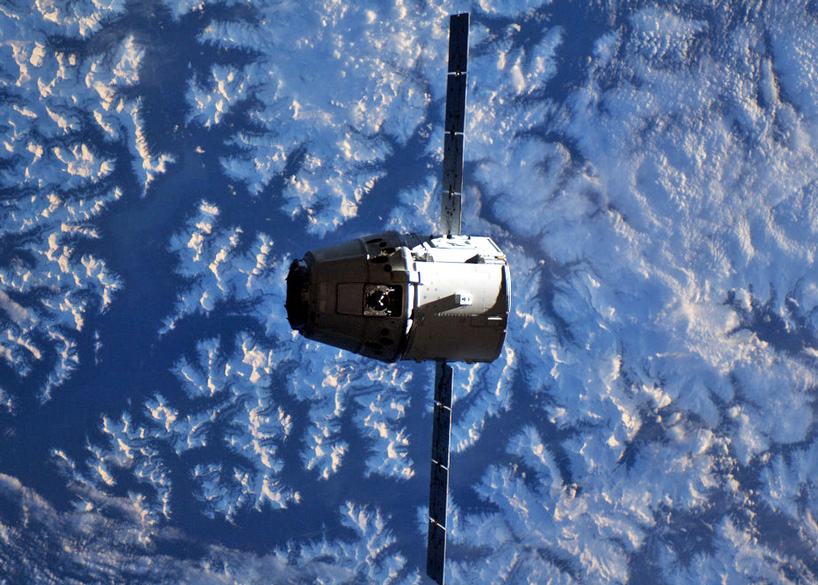 before docking, ‘dragon’ performs flight controls and tests within view of the ISS, here above the rocky mountains in america 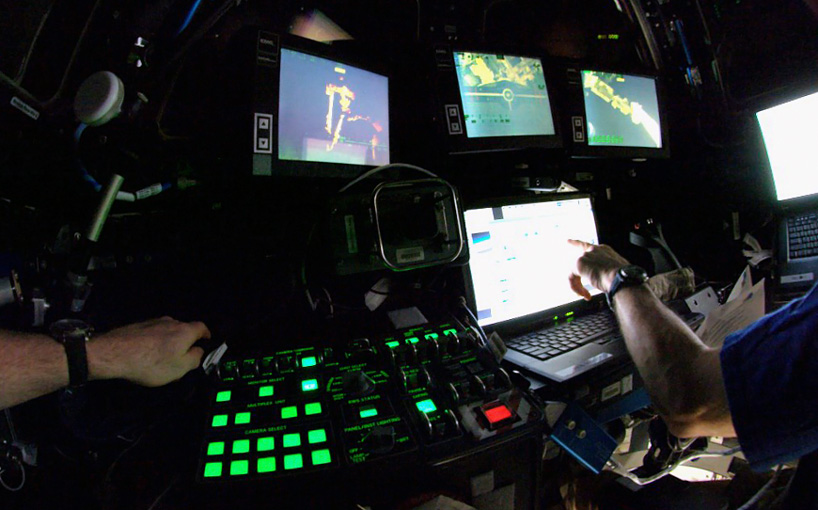 from inside the space station’s cupola, flight engineers don pettit and andré kuipers guide the ISS’s robotic arm to capture the ‘dragon’ 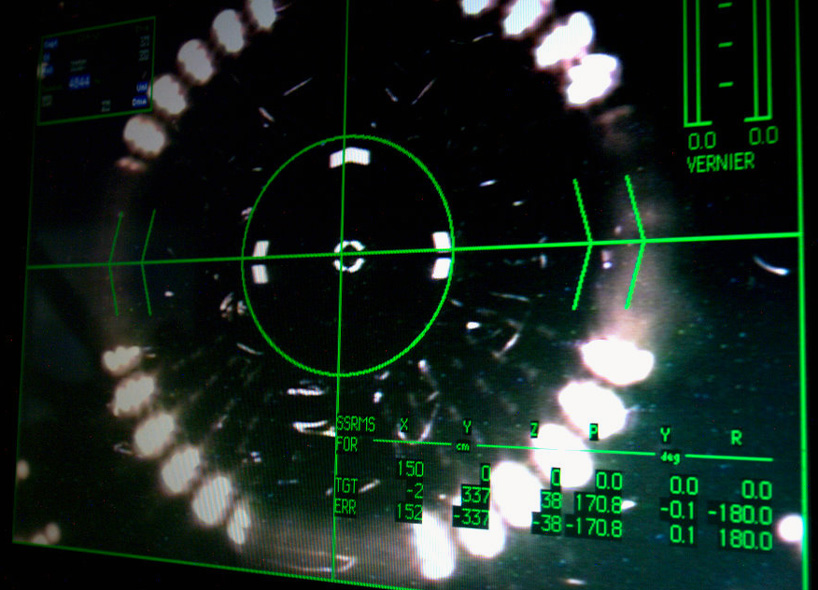 zooming in to guide the canadarm to meet ‘dragon’ 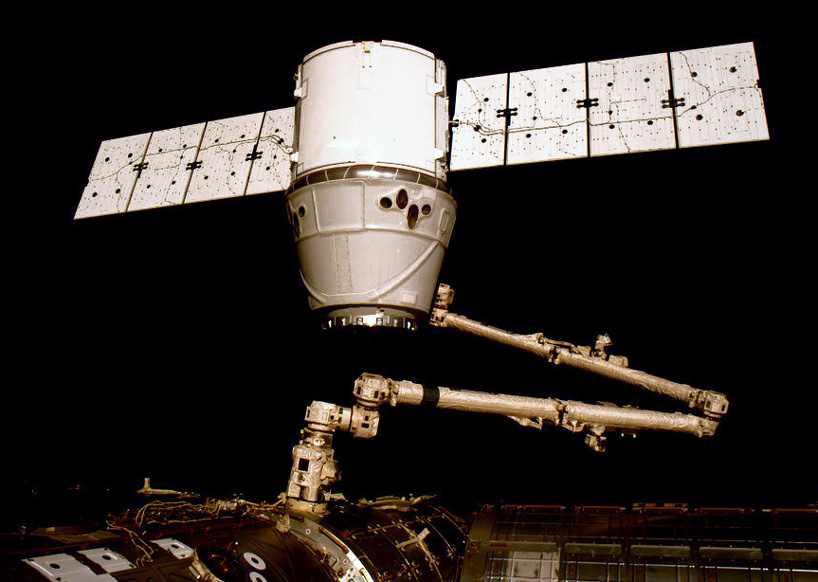 the robotic arm brings in ‘dragon’ to meet the ISS 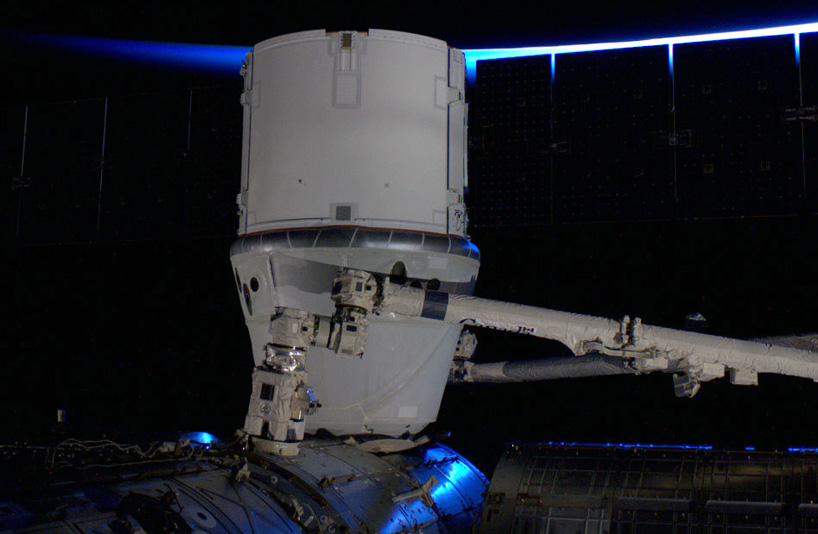 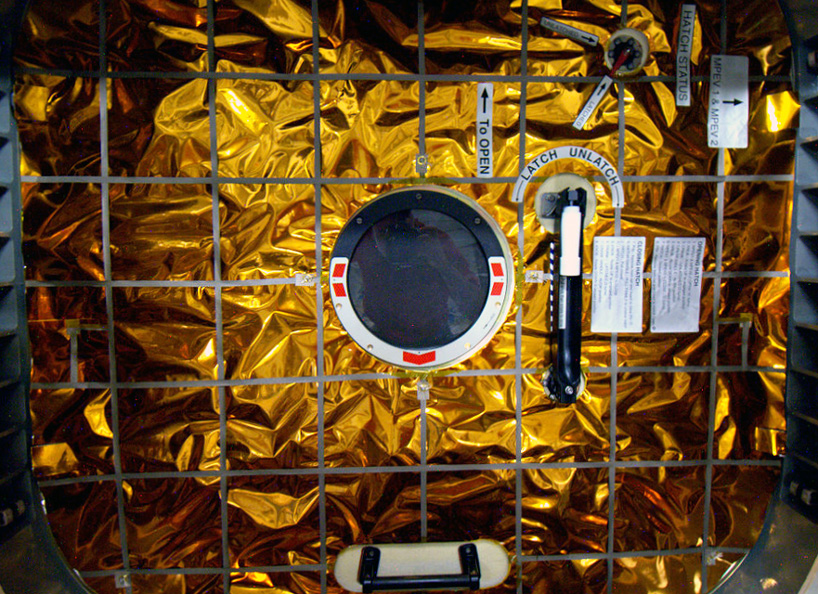 entry hatch to the ‘dragon’