the first t. rex skeleton was placed in the hall of saurischian dinosaurs in the american museum of natural history over a hundred years ago, and the excitement of that first discovery has given way to countless more — more skeletons, more fossilized fecal research, more paleontological finds that point to very unexpected things about the apex predator of earth’s known history. they probably sported feathers on their heads and tails for warmth and camouflage; they were born the size of a skinny turkey; their arms weren’t always tiny; they may or may not have been cannibals — and we’re just getting started.

tons of little-known facts about t. rex are out on the table now, and on march 11, 2019, the american museum of natural history invites you to not just memorize these feathery facts, but to truly see them for yourself — by studying the latest in t. rex history via the latest virtual reality technologies.

t. rex grew from a fluffy juvenile to a 9-ton mega-predator by gaining 1,700 pounds a year
gif by AMNH/r. peterson / © AMNH

for starters, you might refresh yourself on the skeleton that started it all, barnum brown’s first discovery in 1902. at the american museum of natural history’s t. rex: the ultimate predator exhibition, visitors can strap into an VR headset with up to two other friends and virtually ‘rebuild’ barnum’s t. rex from scratch. the virtual component t. rex: skeleton crew has been created in collaboration with HTC VIVE, a virtual reality headset developed by consumer electronics company HTC. ‘through VR, visitors can engage with the subject of the exhibition in an exciting, in-depth way that enriches their knowledge and leaves a lasting memory for years to come,’ said victoria chang, director of HTC VIVE arts. (see a preview of the exhibit on designboom here.)

when was the last time you tried VR? two or three years ago? with a cardboard headset? it’s advanced a lot, and so has the perception of the t. rex. 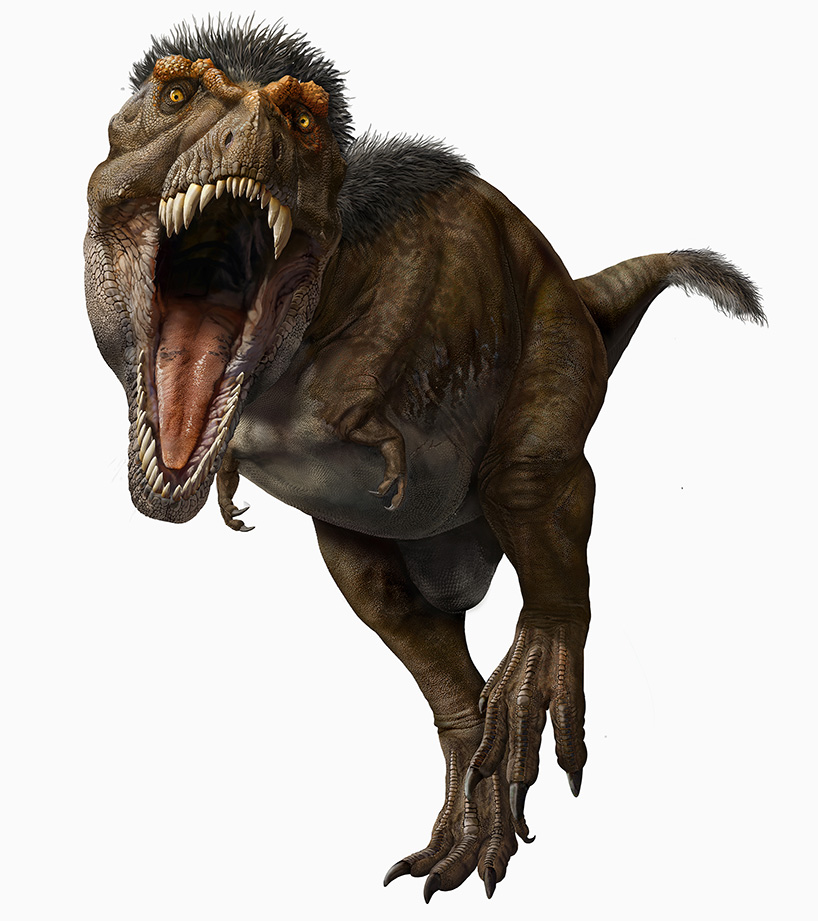 the exhibit introduces viewers to the entire tyrannosaur family through fossils, casts, engaging interactives, VR, and life-sized models, including the most scientifically accurate representation of t. rex to date. really, the exhibition is an informative love letter to the misunderstood predator that captured our hearts. 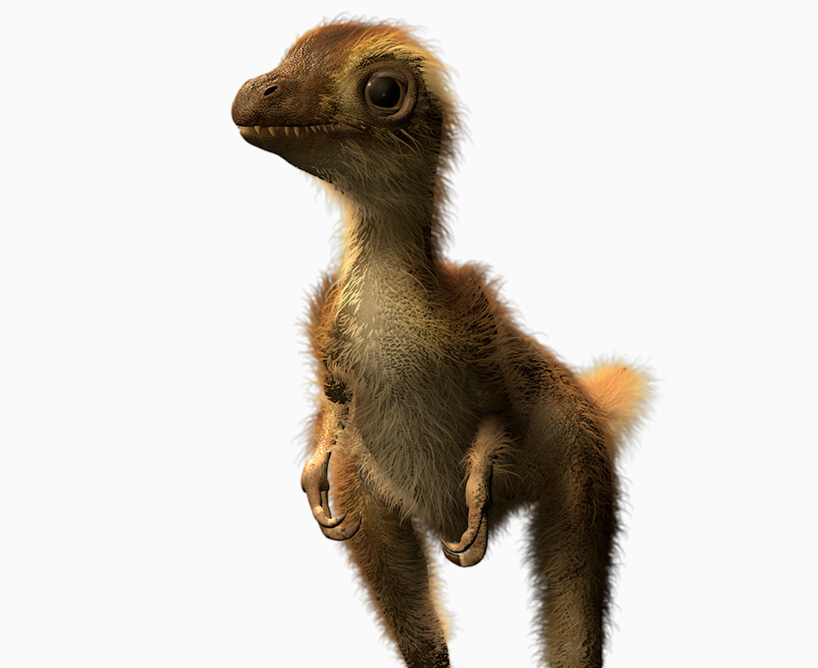 we usually think of t. rex as a monstrous killing machine, not a defenseless hatchling
image by AMNH/r. peterson / © AMNH

viewers will gawk at the base of a massive life-sized t. rex model sporting patches of feathers — this is the latest and definitive representation of the prehistoric predator. it’s now known to have evolved from a much smaller, more agile, feathered family tree. it’s a much easier connection to draw when staring down t. rex hatchlings, or a four year old juvenile t. rex. feathered, defenseless, almost adorable — it’s also hypothesized that half of them died before they could mature. 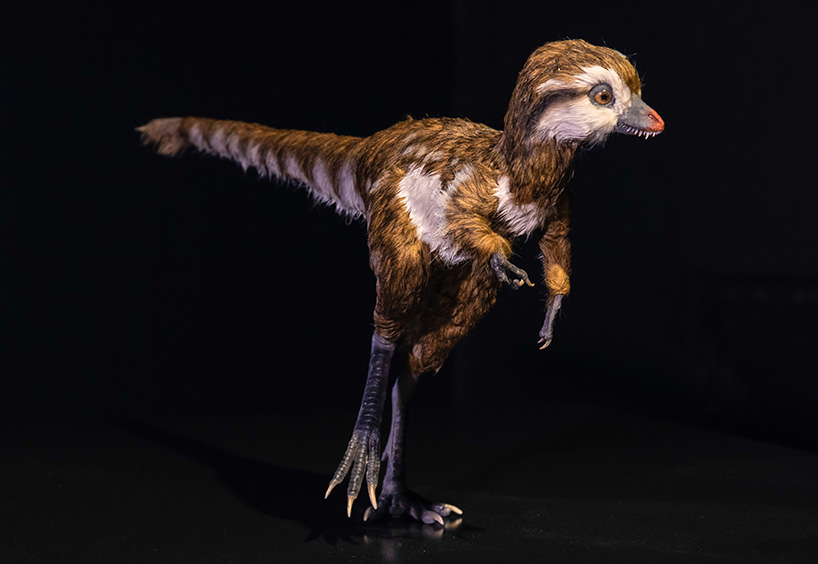 every t. rex was once a vulnerable youngster — and most never made it past age one
image © AMNH/d. finnin

‘dinosaurs, and tyrannosaurus rex in particular, are such an important and iconic part of the museum and have been throughout our history,’ said ellen v. futter, president of AMNH. ‘so it seems fitting to launch the museum’s 150th anniversary celebrations with a major new exhibition on the ever-intriguing king of dinosaurs. this exciting and fascinating exhibition will do what the museum has done throughout its history and continues to do today: share the latest scientific breakthroughs with the public, introduce visitors to the researchers on the cutting-edge of discovery, shed new light on the great story of life on earth, and inspire wonder and curiosity in visitors of all ages.’ 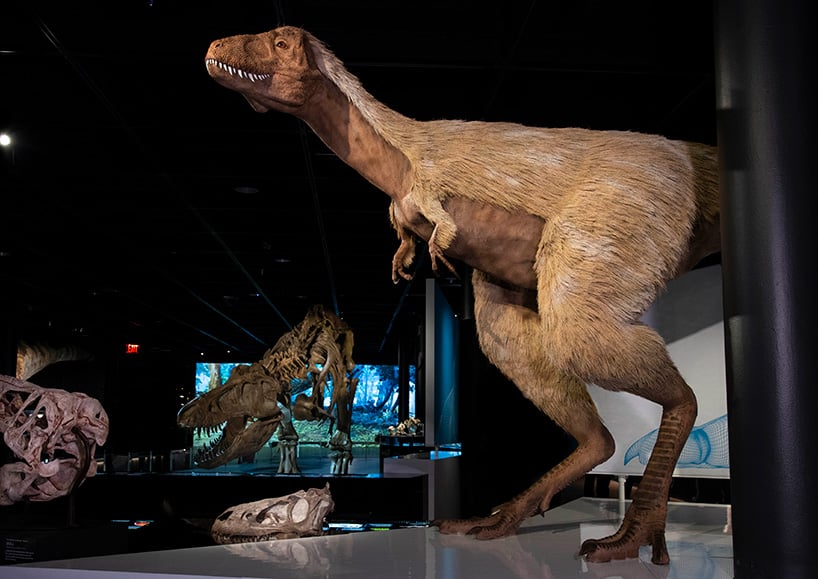 although not yet the tyrant ‘king,’ a four-year-old t. rex would have weighed about five times more than a four-year-old boy and was as large as any other predatory dinosaur in its habitat
image © AMNH/d. finnin

curated by mark norell, t. rex: the ultimate predator seems as grand of an exhibition as the t. rex itself, but after exploring fossils, shadow theaters, traditional models, the life cycle of a t. rex, its family tree and more, you begin to realize that we’ve still just begun to scratch the surface on this prehistoric family. thankfully among all those fascinated by the t. rex, we have the dedicated few willing to spend their lives uncovering the truth.

below, we round up a few more fascinating facts about these famous mega-predators: 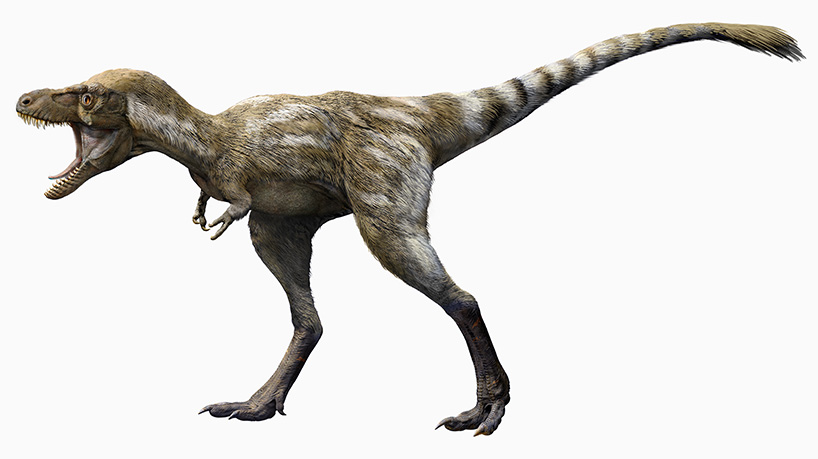 fully covered in feathers for warmth and camouflage, juvenile t. rex had relatively long arms (unlike its adult counterparts), a slim body, and bladelike teeth that could cut through flesh but were not yet capable of crushing bone
illustration by zhao chuang; courtesy of PNSO

– t. rex ate members of its own species, but it is not yet clear whether they killed each other or ate the deceased.

– a t. rex could bite with about 7,800 pounds of force —equivalent to the weight of three cars. no other known animal can bite with such force. 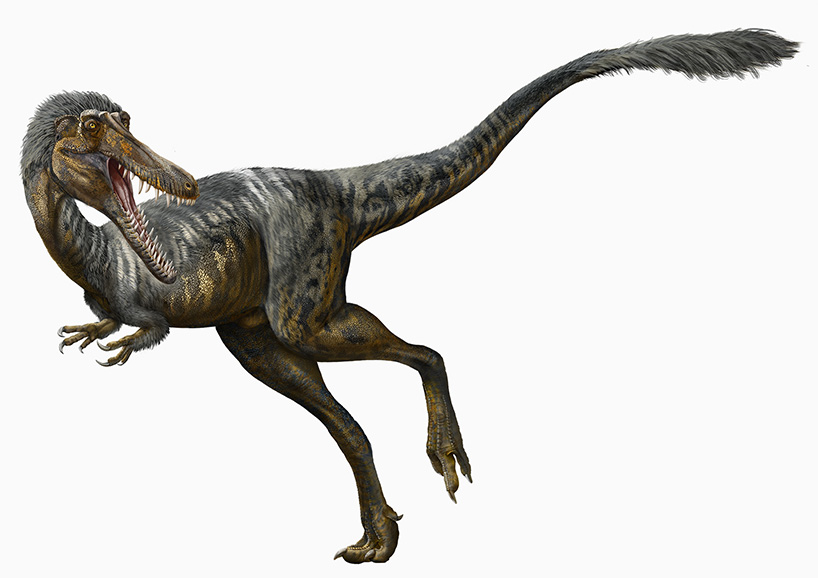 xiongguanlong baimoensis offers a rare glimpse of a mid-sized, transitional species between the smaller early tyrannosaurs and the later giants
illustration by zhao chuang; courtesy of PNSO

– to go from turkey to slaughterhouse five, a juvenile t. rex put on 1,700 pounds per year until it reached its full grown weight — 6 to 9 tons.

– t. rex is famous for its tiny arms, but earlier tyrannosaurs had arms long enough to grasp prey or pull food into their mouths. 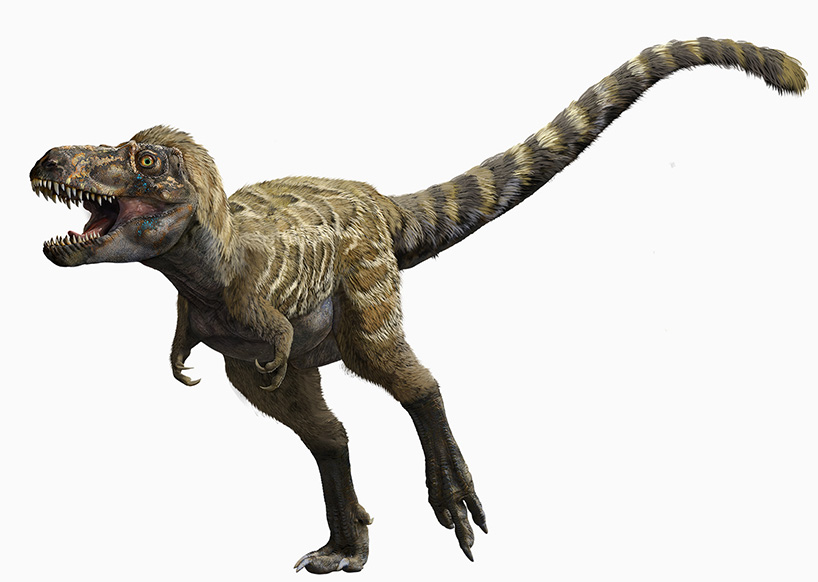 is this dinosaur a small adult tyrannosaur named nanotyrannus? or is it just a young t. rex? scientists disagree — and there are good arguments for both sides.
illustration by zhao chuang; courtesy of PNSO

– t. rex adults could not technically run, because at least one leg had to stay on the ground at all times. but thanks to its long stride, they could probably amble faster than most people can run, with a top speed between 10 and 25 miles an hour (16 to 40 kph). 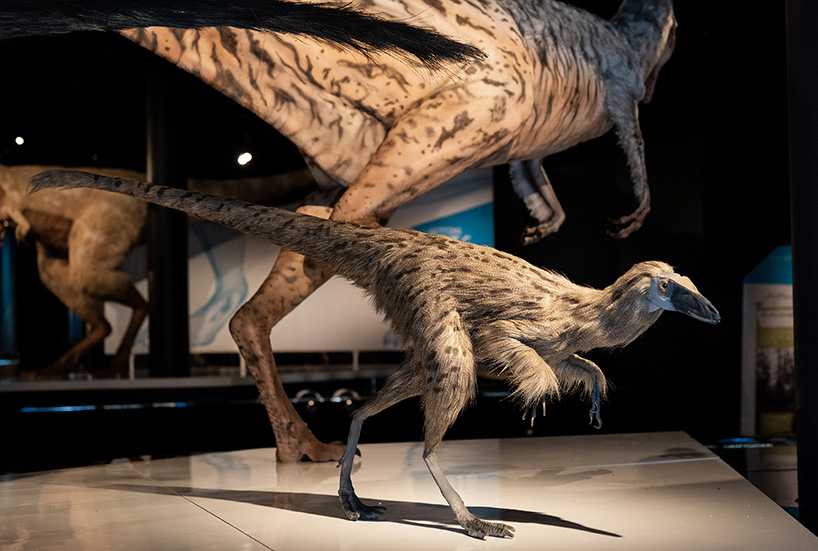 dilong paradoxus evolved about 40 million years after the earliest known tyrannosaur. like many early tyrannosaurs, its arms were relatively long, and capable of seizing small prey. dilong was the first tyrannosaur found with fossilized feathers. but scientists now think that feathers were present throughout the tyrannosaur family — and in fact date back to the first dinosaur.
image © AMNH/d. finnin