a car in space, high-speed hyperloops, humpteen rocket launches – as if there wasn’t enough keeping the buzz around tesla alive. the california-based automaker has released an action-packed video encapsulating the brand’s somewhat impressive innovations including a mystery car and new footage of the next-gen roadster in action.

the video which seems to feature all of tesla‘s product lines as well as the company’s production facilities, is the work of the company’s nifty videographers who produce these blockbuster commercials. from its design studio in hawthorne the mystery car in question is ‘revealed’ (check around 16 seconds). is this the first look at a model Y, clever marketing or an old prototype? whatever it is it’s surely hidden for good reason. viewers will also see the next-gen roadster in action with a matte black model driving through an empty hangar. the final shots show test riders experiencing the model 3 in full performance mode, with one’s final words summing up the commercial: ‘holy…’ 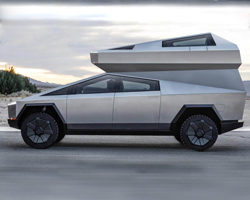