A team of engineers from MIT and the National Renewable Energy Laboratory (NREL) have moved one step closer to a fully decarbonized grid with the design of a highly efficient thermophotovoltaic (TPV) cell that converts heat to electricity with more than 40% efficiency.

For over 100 years, steam turbines have been used to obtain electricity from heat sources such as coal, natural gas, nuclear energy, and concentrated solar energy. However, steam turbines rely on moving parts that can’t operate after a certain temperature. While they can convert around 35% of a heat source into electricity, the machinery gets too hot after 2,000 °C (3,600 °F).

‘One of the advantages of solid-state energy converters are that they can operate at higher temperatures with lower maintenance costs because they have no moving parts. They just sit there and reliably generate electricity,’ says Asegun Henry, the Robert N. Noyce Career Development Professor in MIT’s Department of Mechanical Engineering.

Thermophotovoltaics work by converting heat to electricity via photons. ‘Much like solar cells, TPV cells could be made from semiconducting materials with a particular bandgap—the gap between a material’s valence band and its conduction band. If a photon with a high enough energy is absorbed by the material, it can kick an electron across the bandgap, where the electron can then conduct, and thereby generate electricity,’ explains the MIT News Office. 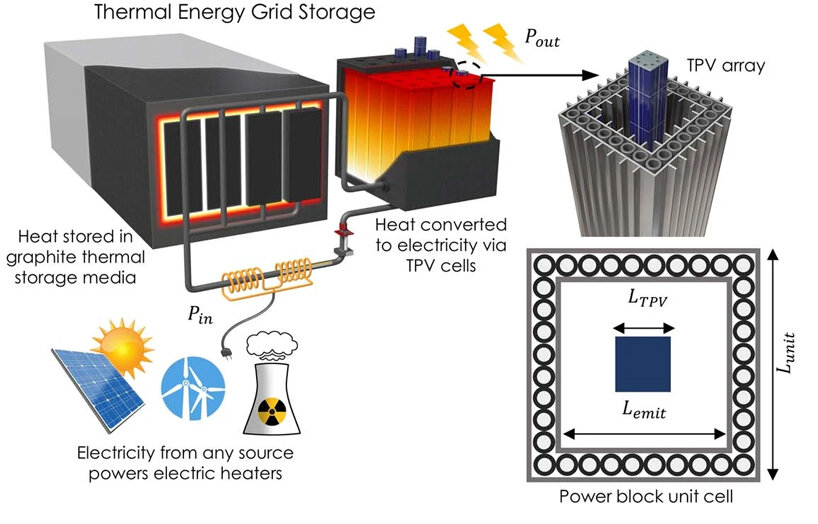 diagram showing how thermal energy could be stored, converted, and dispatched

The researchers want to scale up the thermophotovoltaic cell into a grid-scale thermal battery that would be used in conjunction with renewable energy sources such as solar. Excess energy on a sunny day would be stored in heavily insulated banks of hot graphite. The TPV cells would then convert the stored thermal energy into electricity on days when there’s no sun, enabling ‘dispatchable’ renewable energy.

‘Thermophotovoltaic cells were the last key step toward demonstrating that thermal batteries are a viable concept,’ continues Henry. ‘This is an absolutely critical step on the path to proliferate renewable energy and get to a fully decarbonized grid.’

To achieve this, the experimental TPV cell would need to be massively scaled up from one square centimeter to 930 sqm. However, Henry notes that the infrastructure to build cells on that scale already exists for making large-scale photovoltaic cells.

‘There’s definitely a huge net positive here in terms of sustainability,’ Henry adds. ‘The technology is safe, environmentally benign in its life cycle, and can have a tremendous impact on abating carbon dioxide emissions from electricity production.’

The research was published in online journal Nature. 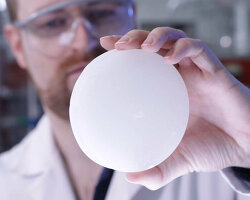 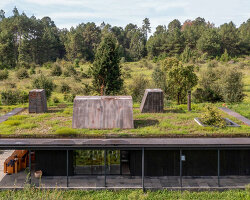