a custom motorcycle is a bike with stylistic, structural, or functional changes to the ‘standard’ mass-produced machines offered by the BMW’s and ducati’s of this world. since riders have been altering the aesthetics of their machines from the early days, the first ‘custom’ motorcycles broke onto the scene towards the late 1950’s, around the same time the term was applied to ‘custom’ cars. celebrating the speed that these bikes move in-and-out of garages, designboom has teamed up with bike EXIF to bring you march’s TOP five custom motorcycles. 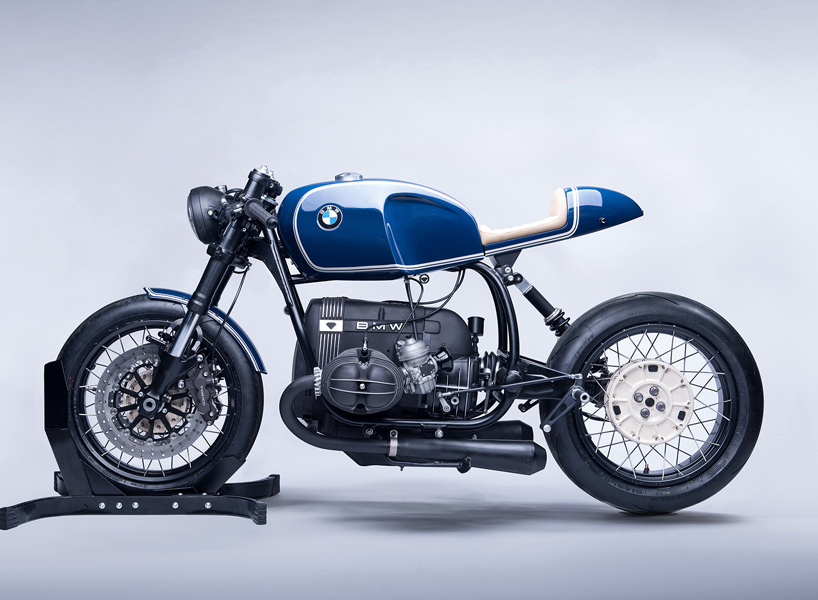 munich’s diamond atelier produces a limited production run of captivating BMW café racers called the ‘mark ii’ series. each ‘mark ii’ starts out as the classic ‘R-series’, then each bike is given new bodywork plus a whole host modifications. most notably, the workshop takes unique approach: rather than build everything from scratch for every individual bike, it has followed the process of designing and prototyping each individual part for production. the stunning ‘mark ii’ can be ordered in any personalized color, or livery, at the rider’s request. 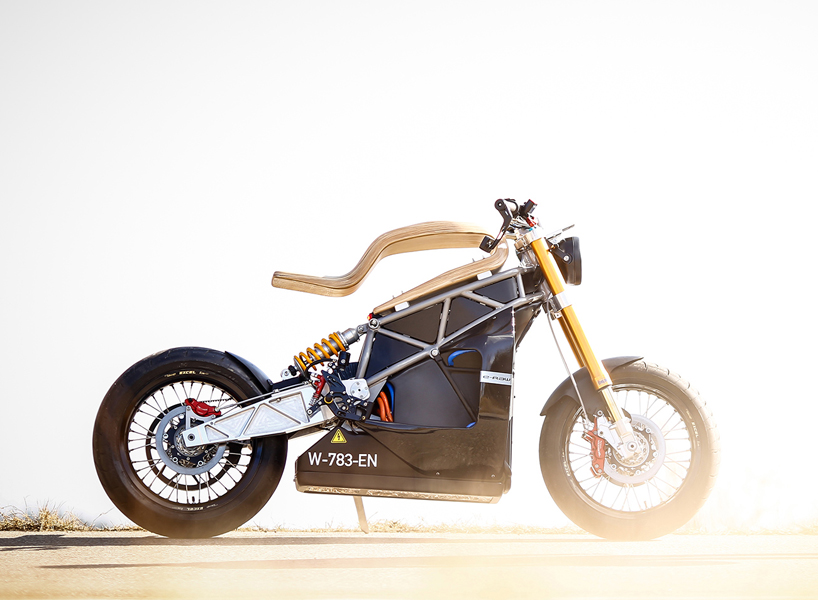 essence motorcycles founder martin hulin starting working on the ‘e-raw’ electric bike concept two years ago. since then, he has brought together a group of craftsmen, who fused the bike’s wood and metal together with an eco-friendly approach. his objective is to return to the ‘essence of motorcycling’, through simplicity and authenticity, keeping it raw, pure, and intense. its scultural wooden seat, made of plywood using traditional surfboard shaping techniques, outlines the silhouette of a traditional motorcycle while drawing attention to the complete absence of a fuel tank. 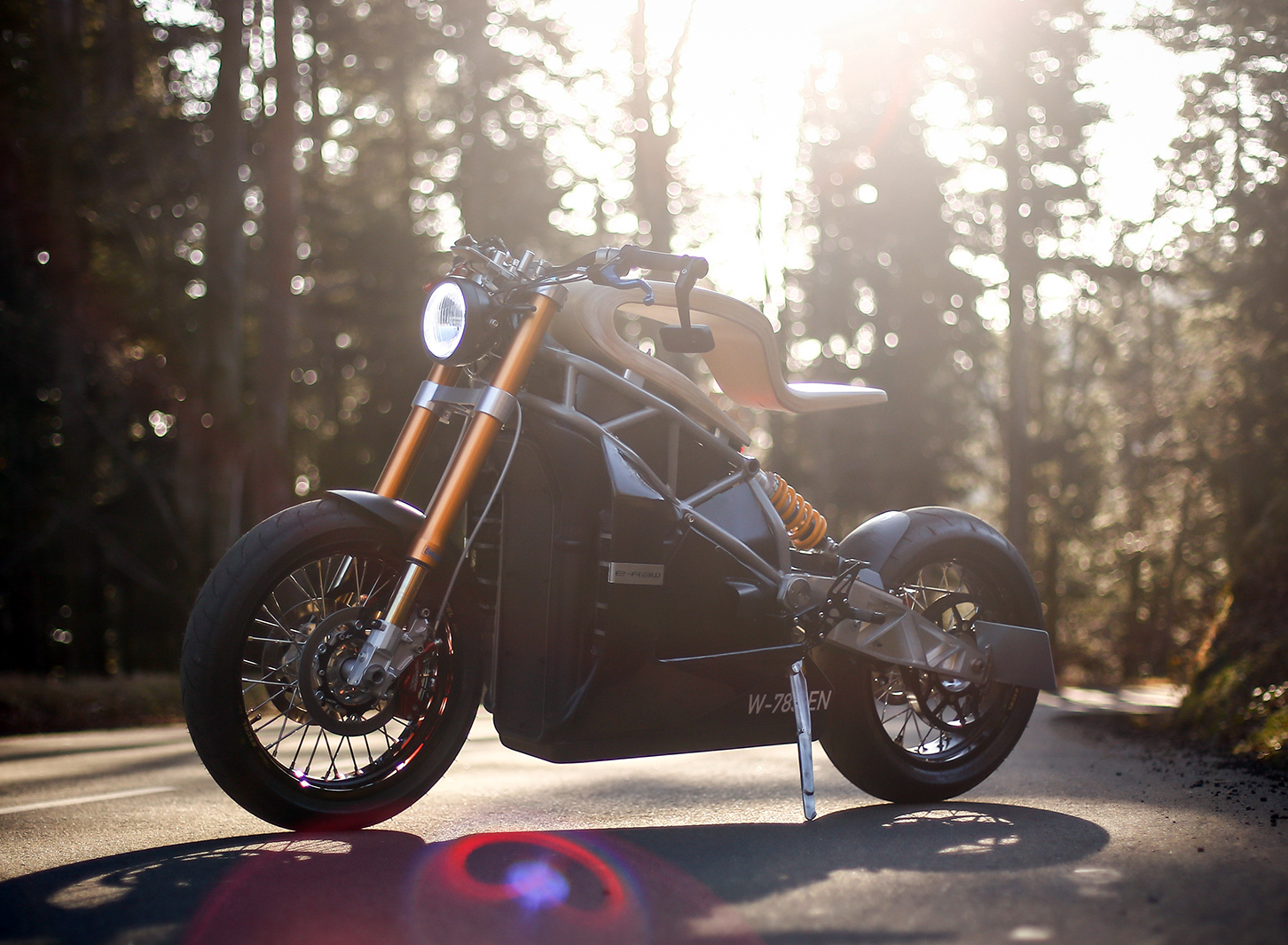 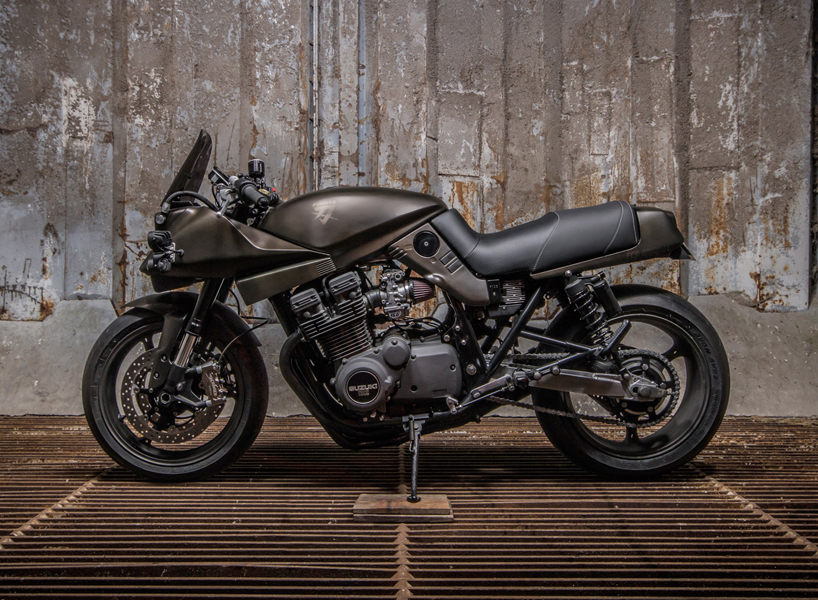 in the late 1970’s suzuki collaborated with hans muth, BMW’s former chief of styling, and his target design consultancy to create the ‘katana’. this custom model named ‘furiosa’ is the latest release from french motorcycle expert FCR original. the muscular angles and creases were the defining points of the original ‘katana’, and features a luxurious ‘dark bronze’ finish, with stealthy black paint on the engine. 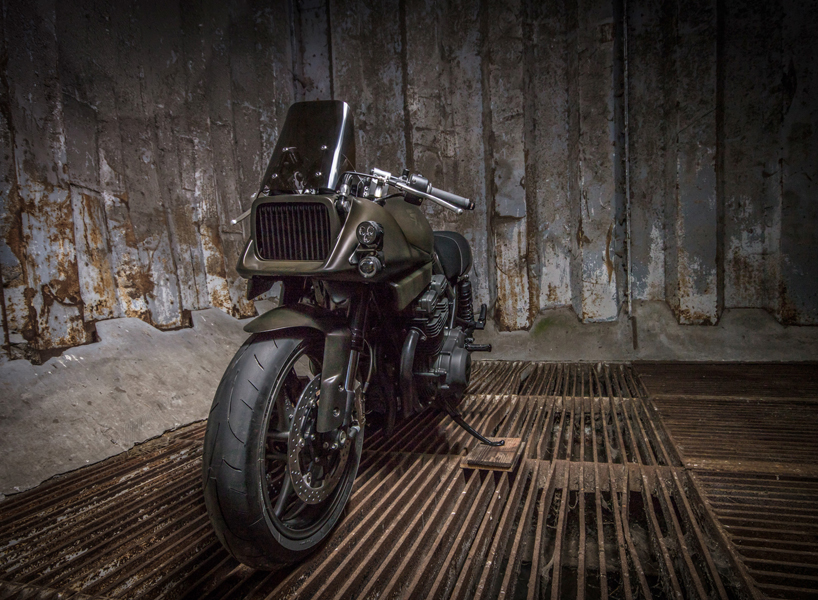 the transverse four-cylinder engine has been boosted out to 1166 cubic centimeters and has improved circulation from mikuni RS flat side carburettors. there are minor modifications to the tail section and rear subframe, while its comfortable seat is brand new and looks particularly plush considering modern-custom-standards. the rider is also treated to LSL handlebar clip-ons and daytona gauges, with discreet bar-end turn signals from motogadget. 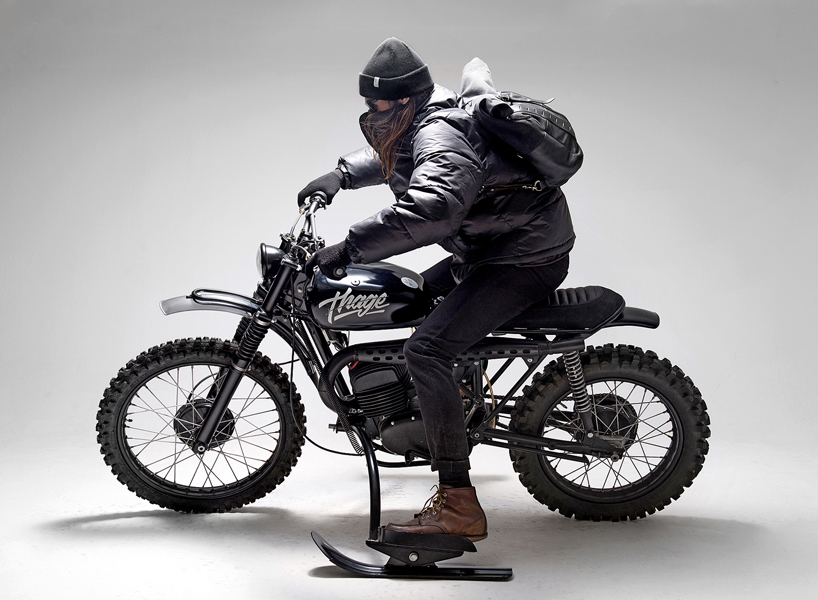 johan nordin of 6/5/4 motors got hold of something super-rare and quirky: the husqvarna ‘256’ — a bike developed in 1968 specifically for the swedish defence force, while just a thousand were manufactured and they were completely sold-out by the early 1980s.

he names the bike ‘thage’, after his father, ‘I built this bike because my dad had one when he did his compulsory military service in the early 1970s and I’ve heard a lot of great stories of his winter adventures on the little bike with skis. now I want to experience the same adventures.’ 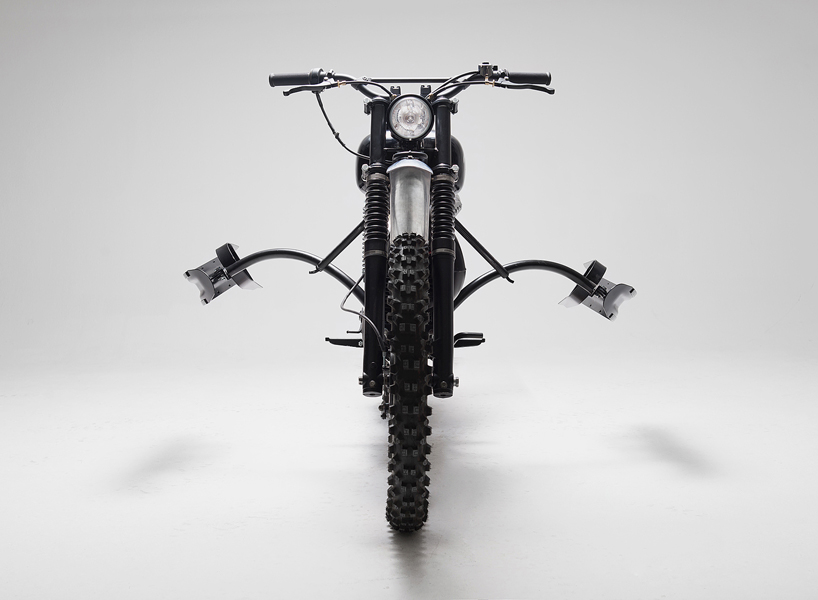 the ‘256’s’ two-stroke engine produces an impressive 15.4 horsepower, paired with a four-speed box. in true winter fashion it comes with a set of skis, however controlling them isn’t for the faint at heart: they automatically spring up if they are not pushed down by the rider’s feet, making gear changes tricky. to counteract this, 654 has attached a new lever that can be controlled by hand. the gear lever is located on the righthand side while the rear brake is on the left, allowing ski-riders to use the clutch with their left hand, and shift gears with their right. 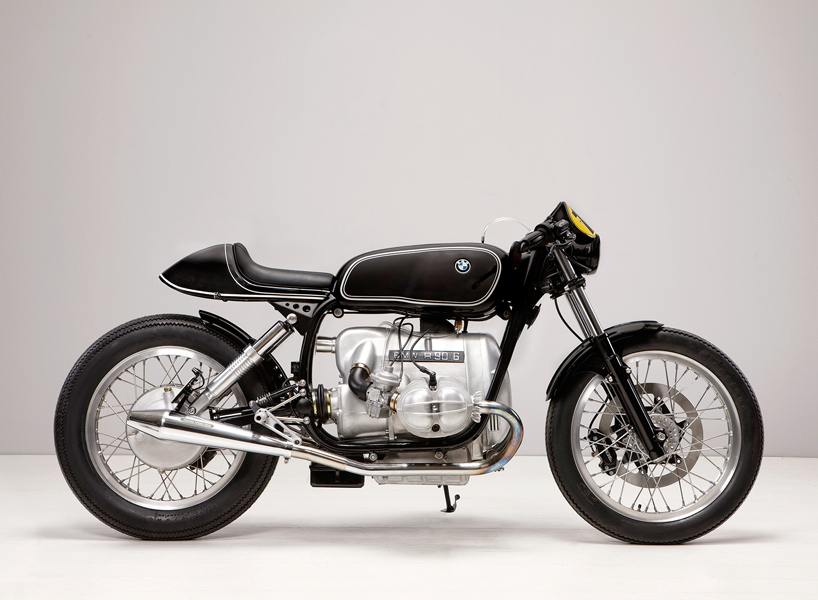 renard speedshop’s BMW ‘R90/6’ custom motorcycle is a striking build that combines a traditional figure with modern, sporty refinements. based upon the classic bavarian ‘R90/6′, it is now redressed in hand-made bodywork with a slick matte ‘black’ finish. created by andres uibomäe, owner of the estonia-based workshop, it now has the same minimalist stance, timeless finish, and performance capability that have grown to be signature of his company. 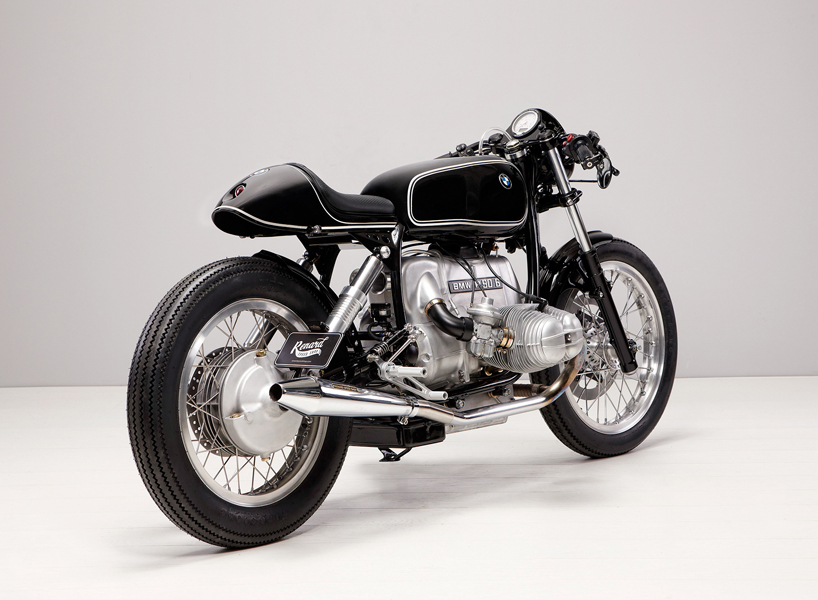 renard speedshop first received an original BMW ‘R 906′ in a good working condition, then stripped it back to the bare bones. it revives a fuel tank from a classic moto guzzi ‘V7′ special, stretching it into an elegant form. at the motorcycle’s rear, it refines the subframe to complement the low-profile tank. the rider’s seat pad is finished in black perforated leather.

this article is curated in collaboration with our friends at Bike EXIF, who are passionate about everything elegant on two wheels.