developed by disney research in collaboration with carnegie mellon university, ‘touché’ is an innovative system of touch recognition that can sense not only whether a user is touching an object but also in what way and with what body parts (s)he is doing so, using only a single wire and sensor.

the technology is based on ‘swept frequency capacitive sensing’ (‘SFCS’), which registers a range of capacitive signals, rather than relying on the binary ‘touch’ or ‘no touch’ categorization used by conventional touch displays. because different parts of the body have capacitive property ‘signatures’ based on the nature of their tissues, ‘touché’ can distinguish an elbow from a finger from a hand.

the research team notes that the system requires only a single wire to function, transmitting data to a processing system wirelessly via bluetooth. the system can also detect activity in water, by a sensor being placed underneath the tank, on tables, and even through the human body.

video demo of ‘touché’ and discussion of possible applications (beginning 2:50)

while disney research has no specific production plans for the technology, concept applications include an ‘on-body music player’, wherein a listener can control a digital music player by using touch gestures on his body: swiping a finger along one hand to jump between tracks, tapping on the wrist to pause, or other similar activity.

a ‘smart doorknob’ could connect with an LED screen to display status messages or automatically set locking behaviour to the room. for example, touching the doorknob from the inside could set a ‘do not disturb’ message; closing it lightly with one finger could display ‘be back in 5 minutes’; while a full, grasped close would register that the occupant is leaving for the night, displaying the relevant message and automatically turning off the room lights and locking the door.

in an ‘internet of things’ conceptual smart home, the ‘touché’ technology could be built into a couch. when a user sits down, the television automatically turns on; when he relaxes back, the lights dim; and should he fall asleep, the television and lights are turned off. 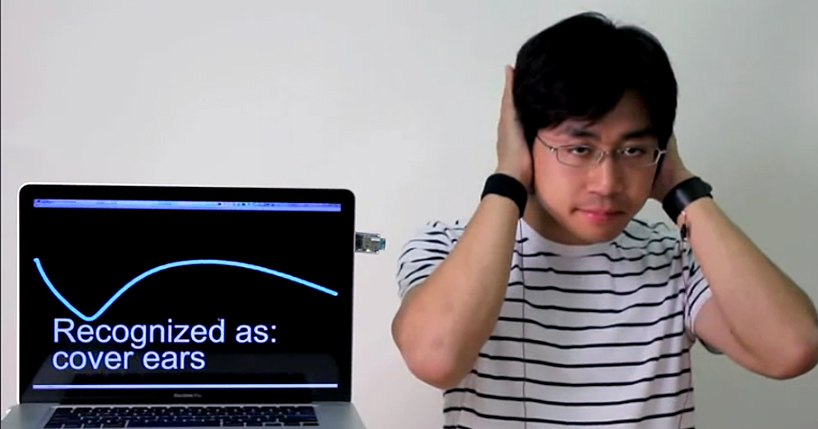 the coloured lines on the monitor illustrate the capacitive range, while the text ‘identifies’ the current condition 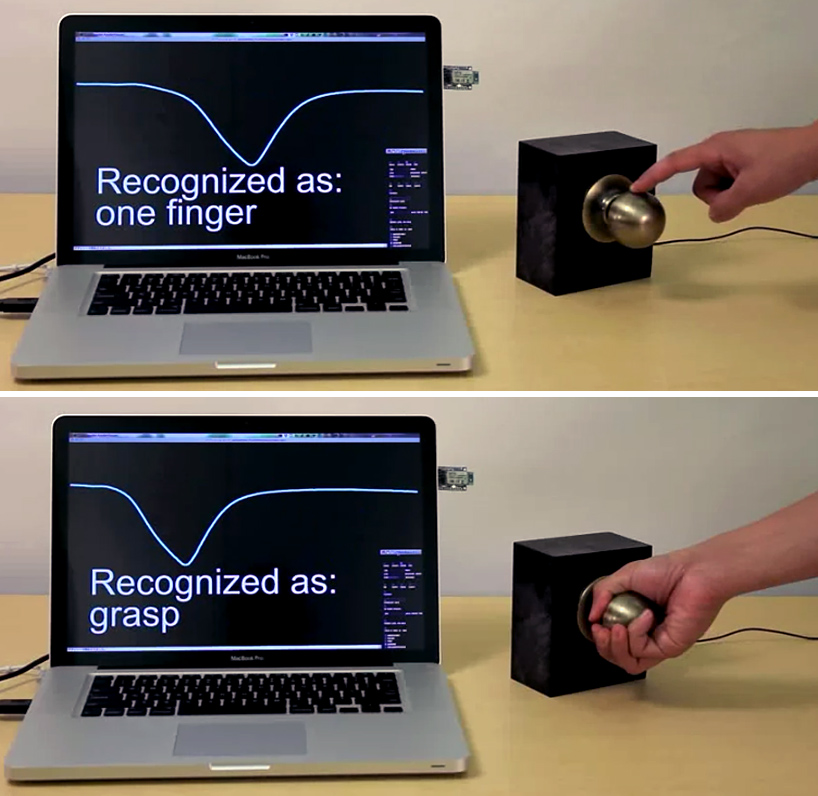 the system can be used on any conductive surface: metals (as in the doorknobs above), wood, water, or the human body; one possible application could be a ‘smart doorknob’ that posts status updates and adjusts lighting and locking mechanisms based on the way a user opens or closes a door