toyota FT-4X concept – or, ‘future toyota’ – four-wheel drive crossover – is a four-wheel drive toolbox drafted by the japanese-automaker’s calty design research inc. in newport beach, california. with its long list of unique functionalities and rugged charm in a compact design, this concept is made for quick escapes. 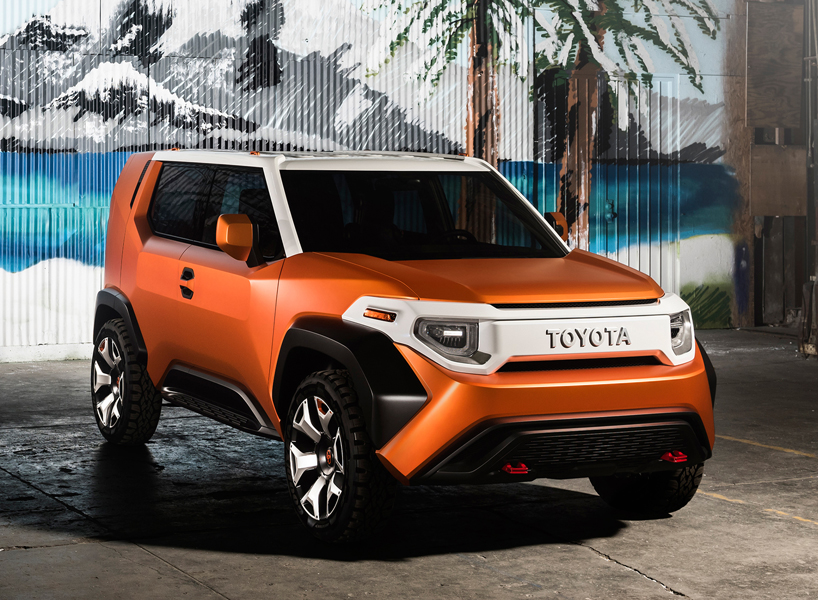 toyota believes that generation Y (millennials) are fond of the outdoors, but operate almost always indoors. they enjoy venturing into to new neighborhoods and exploring national parks, with minimal forward planning. their countless interactions on social media bring inspiration. it is the busyness of their nonstop daily lives that pushes them past the precipice of ‘liking’ a social media post into the realm of creating their own, in reality. quick escapes are becoming the social normal, and the japanese-automaker’s ‘FT-4X’ aims to cater for all needs during these adventures. 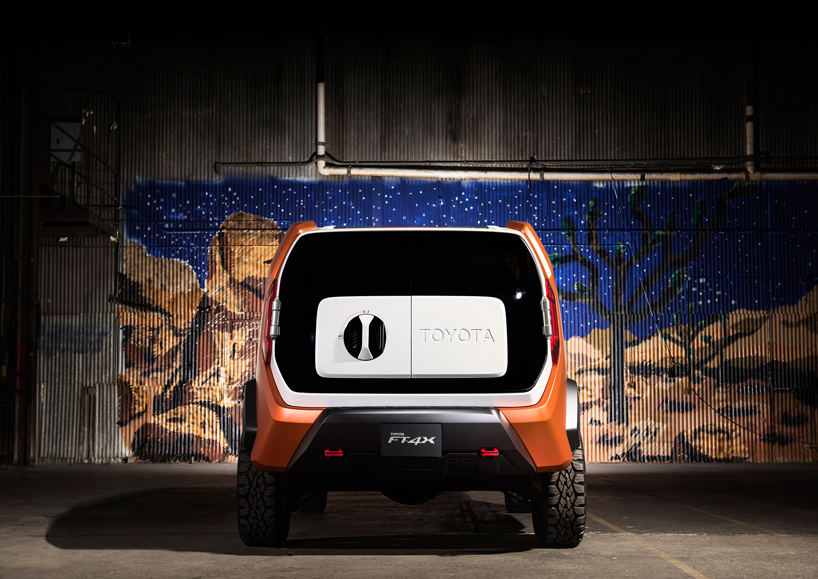 in this knowledge, the calty design studio fostered a ‘rugged charm’ ethos when creating the concept. ‘rugged charm’ places value on simplicity, capability, durability, and toyota lineage. it also takes into account compact, sturdy dimensions, and a charming ubiquitous tactility of grips, handles, and controls (the notion of feeling a satisfying mechanical reaction to a user’s input). 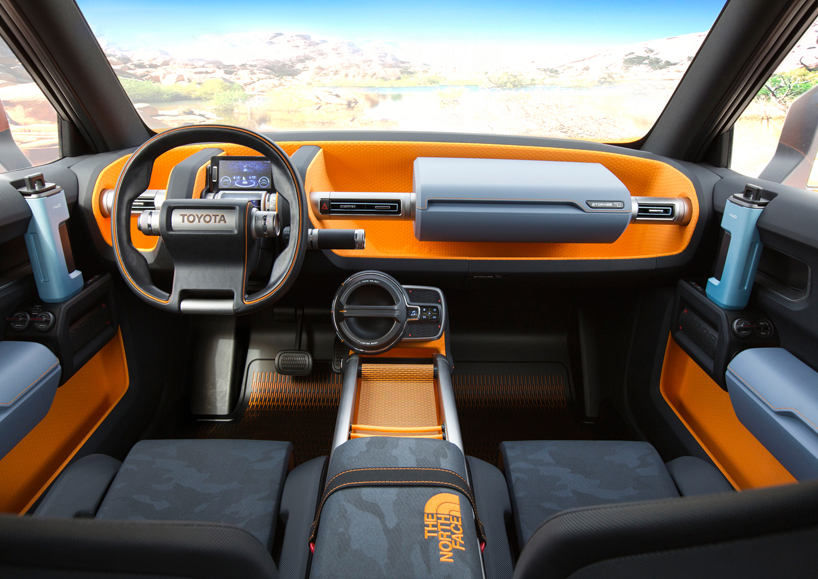 designers took a reverse approach to the vehicle’s design. rather than begin their styling processes at the nose or profile, they began at the rear. during their months’ long research, they noticed that basecamp for gen Y explorers was oftentimes the destination itself: cherished experiences were had in and around this basecamp, usually at their vehicle’s tailgate, or hatch. 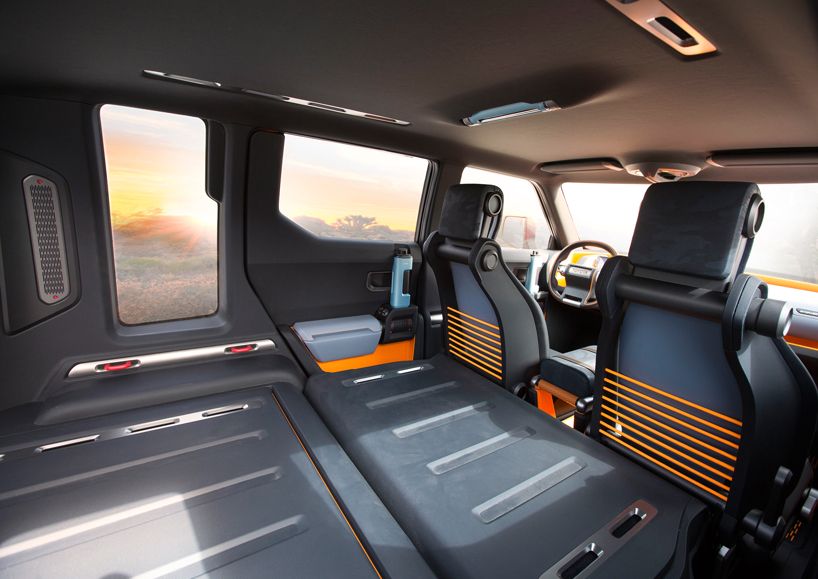 compact, durable outdoor activity gear inspired the FT-4X’s’ expressive looks. for its exterior, stylists imbued an ‘X’ theme throughout the architecture c-platform. at the center of a vertical X (which bows outward) is a door handle, or, in essence, the widest part of ft-4x (71.7 in.). this places the broadest area near the driver and passenger, creating a natural protective zone. at the rear, the bowed vertical x can be seen at the rear hatch, again placing the door handle at the center and creating a protective space. 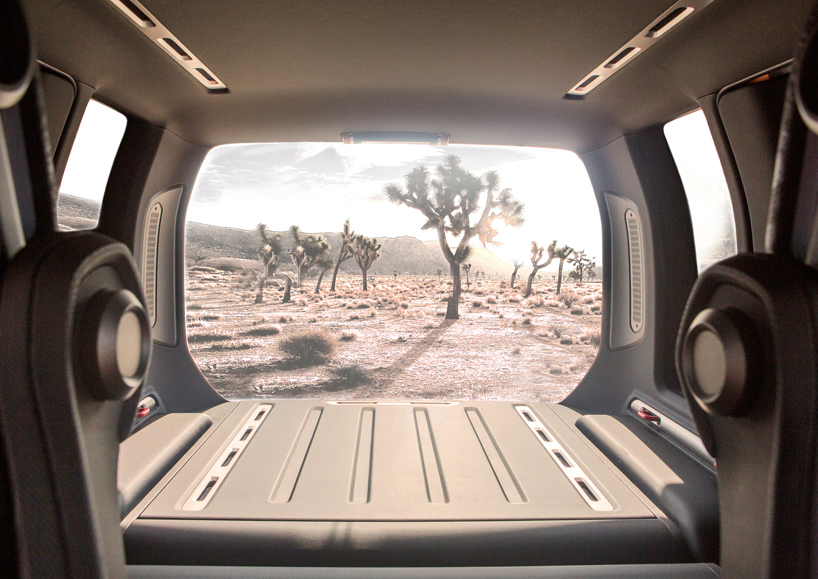 the rear ‘multi-hatch’ can open two ways: horizontally in ‘urban’ mode, and vertically in ‘outdoor’ mode. ‘urban’ splits the hatch in half and makes for easier curbside gear loading when clearance is limited. ‘outdoor’ opens the one-piece hatch upward, creating an impromptu shelter from the elements. a rotatable handle that users turn to select its opening mode, providing a satisfying mechanical touch. the deeply set handle is capable of being gripped by a gloved hand when loading, or unloading while snowboarding, or when out-and-about on a winters day. 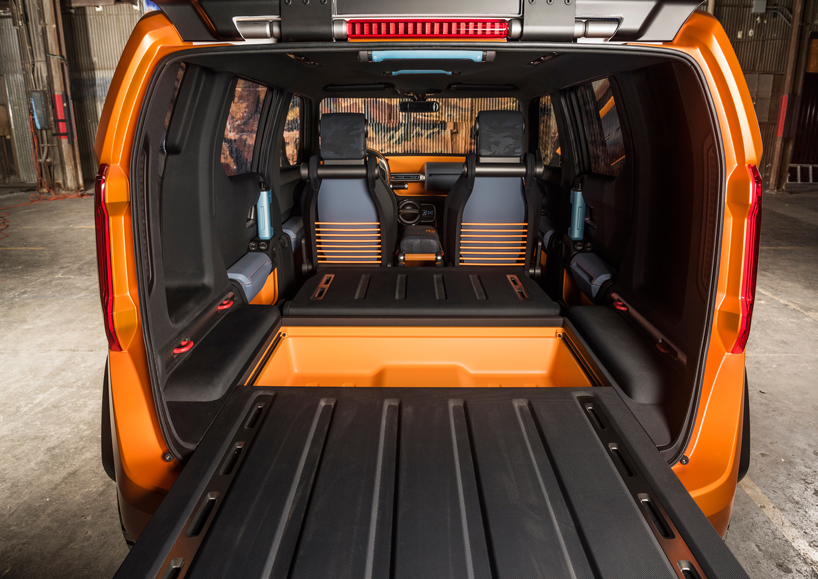 at the center of the concept vehicle’s nose is a classic, extra-large embossed toyota logo, flanked by bright LED headlamps. like the rear, reflective tie down hooks set in the lower bumper enhance the crossover’s looks and functionality. another nod to classic ‘FJ land cruisers’ and pickup models of years-goneby is the recognizable horizontal structure of the ‘FT-4X’s’ grille, headlights, and bumper. 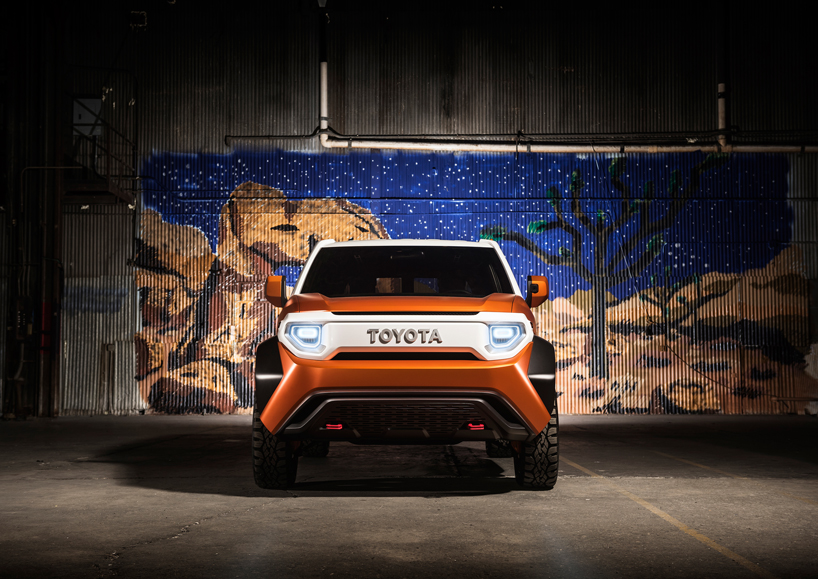 the rear cargo zone’s floor lays completely flat and features topside tracks for securing cargo. a deep storage compartment is hidden underneath, and can be accessed by sliding the floor out toward the multi-hatch, transforming the floor into a tray. diving deeper into the cabin reveals more handy features. the rear door handles serve as impromptu water bottles, while an ultra-compact the north face sleeping bag fits neatly between front passenger seats, and functions as an armrest that is strapped to an extra-large dividing console. its breathable, high-grip, hybrid mesh surface allows for wet items to dry quickly, and its bungee cord lattices keep small items in place. its armrests also have USB outlets and big, rotatable window switches. and, much like the rear’s ceiling-mounted removable flashlight, the dome light can serve as an exterior beacon. 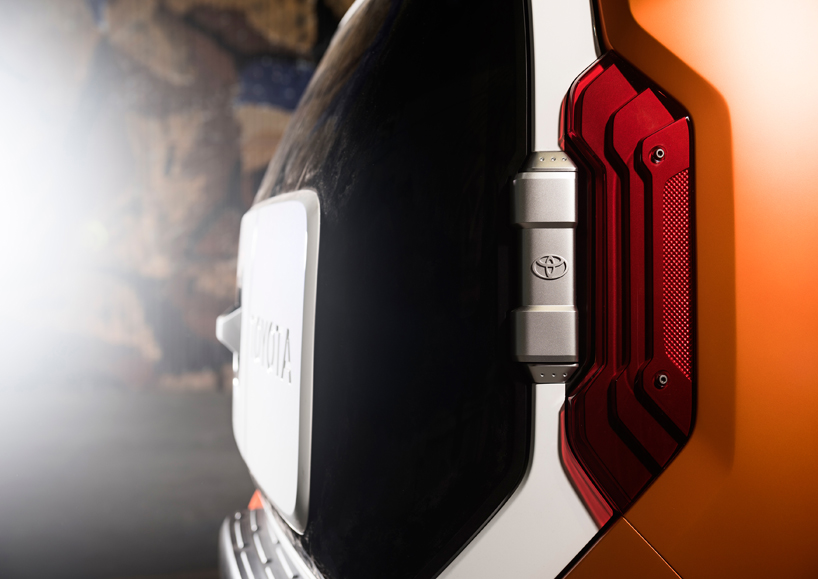 ‘you can really tell that we had a blast designing the FT-4X because it looks fun to use and fun to drive,’ comments calty studio chief designer, ian cartabiano. he continues, ‘I love this idea of mechanical satisfaction because while we’re living in today’s digital world, we took something that’s based on physical movements and made that a large part of what this vehicle is. we want everyone to interact with this car and feel a sense of delight and excitement.’