the ‘ubi-camera’ by IAMAS lets users take photographs, designating the frame with their hands

for decades, photographers, directors, and their hopefuls have framed images with their fingers, a gesture that has also come to symbolize the chance of fame for its subject. now the ‘ubi-camera’, developed by japan’s institute of advanced media arts and science (IAMAS), lets users actually capture such scenes as a digital image.

the tiny camera fits onto one index finger, while the shutter is tripped with the thumb of the other hand as it completes the framing rectangle. via infrared sensors, the device actually registers its distance from the user’s face, and calculates the image frame accordingly (see a demo in the video below from 1:11 – 1:29). zooming is accomplished in the way it always has been for ‘finger framing’: by moving one’s hands closer or further away from one’s face.

the ‘ubi-camera’ is a prototype that the design team hopes to improve by making wireless, and by improving the facial recognition sensor which currently occasionally malfunctions as a result of poor lighting conditions.

demo of the device, and discussion with yoshimasa furuyama of IAMAS video © diginfo 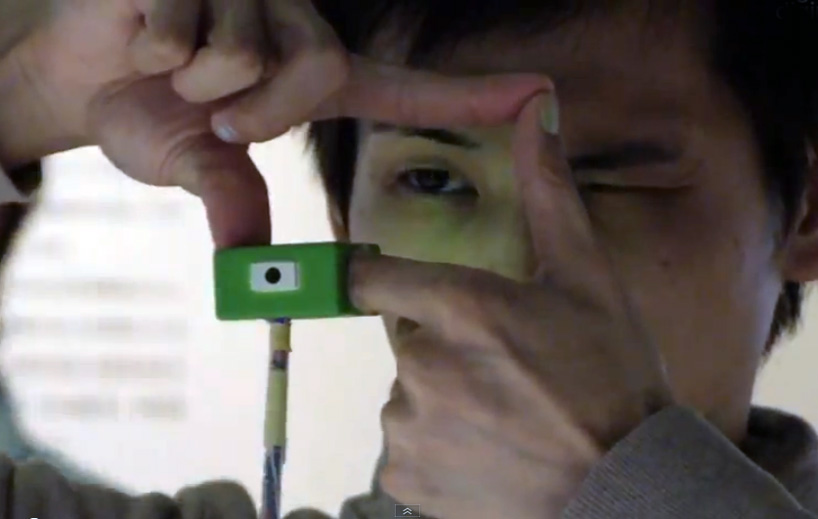 view of the front of the device, during use

May 22, 2022
mercedes unveils vision AMG as all-electric performance car of the future
the world debut of an all-electric silver arrow from AMG.
technology
436 shares
connections: +410

May 03, 2022
shine is a portable wind turbine about the size of a 1L water bottle
shine features a 40-watt turbine that can charge devices or store power in its 12,000 mAh internal lithium-ion battery.
technology
618 shares
connections: 58