On April 15, 2019, the Notre-Dame in Paris caught fire, a sight that shook the world and pushed reconstruction proposals to be deployed en masse. Commemorating that gruesome blaze is ‘Notre-Dame on Fire’, a French film directed by Jean-Jacques Annaud, which recounts the events of that day and the efforts of the people involved in saving the burning landmark — namely the firefighter brigade.

Annaud also reached out to gaming company Ubisoft, proposing to create a video game as an accompaniment to his film. Today, in partnership with Pathé Films and Annaud himself, Ubisoft is officially releasing ‘Save Notre-Dame on Fire’ as ‘a multiplayer VR escape-room experience that casts players as firefighters, and challenges them to rescue holy relics and extinguish the flames before time runs out,’ said journalist Mikel Reparaz in his interview piece with Ubisoft members. 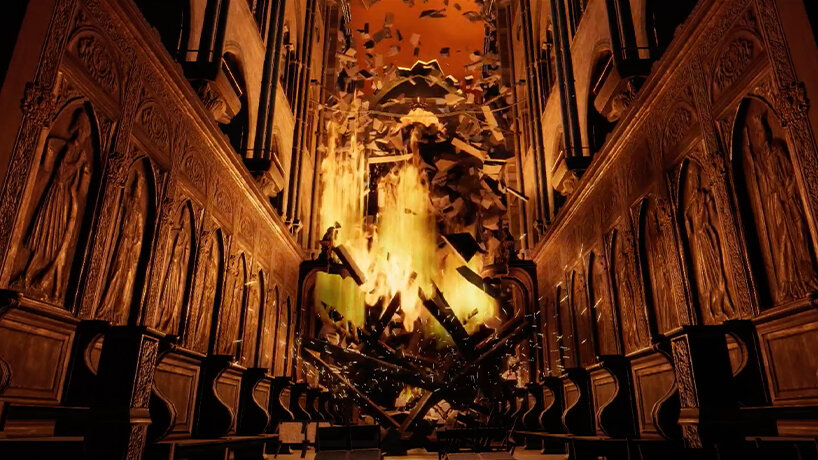 a tribute to firefighters saving a historical landmark

‘Available now at escape-game partner locations, Save Notre-Dame on Fire was created with input from firefighters who were deployed to the cathedral. During the sessions – which are meant to be played in an hour or less – players work together to keep the flames at bay, solve puzzles to find the Crown of Thorns, escape the cathedral after the collapse of its spire, and put out the fire in its bell tower,’ continued Reparaz.

Elaborating on that description, Deborah Papiernik, a Senior VP at Ubisoft (see more here), noted that the virtual rescue mission is a form of ‘edutainment’ spotlighting the cathedral’s historical significance and the need for reconstruction. Moreover, the multiplayer setup ‘pays tribute to the work of firefighters, in which collaboration and communication are essential.’ 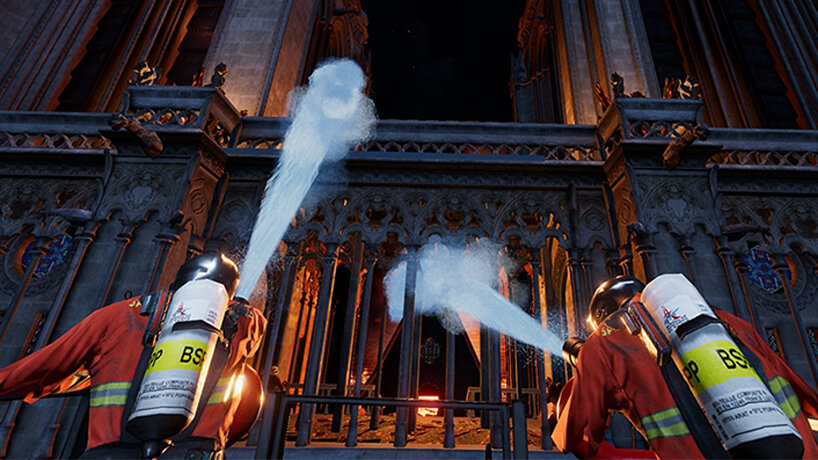 But for the seasoned online players out there, the burning of Notre-Dame brings back memories of an older game released by Ubisoft in 2014: ‘Assassin’s Creed Unity‘. In fact, the cathedral was a centerpiece of this action-adventure video game set in Paris during the french revolution. The authenticity of the game depended on artist Caroline Miousse who spent two years poring over details of the cathedral to create an accurate depiction.

Today, with ‘Save Notre-Dame on Fire’, Ubisoft took its digital rendering up a notch, depicting more details and real-life accuracy, as illustrated in one of its Instagram posts. To design the new renders, Ubisoft extracted a 2014 VR model of the cathedral, refining it as much as possible to represent the latest architectural additions. The team also based much of the game content on research and interviews conducted by Annaud (see more here) for his film. 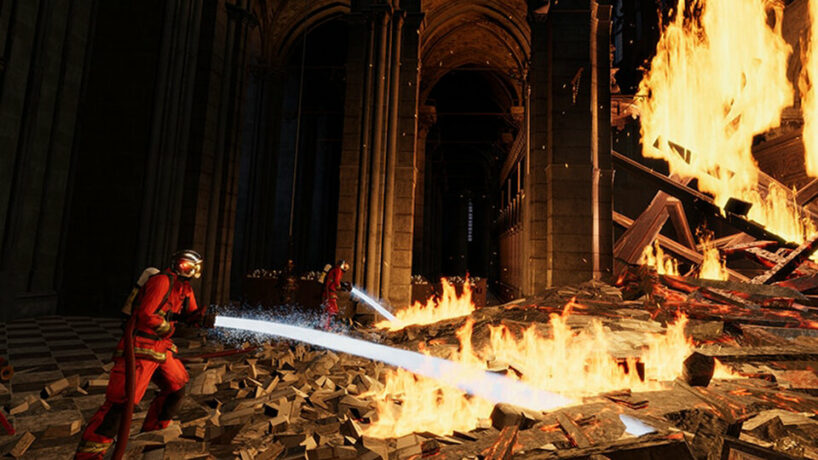 ‘It was great to have this model, which is very close to the Notre-Dame that everybody knows, which is the Notre-Dame that was created at the end of the 19th century, the one with the spire. But for the escape game, we had to add some elements that were not in that model of Notre-Dame. We had to add the north belfry and the Virgin holding the baby, which is a central figure in the film as well. We also added scaffolding – because there was scaffolding around Notre-Dame when it was burning – and the modern altar as well. Elements like that are very important, because we’re telling the story of the fire, but those did not exist in the model that we had,’ comments Papiernik. 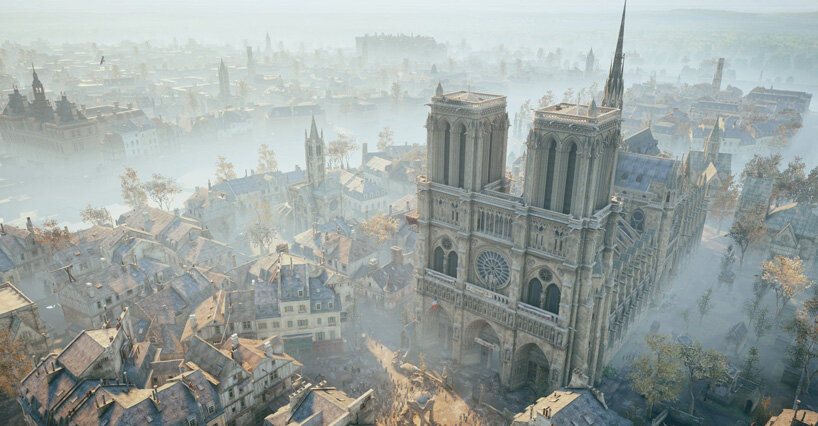 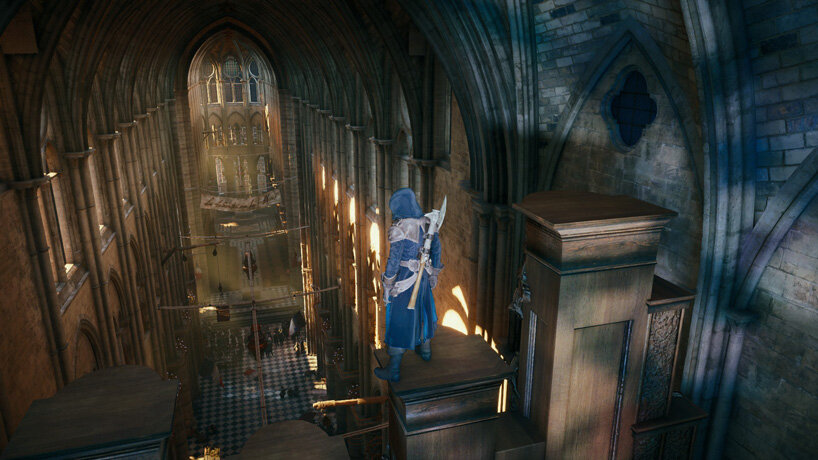 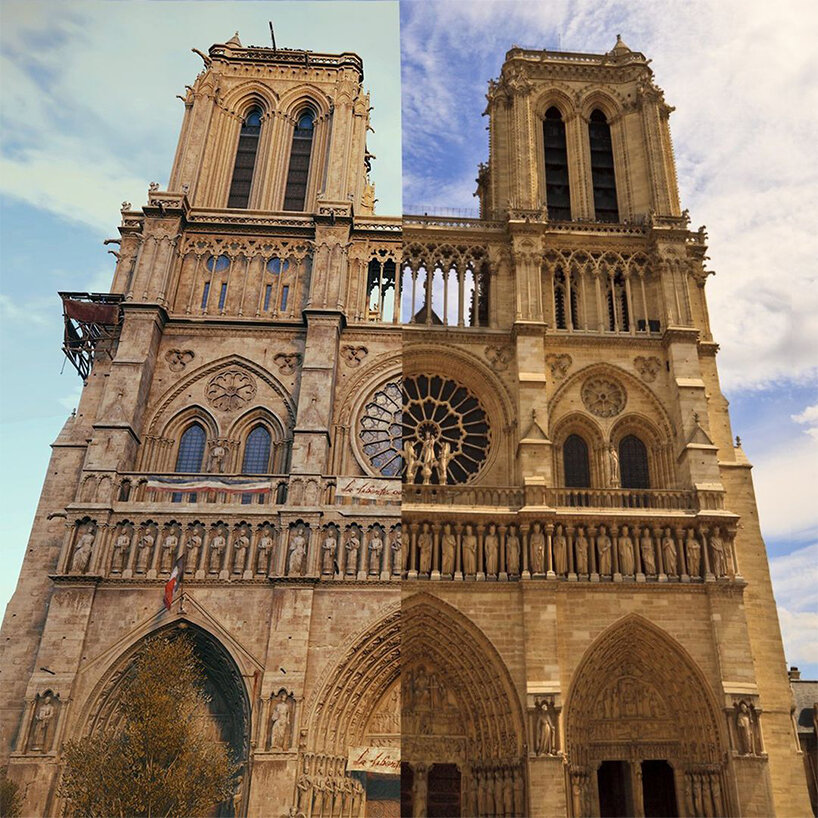 ‘real life vs video game! which is which? ‘ | image courtesy of Ubisoft via Instagram 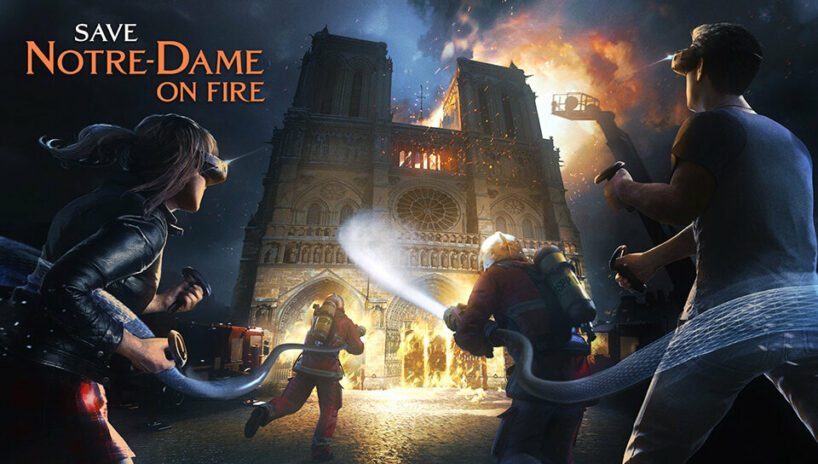 name: Save Notre-Dame on Fire