the trolley problem goes like this: you see a runaway trolley about to collide into and kill five people lying on the tracks. you are standing next to a lever that could switch the trolley to a different track, where it would collide with only one person. should you pull the lever and save five lives instead of one?

in 2014, MIT media lab designed an experiment called moral machine, a game-like platform that crowdsources people’s decisions on how self-driving cars should prioritize lives in different variations of the ‘trolley problem.’ the moral machine expanded on this ethical thought experiment, applying it to self-driving cars and the various moral decision-making they would face on the road. 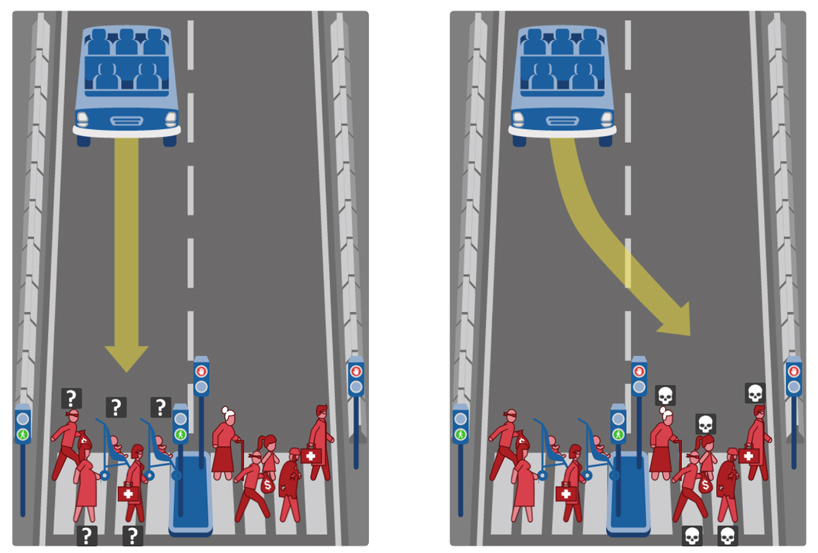 it tested nine different comparisons shown to polarize people: should a self-driving car save humans over pets, passengers over pedestrians, should it save more lives over fewer, women over men, the young over the old, the fit over the sickly, people with a higher social status, law abiders over law breakers? And finally, should the car swerve (take action) or stay on course (inaction)?

since its inception the platform has drawn information from millions of people across 233 countries and territories around the world. 40 million decisions have been logged, making it one of the largest studies ever done on global moral preferences. in a paper published by nature this data is presented data revealing how different cultures’ answer to these questions based on culture, economics, and geographic locations. 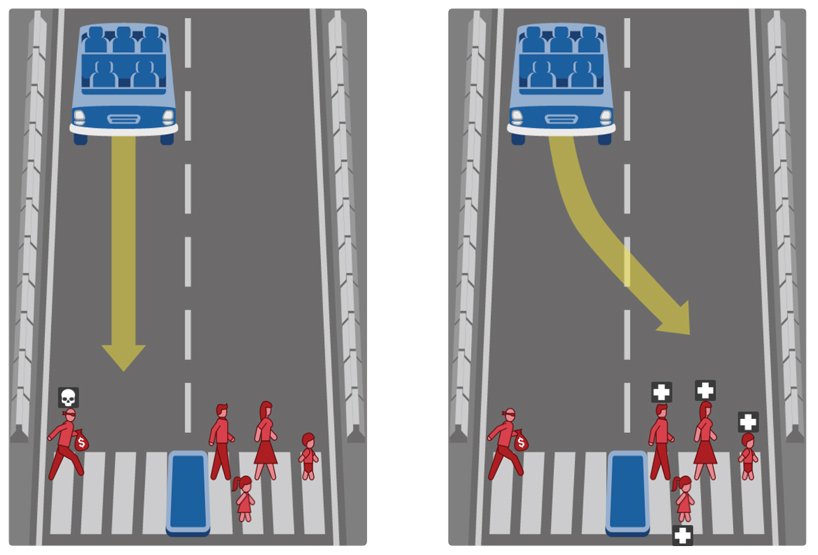 based on the results researchers hypothesized that in countries where there is greater emphasis on respecting the elderly, such as in china and japan, people were most likely to spare the old over the young. similarly, people from poorer nations – those with a lower gross domestic product (GDP) per capita – are more tolerant of people crossing the road illegally compared, and participants from countries with a high level of economic inequality show greater gaps between the treatment of individuals with high and low social status.

this video by nature video maps the results with the help of jean-françois bonnefon, a psychologise from the toulouse school of economics | header image courtesy of

the results also illustrated that people from individualistic cultures like the UK and the US were more likely to save more lives when given the opportunity, perhaps because of the greater emphasis placed on the value of each individual. this along with sparing humans over animals both emerge as global trends. the study has interesting implications for those developing self-driving cars and how best to go forward in making them marketable across the world. preferences could play a role in shaping the design and regulation of such vehicles. still, the authors of the study do not believe the results should dictate how different countries should act and in some cases felt that technologists and policymakers should override the collective public opinion.

‘the main goal is to capture how the public reaction is going to be once those accidents happen,’ says edmond awad, an MIT media lab postdoctoral associate who worked on the paper. ‘we think of this as a big forum, where experts can look and say, ‘this is how the public will react.’‘