as climate change continues to wreak havoc on the planet, people are seeking more efficient sources of renewable energy. while new technologies are developed each year to combat the issue, one ancient source of energy continues to surpass them all. that’s right, wind power continues to be one of the most cost-effective and efficient sources of sustainable energy available. however this simple technology has been perfected over the years and new and improved models continue to emerge. here is a look at the state of wind power today, from the biggest most ambitious projects to small and humble designs for personal use. 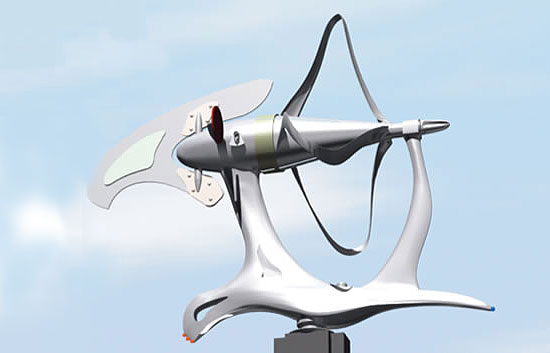 the straight wing wind turbine design is by far the most ubiquitous, but the ‘loopwing’ surpasses it is capturing energy from light winds. this japanese design also takes up less vertical space than the

conventional form. its unique blade design operates with very little vibration increasing its efficiency, achieving 43% power performance at a wind speeds of 8m/h. the design is intended to be used for small scale power generation, rather than large-scale wind farms. the ‘loopwing’ was also a winning entry in the 2006 good design awards. 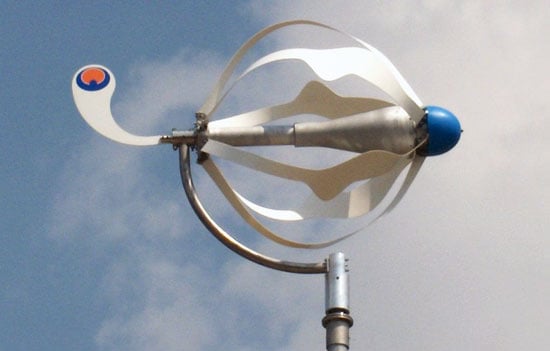 like the ‘loopwing’, the ‘energy ball’ is a small scale wind turbine designed for home and commercial use. the design is manufactured by the swedish company home energy. the design uses the venturi principle to funnel wind within the turbine’s blades, allowing the machine to operate with high efficiency and low noise. the turbine uses a set of six curved blades that spin around the center axis to create a sphere. because the blades are able to funnel a large amount of wind into a smaller area, the ‘energy ball’ remains efficient in low wind scenarios. 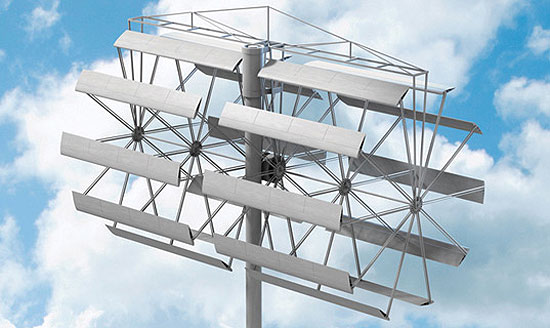 manufactured by broadstar, the ‘aerocam’ wind turbine aims to provide a large wind catching surface in a compact volume. the design features a series of long blades arranges around a circular frame, similar to a water-wheel. the blades catch the wind and spin the turbine around a horizontal axis. the design is suited for personal as well as wind farm applications and claims to be the first turbine to break the 1 usd/watt cost barrier. the device also has a low rotational speed to keep noise levels down. the product could be a viable alternative to the high cost of traditional flat-blade turbine’s but it remains a prototype at this point. 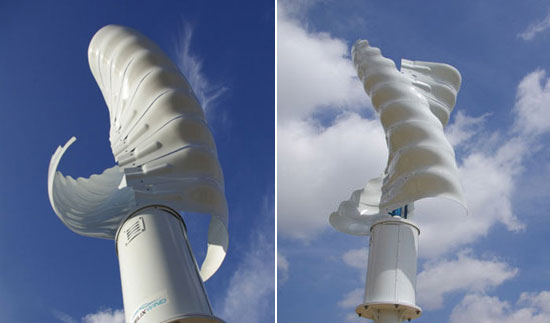 like the previous examples, ‘helix wind’ is a wind turbine designed to operate at low speeds. the ‘helix wind’ features a unique sail-like form that catches the wind over a broad surface area from all directions. this form allows the electric generator to spin with a smooth and powerful force. the design can be installed at lower heights than most wind turbines because of its form and can be used both on and off grid. the vertical spinning axis helps keep noise low and the

compact size is ideal for urban areas as well as more rural. additionally, because the scoops are more solid than individual blades, birds and other wildlife are much safer.

while we are all familiar with ground level wind turbines, but it may surprise you to know that these designs are only 20-25% efficient. the magenn air rotor is a prototype wind turbine that is made from an inflatable blimp. the helium filled blimp floats in the air at 600-1000 ft, tethered to the ground. because winds are much stronger at higher altitudes, the air rotor can operate at closer to 50% efficiency. the air rotor generate several megawatts of power and runs cheaper than grounded designs. 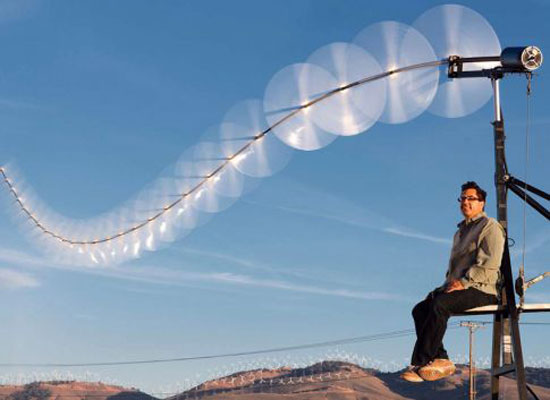 up until now wind turbines have always been installed as individual units, but doug selsam is an american inventor who developed a method for joining multiple turbines together. while normal turbine designs are big and powerful, they are also expensive and difficult to install. selsam took a smaller approach, linking multiple rotors onto the same shaft. this idea allows small and inexpensive designs to be deployed,

that aren’t as powerful as the big ones, but quite efficient. each rotor captures wind increasing the efficiency of the whole and if aligned correctly can use one tenth the material to produce the same wattage as the big boys. popular science magazine even named the ‘sky serpent’ the invention of the year in 2008. selsam is now conceptualizing ways to deploy his design on a larger scale like open sea water. 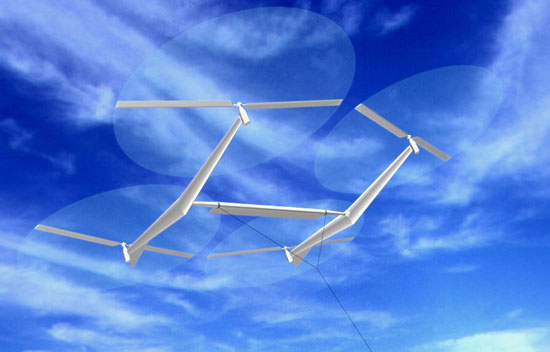 aims to literally go higher than the magenn, floating at upwards of 30,000 feet from the ground. the design is deployed at this height to capture energy from the ultra-powerful jet-stream winds. the device weighs around 1,100 pounds and could produce energy at around 2 cents /kwh. the design features four horizontal rotors which are all mounted to a frame and tether to the ground. sky windpower envisions even large models to be used as floating wind farms.

while some wind turbines go big and some go small, agustin otegui’s go nano. that’s right, the mexican designer has created wind turbines at a nano scale. ‘nano vent skin’ features a series of micro turbines combined together into a fabric that can be deployed in a variety of applications like on buildings or vehicles. while each turbine only generates a tiny amount of power, the net effect is huge, equaling that

of bigger turbines. the simplicity and small size allows the design to be deployed almost anywhere similar to solar panels.

GROW is a hybrid source for sustainable power, gathering energy from both the wind and sun through its ivy-inspired design. The project combines photovoltaic and piezoelectric technologies into one system

that can be fully monitored by the user. The cell-like design allows the system to be installed on the exterior of buildings, adapting easily to the building’s typology. It is manufactured using recycled and reclaimed materials whenever possible to minimize its environmental impact. SMIT, the sustainable design start-up behind the GROW project has been working on it for over two years and is currently working toward a market-ready version. 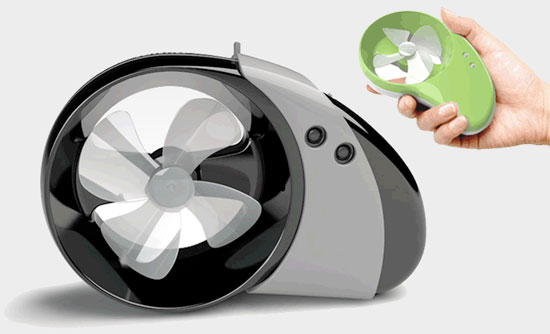 the conventional wisdom is ‘the bigger, the better’, but the ‘hy mini’ proves maybe small has its place. unlike the other turbines we have highlighted, the ‘hy mini’ takes a decidedly smaller approach to wind power. the handheld device uses a small plastic fan blade to generate a small amount of power, which is sufficient to power small gadgets like your phone or mp3 player. the device has a small battery inside which stores the power generated by the fan and makes it available to your electronics. the fan can be blown in a number of ways like walking, biking or just waving it around in the air. 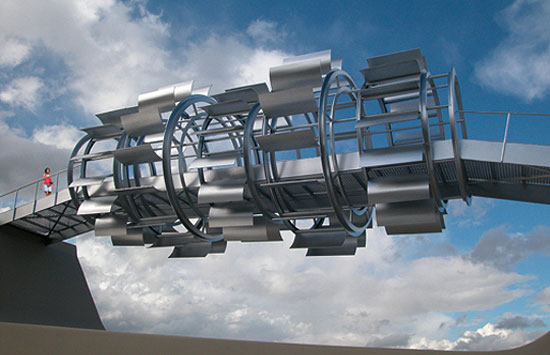 designed by architect michael jantzen, the ‘wind tunnel footbridge’ is a conceptually idea for a wind power generator that is more than just a turbine. the design uses a series of horizontal wind turbines similar to the ‘aerocam’ model, except it arranges them around a footbridge. the design is able to generate wind power but at the same time allows pedestrians to cross the bridge. the bridge would be made from steel and aluminum and feature five wheels which would turn in two directions, three one way to two the other. 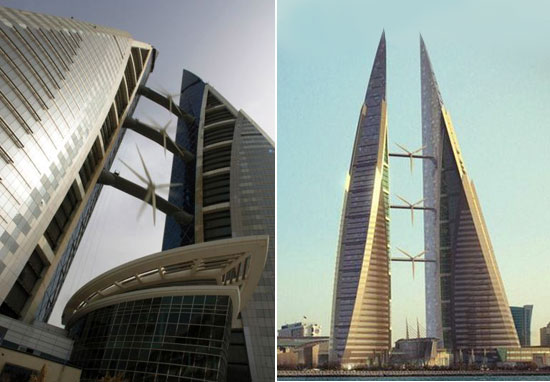 while michael jantzen’s wind tunnel footbridge takes wind power to a new level, a number of new buildings are going a step further by integrating wind turbines into their design. the ‘bahrain world trade center’ is one building using power from embedded wind turbines. it was completed last year and features three massive 29m turbines installed between its two towers. these turbines now produce around 10%-15% of the structure’s power. 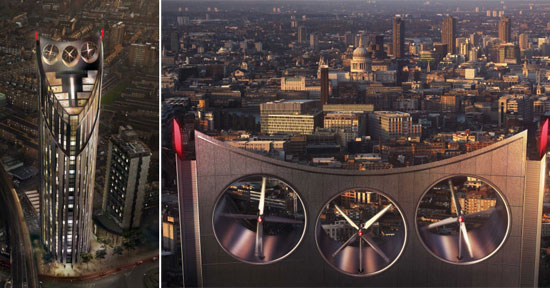 in london, a new residential tower in the city’s elephant & castle neighbourhood is being construction, which had three large turbines embedded in its peak. the eco-forward development aims to regenerate

the area with its design. the peak will hold three 9m turbines that when combined with a grey water recycling system and a district heating scheme, will make the development one of the city’s most sustainable when it is complete. 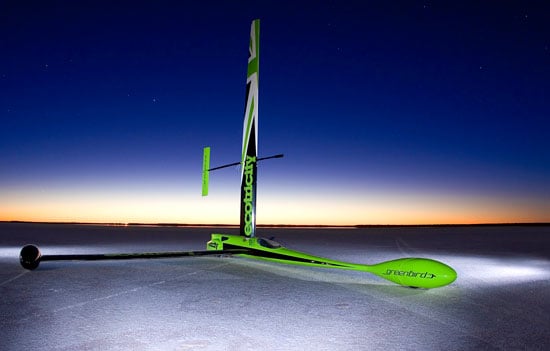 much like the inclusion of wind in buildings, there is also a growing trend toward wind powered land vehicles. however this technology is rather new and won’t be in a dealership anytime soon, if ever. one of the leading examples is a prototype vehicle called the ‘greenbird’. this super aerodynamic car owns the title of the fastest wind powered vehicle on earth. its bullet like design can be used on both dry land and ice. by using solid sails to capture the wind, the vehicle can accelerate to speeds 3 to 5 times higher than the actual wind. 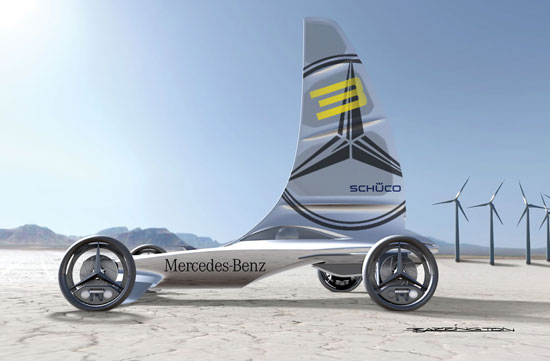 not to be outdone, mercedes benze has designed their own wind powered land vehicle. ‘formula zero’ is a shiny shark like vehicle which was designed for the los angeles challenge, a car race that takes energy efficiency into account. the design not only features a large solid sail, but also a solar panel skin which helps drive sustainable energy to the wheels.