as two-thirds of the world’s population does not yet have internet access, google’s ‘project loon‘ – a network of balloons traveling on the edge of space – is designed to connect people in rural and remote areas, helping fill coverage gaps, and bringing people back online after natural disasters. floating high in the stratosphere – twice as high as airplanes and the weather – the ‘project loon balloons’ are carried around the earth by winds and they can be steered by rising or descending to an altitude with winds moving in the desired direction. people connect to the network using a special internet antenna attached to their building. the signal bounces from balloon to balloon, which then provides a connection back down on earth.

each miniature blimp can provide connectivity to a ground area about 40 km in diameter at speeds comparable to 3G. for balloon-to-balloon and balloon-to-ground communications, the infrastructure use antennas equipped with specialized radio frequency technology. as part of the 2013 test pilot in new zealand, project loon will use ISM bands (specifically 2.4 and 5.8 GHZ bands) that are available for anyone to use. 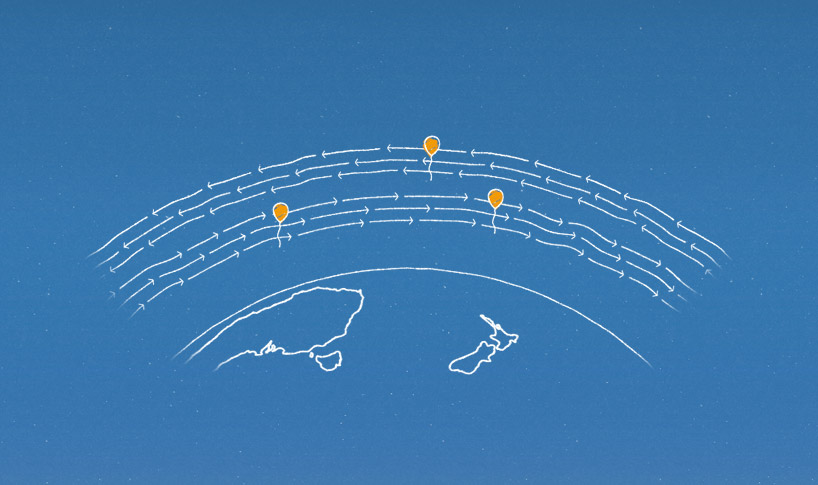 navigating with the wind

project loon balloons travel around 20 km above the earth’s surface in the stratosphere. winds in the stratosphere are generally steady and slow-moving at between 5 and 20 mph, and each layer of wind varies in direction and magnitude. the set-up uses software algorithms to determine where its balloons need to go, then moves each one into a layer of wind blowing in the right direction. by moving with the wind, the balloons can be arranged to form one large communications network. 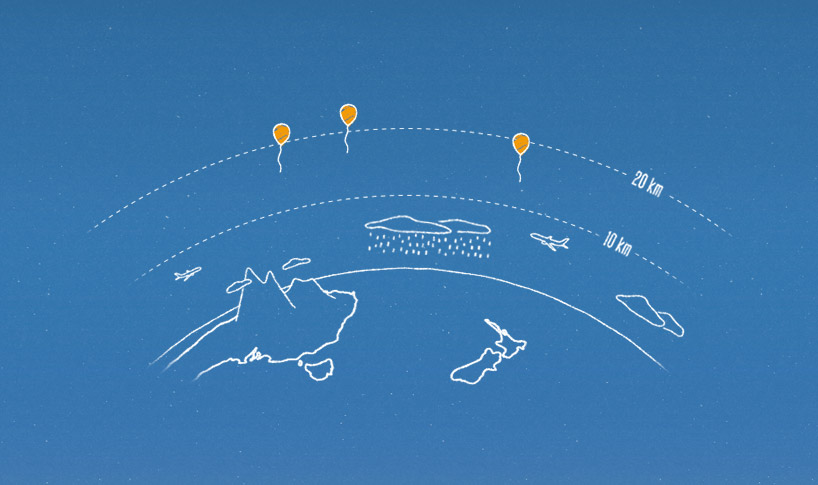 situated between 10 km and 60 km altitude on the edge of space, the extreme altitude of the stratospher presents unique engineering challenges: air pressure is 1% of that at sea level, temperatures hover around -50°c, and a thinner atmosphere offers less protection from the UV radiation and temperature swings caused by the sun’s rays. by carefully designing the balloon envelope to withstand these conditions, project loon is able to take advantage of the steady stratospheric winds, and remain well above weather events, wildlife and airplanes. 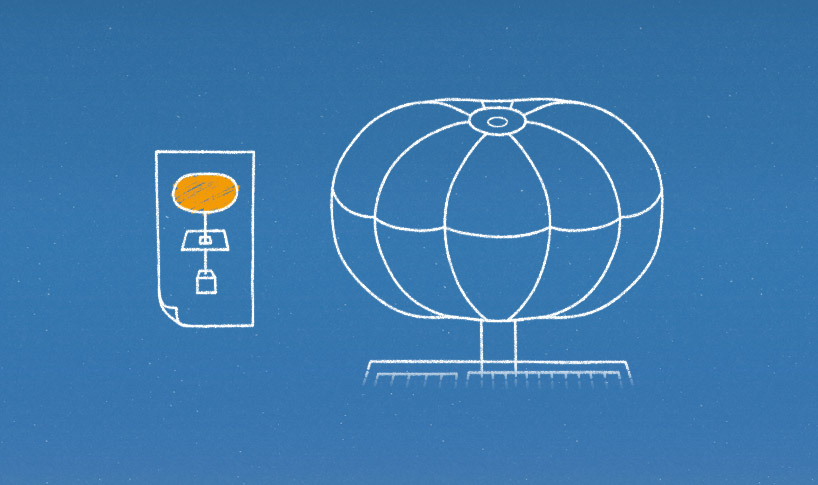 project loon’s balloon envelopes are made from sheets of polyethylene plastic and stand fifteen meters wide by twelve meters tall when fully inflated. they are specially constructed for use in super-pressure balloons, which are longer-lasting than weather balloons because they can withstand higher pressure from the air inside when the balloons reach float altitude. a parachute attached to the top of the envelope allows for a controlled descent and landing whenever a balloon is ready to be taken out of service. 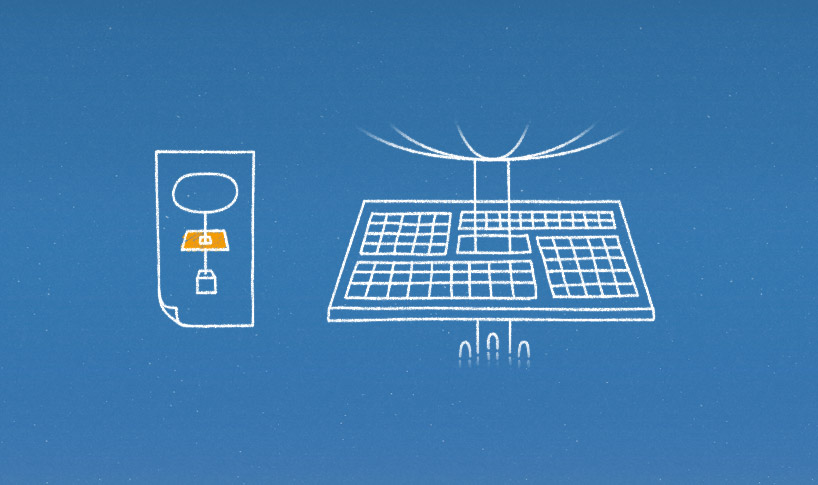 each unit’s electronics are powered by an array of solar panels that sits between the envelope and the hardware. in full sun, these panels produce 100 watts of power – enough to keep the unit running while also charging a battery for use at night. by moving with the wind and charging in the sun, project loon is able to power itself using only renewable energy sources. 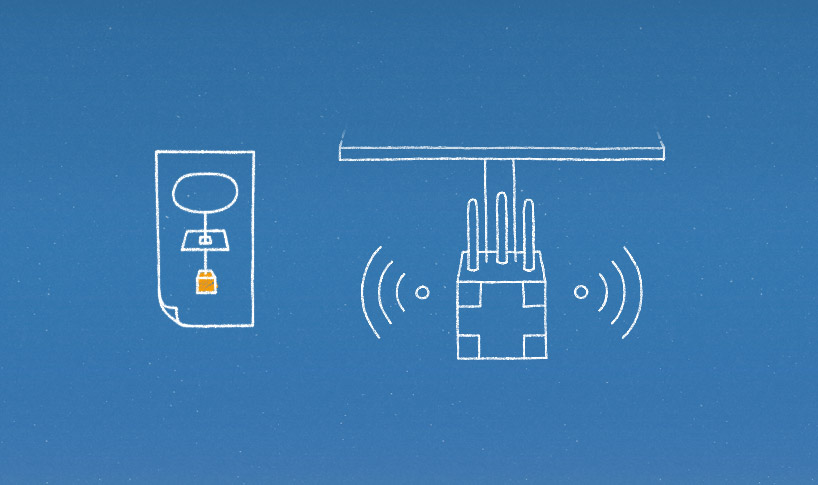 a small box containing the balloon’s electronic equipment hangs underneath the inflated envelope, like the basket that is carried by a hot air balloon. this box contains circuit boards that control the system, radio antennas to communicate with other balloons and with internet antennas on the ground, and batteries to store solar power so the balloons can operate during the night.

the project loon pilot test begins june 2013 on the 40th parallel south. thirty balloons, launched from new zealand’s south island, will beam internet to a small group of pilot testers. the experience of these pilot testers will be used to refine the technology and shape the next phase of the development 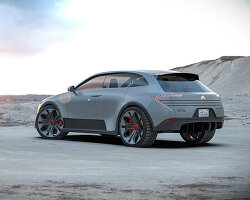 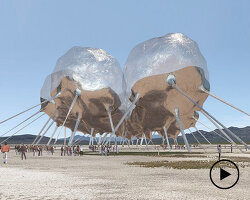 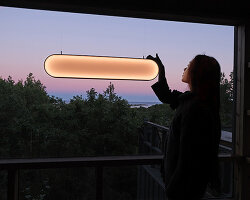